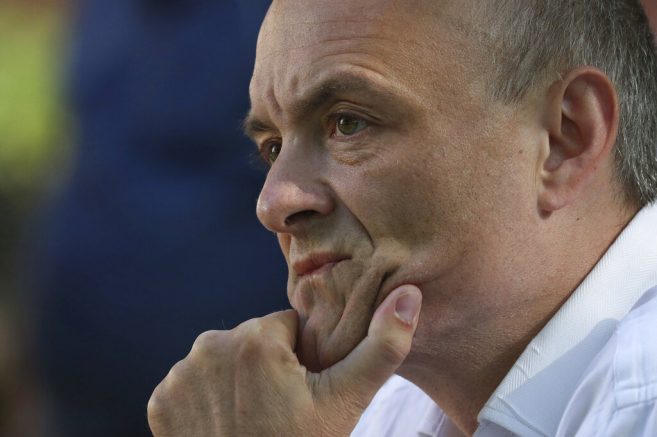 Dominic Cummings, senior aide to Prime Minister Boris Johnson, makes a statement inside 10 Downing Street, London, Monday May 25, 2020, over allegations he breached coronavirus lockdown restrictions. In an exceptionally rare televised statement, Cummings gave a detailed account of his movements in late March and early April, which have caused an intense political storm. (Jonathan Brady/Pool via AP)

Citizens in the U.K. are divided on whether Dominic Cummings, advisor to the prime minister, should resign after being caught in a lockdown scandal.

Cummings received criticism after being caught traveling with his family during lockdown orders after his wife reportedly had developed coronavirus symptoms. In a response to the allegations Cummings has said he does not regret what he did, stating his trip was “reasonable.”

Defenders of Cummings said he was following his “fatherly instincts” in trying to find childcare for his son, while others argue his actions undermine the message behind the home lockdowns.

“It feels vindictive to say that he should go, but I do think you need to feel you’ve got a government you can trust and has integrity,” said Catherine Andrews, local resident of London, England. “And I know that’s what the prime minister has been saying, that this man has integrity, but it does feel (like it)…double standards…he could have done better and there are lessons that he can learn.”

Prime Minster Boris Johnson has come to the defense of Cummings, which has angered many politicians. Junior Minister Douglas Ross recently resigned over the handling of the issue.

FILE – In this June 3, 2020, file photo, a protester waves a city of Chicago flag emblazoned with the acronym BLM for Black Lives Matter, outside the Batavia, Ill. (AP Photo/Nam Y. Huh, File) […]

OAN NEWSROOM UPDATED 12:00 PM PT – Sunday, May 29, 2022 A Republican congressman sparred with the Education Secretary Miguel Cardona over the role of gender in the education system. One America’s Tom McGrath has […]

DETROIT—Hyundai is recalling more than 390,000 vehicles in the United States and Canada for two problems that can cause engine fires. In one recall, owners are being told to park their vehicles outdoors until repairs […]