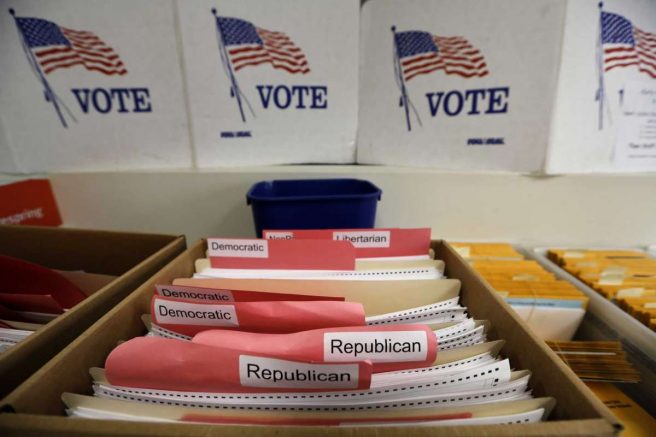 In this April 14, 2020 photo, ballots for the primary elections are arranged by party affiliation at the Lancaster County Election Committee offices in Lincoln, Neb. (AP Photo/Nati Harnik)

Both sides of the political aisle are battling over whether mail-in ballots should be a widespread practice for the upcoming general election.

The United States cannot have all Mail In Ballots. It will be the greatest Rigged Election in history. People grab them from mailboxes, print thousands of forgeries and “force” people to sign. Also, forge names. Some absentee OK, when necessary. Trying to use Covid for this Scam!

The president has been vocal about his opposition to absentee voting throughout the pandemic, but has also argued it’s sometimes necessary in certain instances.

Several Democrat election officials have increased efforts to issue mail-in ballots to residents and believe it will minimize the risk of coronavirus infections.

Presumptive Democrat presidential nominee Joe Biden also weighed in on the issue by arguing there’s no evidence that voter fraud is tied to mail-in ballots.

“We ought to be able to make sure that we have ballot by mail, early voting and in-person voting,” he stated. “You’re able to do that if, in fact, you have enough poll workers ahead of time, they’re trained.”

However, several states have had issues with mail-in ballot systems amid recent elections, which caused thousands of votes to be miscounted.

Last week, New Jersey officials had to throw out more than 3,000 mail-in ballots after their mishandling raised suspicions of voter fraud.

Then in Wisconsin, election officials experienced technical issues during their April 7 primary. This resulted in nearly 2,700 ballots being misplaced and not reaching voters’ homes.

“There’s always a concern that something would happen., but I hope what we’ve done would eliminate that or keep that at a minimum,” said Dave Shively, Lancaster County Election Commissioner.

Meanwhile, several lawsuits are being brought against several states, including California, Texas and Virginia. Residents are challenging states’ authority to implement mail-in voting.

GENEVA—Two-time Olympic 800-meter champion David Rudisha will not defend his title at the Tokyo Games. Rudisha’s agent, Michel Boeting, told The Associated Press on Thursday that Tokyo was “out of the question” for Rudisha because […]

Former acting Defense Secretary Christopher Miller told members of Congress on Wednesday that he has reassessed his earlier claim that former President Donald Trump incited the Jan. 6 Capitol riot. “I think now I would […]