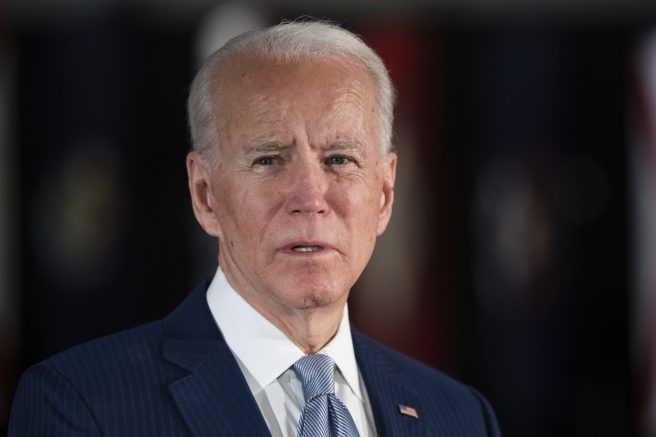 FILE – March 10, 2020, file photo, Democratic presidential candidate former Vice President Joe Biden speaks to members of the press at the National Constitution Center in Philadelphia. Biden is the presumptive Democratic nominee. But the process of making it official is anything but settled. (AP Photo/Matt Rourke, File)

Former Vice President Joe Biden has recently been pressed on sexual harassment claims made by his former staffer Tara Reade.

During an interview Thursday, he said while the allegations should be taken seriously, he also believes they should be “thoroughly vetted.”

The presumptive Democrat 2020 presidential nominee went on to claim he does not remember Reade, who worked for him during his Senate tenure. He also noted that her story “changes considerably.”

Biden was also questioned on what he would tell voters who are torn on whether or not to cast their ballot for him. He made the following remarks on the matter:

Biden’s comments follow a letter sent to his campaign by Reade’s lawyer, which called for his Senate papers to be released.

Meanwhile, the America Rising Political Action Committee released a new ad which suggests Biden is part of the “deep state” swamp of corruption.

The ad, posted Thursday, claims Biden has only had one job for his entire life and has no real-life experience beyond being a career politician.

Joe says it best himself: “My time is up.”

The ad concludes that Biden is just another do-nothing career politician who has been trying to become president for the past 32 years.

FILE – In this April 12, 2022, file photo, Oklahoma Gov. Kevin Stitt speaks after signing into law a bill making it a felony to perform an abortion, punishable by up to 10 years in […]

NEW DELHI—Delhi’s biggest crematorium ground, the Nigam Bodh Ghat, has seen a rapid surge in cremations in the last week. On April 24 there are dead waiting in the ambulances outside; dead being carried by […]