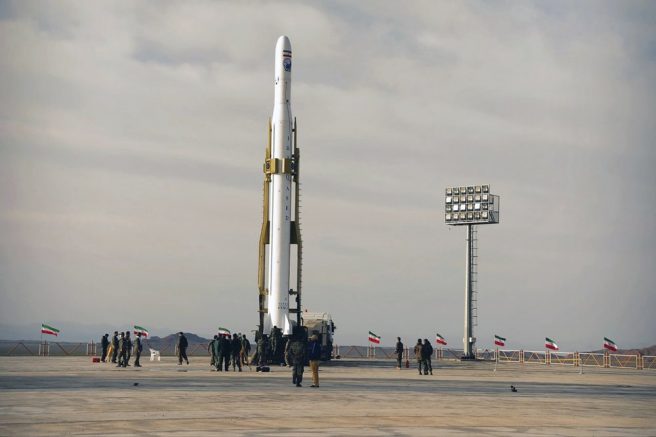 In this photo released Wednesday, April 22, 2020, by Sepahnews, an Iranian rocket carrying a satellite is prepared for launch from an undisclosed site believed to be in Iran’s Semnan province. (Sepahnews via AP)

Iran’s ayatollah regime is reportedly building yet another weapons storage facility in Syria. Recently released satellite images revealed Iranian paramilitaries working on a major construction project at the Imam Ali Military Base near the Iraqi-Syrian border.

According to intelligence officials, the new facility may pose a threat to Israel and U.S. military personnel in Iraq.

The images were released on the heels of Secretary of State Mike Pompeo’s visit to Israel.

U.S. commitment to #Israel has never been stronger. Speaker of Knesset @gantzbe and I discussed ways to strengthen U.S.-Israeli coordination in the fight against #COVID19 and our continued line of efforts to counter Iran’s dangerous activity in the region and around the world. pic.twitter.com/Oz6OYarLas

The Jewish state has warned of a lingering military threat posed by the ayatollah regime.

“There is something else plaguing our region, which is the unremitting Iranian aggression and terror,” stated Prime Minister Benjamin Netanyahu. “I want to express my appreciation for the strong position that the president, you and your administration put forward against Iran.”

This latest construction came after the Israeli military bombed a similar Iranian facility in Syria back in March.

Nurse dead, 4 others injured in shooting at Minn. clinic

This booking photo released by the Wright County, Minn., Sheriff’s Office shows Gregory Paul Ulrich who was arrested Tuesday, Feb. 9, 2021, following a shooting at a health clinic in Buffalo, Minn. Ulrich, unhappy with […]