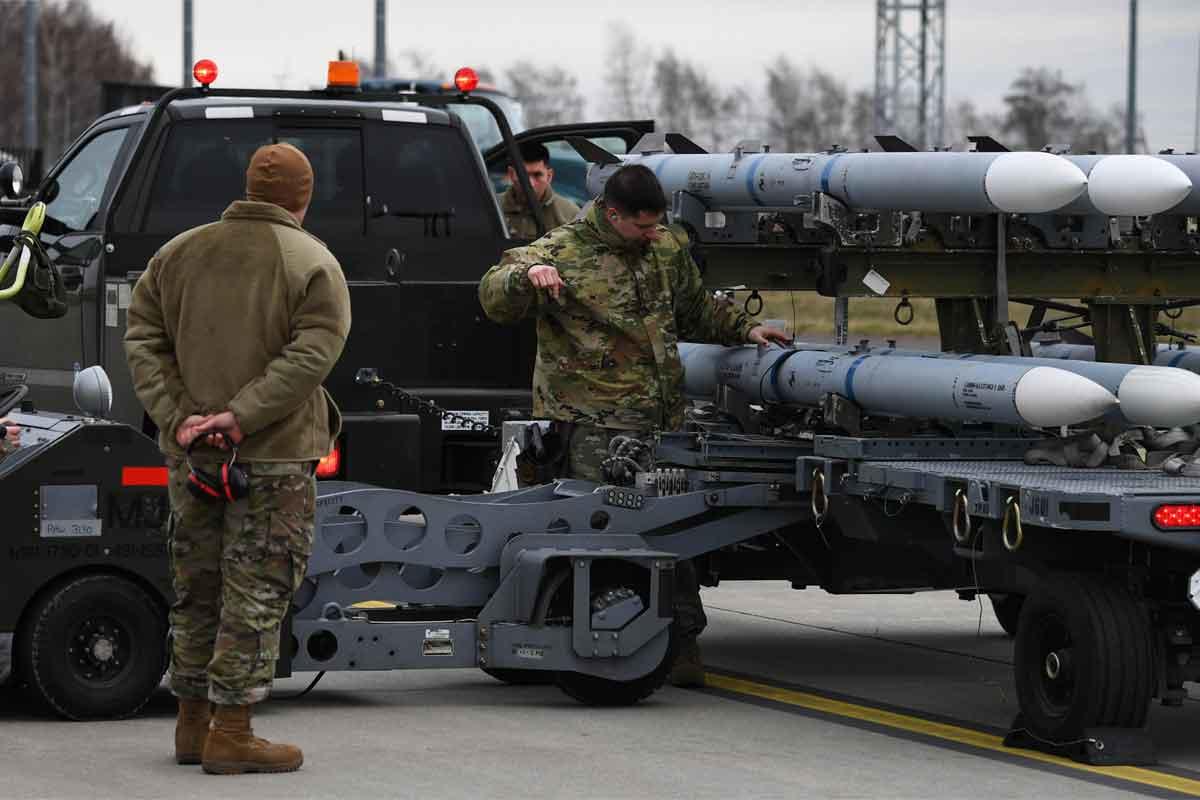 Air Force officials want to build bases in Europe that are almost as agile as the service’s combat units, going up in a matter of weeks to support regional combat operations, and coming down again just as quickly as units shift to a new location.

And the global pandemic hasn’t slowed the Air Force’s efforts to develop this concept, the service’s top general in Europe said this month.

As part of an Agile Combat Employment, an initiative to build small hubs to house quick-reaction forces across the continent, U.S. Air Forces Europe squadrons are now working virtually to plan how ammunition, vehicles, shelters, and logistics and support equipment for aircraft can easily be moved to austere locations, said Gen. Jeffrey Harrigian, USAFE-AFAFRICA’s top officer. The work on ACE hasn’t stopped amid the pandemic, he said.

For the last two months, USAFE has been circulating a strategy for its ad hoc basing effort, Harrigian said in an interview last week. In some cases, doing the planning amid the pandemic allowed airmen and officials to band together to flesh out the strategy, he said.

“It did allow us to fine-tune the [concept of operations], produce it and socialize that with our friends across Europe,” Harrigian said May 7.

For example, working through the plans has alerted officials to the fact that airmen need to be more adaptable in a constantly changing environment. “We recognize that if we’re going to have these small packages of capabilities spread out across the [area of operations], we’re going to need ours to be multi-capable [instead of] experts just in their functional area,” Harrigian said.

He told reporters during the annual Air Force Association Air, Space and Cyber conference last September that the service was still determining the locations of future remote bases and runways in Europe, despite the effort being nearly five years old.

Harrigian said the mission objectives plan was recently distributed to U.S. military units in Europe, as well as to NATO countries that want to partake in the initiative.

“As you look at an overarching construct, you have to take a bottom’s up approach to this and leverage the expertise at the wings to really understand how we can operate [for] what we’re trying to do here,” he said. “Naturally, over COVID, we [aren’t] able to do some of the activities, but we are already looking at restoring those opportunities to train.”

One example is the 52nd Fighter Wing out of Spangdahlem Air Base, Germany. The airmen had an ACE exercise planned shortly after Defense Secretary Mark Esper’s stop-movement order was put in place.

Instead of canceling the exercise, the airmen “adapted their original plan by designating a simulated ACE location on the far side of the flight line,” said command spokeswoman Lt. Col. Davina Petermann.

“The wing commander decided they could still meet their training objectives while complying with the physical distancing and gathering restrictions,” she said in an email.

Harrigian added, “The big idea is really about being operationally unpredictable to drive problems for the adversary, and then allowing us to win at the time and place of our choosing.”

He mentioned that a similar concept is underway in the Pacific theater under the purview of Gen. Chalres “CQ” Brown, the nominee to be the next Air Force chief of staff.

But unlike in the Pacifiic, “We don’t have some of the distance challenges that PACAF would have” when operating in a singular region, Harrigian said.

Reiterating comments he made in September, he said the training opportunities should be safe from big budget hits despite Pentagon efforts to repurpose funds meant for units in Europe through the European Deterrence Initiative to the U.S. border wall.

The EDI — formed in 2014 as a result of Russia’s annexation of Crimea and originally called the European Reassurance Initiative — has helped the U.S. military’s ambitious outreach to partners in Europe, especially in the modular infrastructure initiatives, according to officials.

Gen. Tod Wolters, head of U.S. European Command, earlier this year characterized the EDI as a “success,” especially for increasing readiness among the forces rotating to and from the continent.

As of last month, the Defense Department was working to defer or cancel 19 additional military construction projects, including $274 million just in Europe, to reallocate more funding toward the barrier along the U.S.-Mexico border, according to Defense News. In September, Esper approved diverting $3.6 billion in military construction efforts in both the U.S. and abroad, with roughly 30 of the projects spanning places like Estonia, Bulgaria and Hungary.

“Broadly, the impacts will be minimal in terms of our ability to execute the training that we have designed thus far,” Harrigian said. “There are going to be some infrastructure areas that were deferred and moved to the out years, but as we are continuing to refine the way we execute [operations], it’s been very minimal.”

ACE will continue as long as allies and partners align with its cause, he added.

“This has got to be a partnership,” Harrigian said. “In this environment, we have got to be aligned with our teammates across Europe, to be able to not only leverage their expertise, but some of the capabilities they have to get after the big idea here.

“By working with partners will help better inform our ability to operate from those locations,” he said, which could apply to the far north in the Arctic circle to countries in Eastern Europe.

“That’s what we’re trying to do,” Harrigian said.

WASHINGTON (AP) — Tensions between the White House and Pentagon have stretched to near a breaking point over President Donald Trump’s threat to use military force against street protests triggered by George Floyd’s death. Friction […]

A federal grand jury indicted the former chief of cardiology at the Department of Veterans Affairs‘ Palo Alto Medical Center on charges of sexual battery, alleging that he assaulted another VA doctor when the two […]