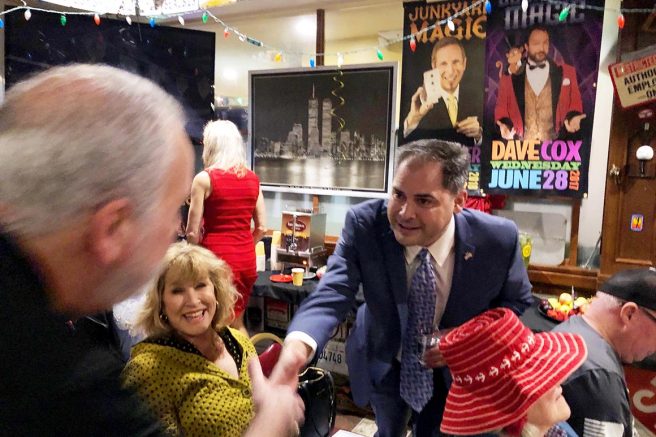 The president has endorsed former Navy pilot Mike Garcia for Congress. President Trump took to Twitter on Saturday, where he announced Mike has his complete and total endorsement.

He called the congressional candidate for California’s 25th district a great fighter pilot, a hero and a brilliant Annapolis graduate. The president added that Mike “will never let you down.”

Mike has my complete & total endorsement. We need him badly in Washington. A great fighter pilot & hero, & a brilliant Annapolis grad, Mike will never let you down. Mail in ballots, & check that they are counted! https://t.co/KMS62yCyfl

Garcia has said he is running to ensure Californians do not fall victim to socialist and far-left Democrat policies, which he claimed have already devastated much of the state.

“I left the 25th district in 1994 to serve my nation. I was blessed to attend the U.S. Naval Academy and fly combat missions over Iraq as a 5-18 pilot. I came home in 2009, because there’s no better place to live in this world. After 10 years of a career in real estate and aerospace, I’m called again to serve my nation, this time in Congress.” – Mike Garcia, Republican congressional candidate

A special election is set to take place on May 12th, when Garcia will have to beat out Democrat candidate and current state assemblywomen Christy Smith. The winner will replace Rep. Katie Hill, who resigned from the seat in November of 2019.

Secretary of State Mike Pompeo speaks during a press briefing at the State Department on Wednesday, May 20, 2020, in Washington. (Nicholas Kamm/Pool Photo via AP) OAN NewsroomUPDATED 6:36 AM PT — Monday, June 1, […]

Commentary Because former Attorney General William Barr failed to hold anyone accountable for the Democratic Party and FBI’s dirty tricks campaign against Donald Trump, Russiagate lives on. Indeed, recent news reports show that it has […]

Street Racing Surges Across US Amid Coronavirus Pandemic

Jaye Sanford, a 52-year-old mother of two, was driving home in suburban Atlanta on Nov. 21 when a man in a Dodge Challenger muscle car who was allegedly street racing crashed into her head-on, killing […]