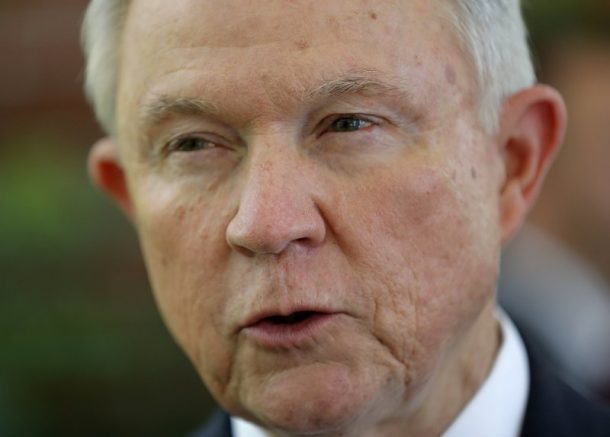 U.S. Attorney General Jeff Sessions is interviewed by The Associated Press at the U.S. Embassy in San Salvador, El Salvador, Thursday, July 27, 2017. Sessions is forging ahead with a tough-on-crime agenda that once endeared him to President Trump, who has since taken to berating him. Sessions is in El Salvador to step up international cooperation against the violent street gang MS-13. (AP Photo/Pablo Martinez Monsivais)

Former Attorney General Jeff Sessions is calling out lawmakers who support proposals to bring more foreign workers into the country amid the ongoing coronavirus pandemic.

During an interview Monday, Sessions questioned why anyone would want to bring in foreign nationals to take jobs in the U.S. while so many Americans are unemployed. He added that it’s critical that lawmakers defend the interests of American citizens who have been laid off due to the economic impact of the coronavirus.

The comments came after Sessions released a statement last month calling for a moratorium on employment-based immigration until the unemployment rate drops.

“Why would we bring in foreign workers to take jobs when we don’t have jobs for the American people?” he asked. “What theory is it that they’re operating under when they try to justify such a policy position? It’s certainly not in the interest of the American people.”

Sessions also suggested a congressional committee should be formed to determine the truth behind China’s involvement in spreading the virus to the rest of the world.

China now faces a choice: Will it be a responsible nation, or an outlaw nation?

This week, I am renewing my call for the creation of a Select Committee of Congress to investigate the origins and cover-up of the Wuhan Virus. https://t.co/IdHh673Mut #BettingOnAmerica

OTTAWA—Canada will have to wait a little longer for a promised influx of COVID-19 vaccines. The federal government says it expects about 1 million shots of the Pfizer-BioNTech vaccine to arrive this week, as the […]

An activist carries the Spanish message “Amid hunger there is no quarantine” during a protest in Buenos Aires, Argentina. (AP Photo/Natacha Pisarenko) OAN NewsroomUPDATED 2:35 PM PT — Wednesday, May 13, 2020 Citizens of Argentina […]