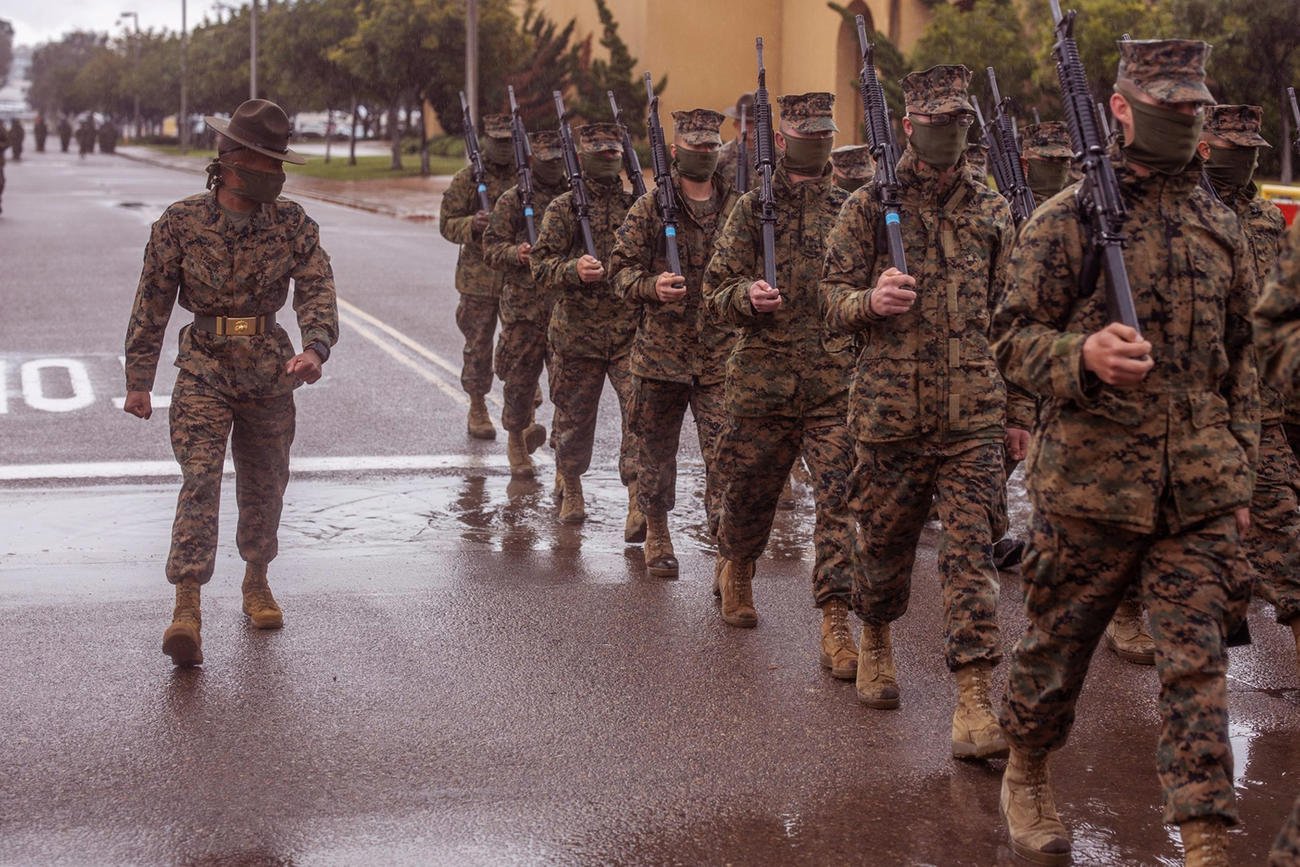 The Marine Corps has halted training for a company of recruits who arrived at boot camp on the West Coast last month after about four dozen of them tested positive for the illness caused by the coronavirus.

Members of Bravo Company, 1st Training Battalion were about five days into their training at Marine Corps Recruit Depot San Diego when one began showing symptoms for COVID-19. That recruit tested positive and was immediately moved into isolation, said Capt. Martin Harris, a spokesman for the training base.

That led to follow-on testing and contact analysis to identify anyone who’d been in close contact with the sick recruit. All of Bravo Company eventually tested, Harris said, leading to about four dozen recruits testing positive for the virus.

Most of those recruits showed no symptoms for the illness, he added. That has led the training depot to change the way it’s receiving shipments of new recruits.

“While these positive cases are currently isolated to one company and in quarantine, the increase of asymptomatic positive tests has prompted the testing of all personnel in quarantine and all recruits that arrive on the depot in the future, whether or not they present symptoms,” Harris said. “All the recruits that have entered the 14-day staging period are healthy and are being screened by medical personnel several times each day and remain in contact with their families to keep them informed.”

It’s a similar approach being taken on the East Coast, where the Marine Corps had already battled dozens of COVID-19 cases at boot camp. Two asymptomatic recruits there are believed to have spread the virus to other members of their training company, along with drill instructors, at Marine Corps Recruit Depot Parris Island in South Carolina.

The new outbreak in San Diego was first reported by Marine Corps Times. No one outside Bravo Company has tested positive for COVID-19 in San Diego, Harris said. A couple drill instructors assigned to the company have also tested positive and have been moved into isolation, he added.

The Marine Corps has put a host of new safety measures in place at its entry-level training camps for new enlistees and officers to help prevent the spread of COVID-19. That was after several recruiters in New York, the epicenter of the country’s coronavirus outbreak, sounded alarms about the service’s decision to continue shipping new trainees to boot camp — especially from states with high case rates.

Recruits and drill instructors are now required to wear face masks and practice social distancing by keeping at least 6 feet of space between people when possible. The Marine Corps has also canceled graduations and other family day events that typically bring hundreds of people onto the depots at a time.

Entry-level training camps and Navy ships have proven to be some of the trickiest places for the military to curb the spread of COVID-19 during the global pandemic. At least two Navy ships, where sailors live in tight quarters, have been sidelined as the vessels are evacuated.

All the military branches this month put a pause on sending new shipments of recruits to boot camp as facilities were prepared to house them in isolation before officially beginning training.

That hasn’t happened at Marine Corps Recruit Depot San Diego yet, but officials will be closely monitoring the number of COVID-19 cases new recruits might bring to the base.

“We continue to take deliberate and proactive measures as we continue to adapt and react to the changing situation,” Harris said.

The Defense Health Agency and its Tricare pharmacy benefits manager, Express Scripts, are limiting prescriptions for several medications used by hospitals to treat patients with the novel coronavirus. Pentagon officials said last week they have […]