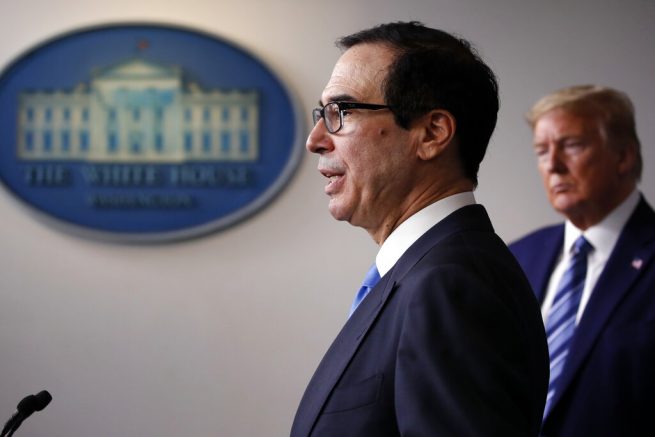 Treasury Secretary Steven Mnuchin has warned any company who accepts at least $2 million from the small business loan program will be audited.

Mnuchin made those remarks in an interview Tuesday. He said the decision is meant to help keep small businesses running, while holding big businesses who abuse the process accountable for their actions.

This came after several large companies were found taking out loans from the program. Some of them exploited a loophole to take out multiple loans at one time.

In the initial round of Paycheck Protection Program funding, @SBAgov provided nearly $350 BILLION to more than 1.6 million small businesses, including 1 million with ten or fewer employees.

The Paycheck Protection Program is meant to aid companies with fewer than 500 employees. Secretary Mnuchin said the loans will be investigated before a company can be forgiven by the government.

FILE – In this Nov. 3, 2020, file photo, election inspectors are reflected in a window at right as they begin processing ballots while a voter outside arrives to drop a ballot into an official […]

Sen. Durbin says Clinton is ‘flat out wrong’ for advising Biden to ‘not concede under any circumstances’

Sen. Dick Durbin, D-Ill., pays respects as Justice Ruth Bader Ginsburg lies in repose under the Portico at the top of the front steps of the U.S. Supreme Court building on Wednesday, Sept. 23, 2020, […]

A man who was homeless as a child and lived on the streets with his parents has beaten the odds and is now set to enter a doctoral program at UCA in the fall. Mich […]