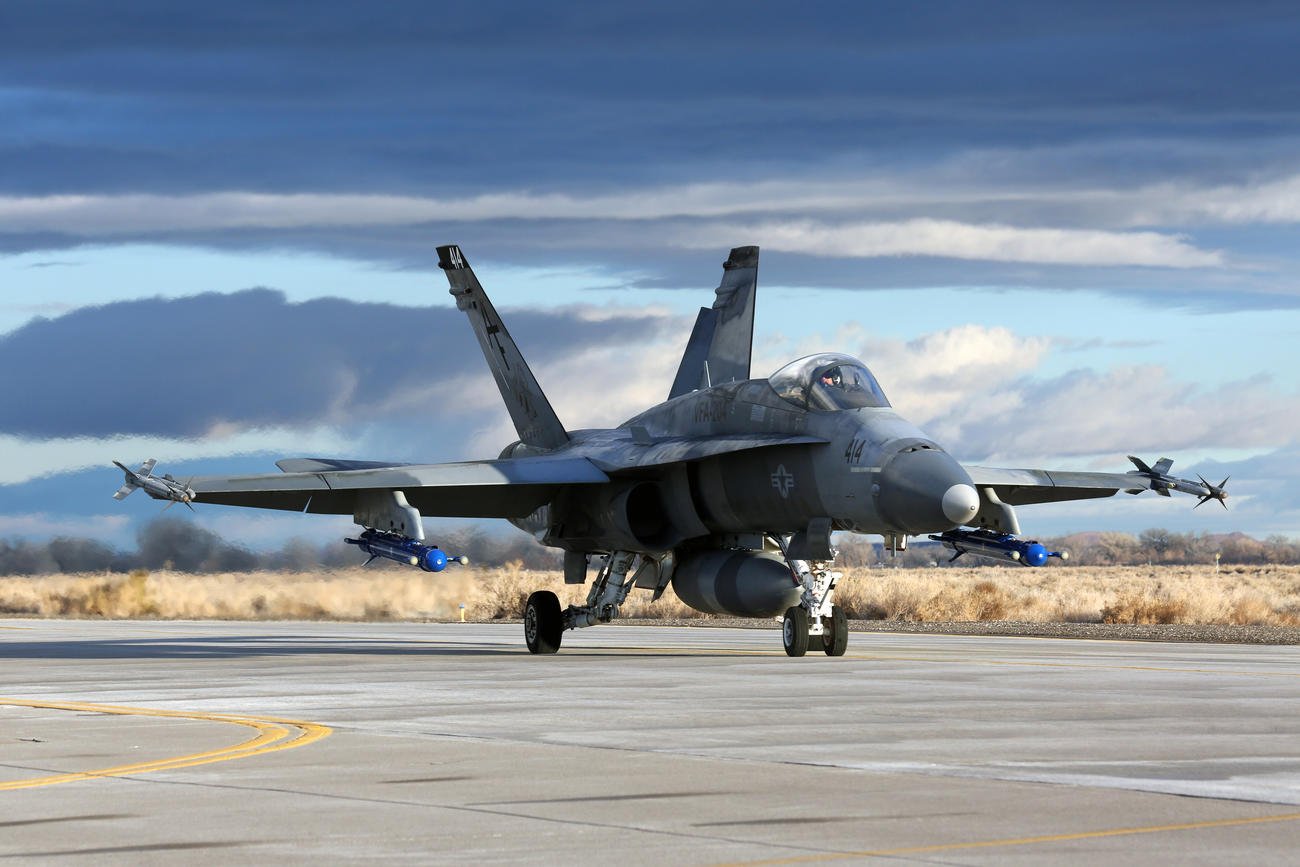 FALLON, Nev. — On any given day, the remote desert valleys of central Northern Nevada can feel like the most peaceful places on earth.

Until the noise from the jets arrives.

Sometimes the disruption is nothing more than a low rumble beyond a distant horizon that quickly fades back to silence.

Other times it turns into an ear-splitting roar that rattles windows and frightens cattle and wildlife.

To some native Paiute and Shoshone people in the region, the thunderous sound from Navy jets serves as a reminder of the damage caused by military expansion in their communities. They worry a proposed base expansion could broaden the damage.

“The military has not been kind to the Toi-ticutta,” said Donna Cossette of the Fallon Paiute Shoshone Tribe, using the Paiute word for “cattail eater,” the phrase for people who once lived around what is now the Stillwater National Wildlife Refuge about 80 miles (128 km) east of Reno.

The jet noise, explosions, restrictions on once-open landscape and environmental contamination are also, they fear, a mere glimpse of what’s to come if the Navy wins approval from Congress to expand the reach of the Fallon Naval Air Station.

The Fallon Paiute Shoshone, Walker River Paiute and Yomba Shoshone tribes have all objected to various aspects of the plan, fearing loss of land and damage to resources on the expanded bombing and training ranges.

They are joined by environmental groups, hunters and others who want to prevent the Navy from adding 937 square miles (2,426 square km) of public land beyond the size of the existing base which is about 360 square miles (93 square km) .

But the tribal members have been among the most dedicated and passionate leaders in the fight because, they say, they have the most to lose.

“Take a good look at my face because you will be seeing it again and again,” Cossette said during a Navy-led public meeting in January. “I will be the one you will be arresting from our sacred places because that is how important it is to me.”

Cossette is a direct descendant of Captain Truckee — the Paiute leader who in the mid-19th century guided explorers and settlers across the western Great Basin by way of the river that now bears his name.

She was also one of several people from area tribes who spoke publicly about how the military’s prior mistreatment of native people is directly related to their opposition to the expansion.

Cossette and other native people view the expansion proposal as another attempt by the military to bulldoze through native land while paying as little regard as possible to objections from native people.

Although each of the three tribes around the naval air station has its own objections, they share an overarching concern that the expansion proposal will cause even more irreparable harm to their land.

“The environment is at the core of all tribal nations’ existence,” said Stacey Montooth, executive director of the Nevada Indian Commission and a Walker River Paiute member. “The mountains, the sagebrush, all of Mother Nature’s animals, those are what make up our churches.”

The Navy has acknowledged tribes’ complaints about past environmental practices and has pledged to do better should the proposed expansion go forward.

“It is certainly true there are historical examples where our stewardship hasn’t been what it should have been,” said Alex Stone, the Navy’s project manager for the plan. “But we are committed to turning the page on that; I think this whole project has reflected that.”

The Fallon Naval Air Station is probably best known to the general public as the home of the Navy’s TOPGUN program — popularized by two Tom Cruise movies of the same name.

But its history in Nevada goes back to World War II. The area at the core of the modern base was part of the Western Defense Program, aimed at staving off a Japanese invasion that never happened.

After a brief period during which the site was under the control of the Bureau of Indian Affairs, it reverted to military use during the Korean War.

In the ensuing decades, jet and electronic warfare training expanded, and in the 1990s the site became home to the Naval Fighter Weapons School, or TOPGUN.

Now, with four bombing ranges and a ground training area for U.S. Navy SEALs, Fallon NAS is at a crossroads.

The Congressional legislation that authorizes the Navy to occupy most of the land is set to expire in 2021.

That means the base, which brings thousands of personnel to Fallon and supports the local economy, will need Congress to renew the land withdrawal.

But Navy officials say the existing spread is insufficient to train pilots with current weaponry.

The added distance means they need larger buffer zones between targets and the public at large, Navy officials say.

“The Department of Defense is required to own all that space between where that weapon is dropped to the target area,” said Rob Rule, community plans and liaison officer for Fallon NAS.

Without the added space, Navy pilots won’t have the chance to practice under realistic fighting conditions, officials said.

“There is a certain amount of urgency that this needs to occur,” Rule said.

That’s why they want to package the planned renewal with the expansion of the amount of land under military control.

About half of the expansion would occur in the Dixie Valley Training area about 40 miles (64 km) east of Fallon. But it would also expand the B-17 and B-20 bombing ranges. The expanded B-20 range would place it adjacent to the Stillwater National Wildlife Refuge and the expanded B-17 range would cover much of Gabbs Valley and require re-routing Highway 361.

Combining the renewal of the existing base with the expansion, which has run into widespread opposition, would allow both to become part of the upcoming National Defense Authorization Act.

Len George, the soft-spoken chairman of the Fallon Paiute Shoshone Tribe since 2002, wrote a column publicly criticizing the proposal.

George, a U.S. Army veteran who served overseas, accused the Navy of seeking to turn “sacred public lands into a bombing range.” He said the proposal would expand the Navy’s reach further into areas where native people have lived, died and worshiped for more than 10,000 years.

“Congress would never allow Arlington National Cemetery to be bombed for training exercises or ban the public from going there to pay their respects; our sites deserve the same protection,” he wrote.

How far Congress will go to accommodate the tribes remains uncertain.

During a Feb. 12 meeting of the House Committee on Armed Services, members showed varying levels of commitment to prioritizing tribal concerns.

Rep. Doug Lamborn, R-Colo., showed little interest in scaling back the proposal to consider the interests of native people or others who voiced objections.

But Rep. Deb Haaland, D-New Mexico, chastised officials for brushing off tribal concerns and suggested the process so far was an affront to native culture.

“They’ve lived on the land since time immemorial, their ancestors are buried there,” Haaland said. “The idea this land that is hallowed ground can be used for this type of training, it is really sacrilegious in a way.”

A staff member for Sen. Catherine Cortez Masto, D-Nev., said the senator is working on a public lands bill for the Fallon area that would address concerns from native people, businesses and conservationists.

“My team and I have met with stakeholders from the Fallon Paiute Shoshone Tribe and with the Walker River Paiute Tribe,” Rosen said. “I’m making sure that local tribes have a seat at the table so that their concerns are addressed.”

Logan Ramsey Tucker, a spokesperson for Rep. Mark Amodei, R-Nev., said it’s not yet clear what will happen next because Congress is now preoccupied with the COVID-19 pandemic and sudden global economic crash.

“There’s really not any updates to report at this time in Congress as the bill is not going to be following the original timeline we had expected it to due to interruptions caused by coronavirus,” Taylor said.

Native people acknowledge they face an uphill fight to convince Congress to rein in the military’s proposal.

But no matter what happens they’re planning to continue their efforts to regain what they’ve lost, said Rachel Downs, a Fallon Paiute Shoshone member and director of the tribe’s Cultural Learning Center.

This article was written by BEN SPILLMAN from The Associated Press and was legally licensed through the NewsCred publisher network. Please direct all licensing questions to legal@newscred.com.

The House on Thursday passed by voice vote an annually required measure to increase cost-of-living adjustments tied to veterans benefits in parity with the COLA approved by the Social Security Administration. Senate passage and the […]

The Pentagon’s Inspector General will conduct an evaluation of the Navy’s command decisions in its response to the novel coronavirus pandemic, including outbreaks aboard the aircraft carrier Theodore Roosevelt and destroyer Kidd that forced both […]