Police were currently responding to an active shooting scene at the YouTube HQ in San Bruno, CA.

Active shooter at YouTube HQ. Heard shots and saw people running while at my desk. Now barricaded inside a room with coworkers.

And while initial reports suggested the shooter was a white woman wearing a “dark top and a headscarf,” the suspect has not yet been identified and authorities are unsure if there are multiple shooters.


But some people aren’t waiting for all the facts to come out. Actor and director Michael Ian Black got right to work tweeting about gun control and the NRA.

“Another shooting,” the actor tweeted. “I’m going to politicize the fuck out of it, and so should you. The NRA is a terrorist organization.”

After backlash mounted against the actor for tweeting before letting the facts surface, Black dug in.

As more people get involved in the national conversation relating to gun control, some high profile celebrities have come unglued and target their anger at law abiding organizations like the NRA.

And it only got worse from there….

You know what will stop you from coming for my guns? My guns. https://t.co/pPoKUaQXLO

And even more liberal lunacy…will someone please give this guy a hat to eat. 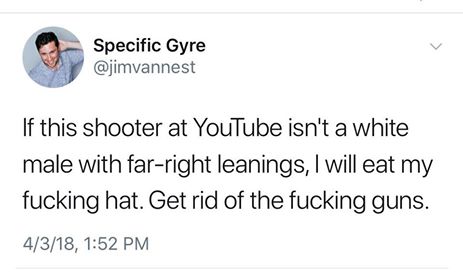 Parents up in arms after NYPD removes cops from schools

The last NYPD cops assigned full-time to New York City public schools are being moved out — despite nationwide calls for heightened security in the wake of last month’s Florida shootings. As the nation mourned […]

MONTPELIER, Vt. (WCAX) The Vermont Senate has approved a bill that would allow police to take firearms and explosives from people judged to be an extreme risk to themselves or others. The Fair Haven case […]