Law enforcement is pushing back hard on Democratic charges that President Trump’s criticism of top FBI and Justice officials is a demoralizing attack on the rank and file, with one top cop saying there is “no doubt” that Trump has been better for police than former President Obama.

.@realDonaldTrump: "I have always had a great relationship with the sheriffs. My administration stands proudly with America's sheriffs, deputies and law enforcement officers. And we stand also 100 percent with strong law and order." https://t.co/QLanl42Zif

Eavenson, overseeing the group’s legislative meeting in Washington this week, said he has heard support for Trump from the streets to the management of the FBI and U.S. Customs and Border Protection agency.

“I have talked with some of those guys at the supervisor level down to the agent level and they are absolutely enthralled with President Trump. They like him because they can do their the job the way it is supposed to be done,” he said in an interview. Trump’s foes have suggested that his criticism of the politicization inside the FBI and Justice, displayed fully in newly-released reports and texts quoting officials pleading for Hillary Rodham Clinton to win the 2016 election, has sunk morale in law enforcement.

Thank you Mr. President for supporting not only the men and women of law enforcement in Las Vegas, but around the country as well! https://t.co/D0NrgRpWMl

California Democratic Rep. Adam Schiff, for example, said Wednesday, “I am concerned about the attack on these institutions and the long term damage that is being done.”

But that ignores the strong ties Trump has with law enforcement dating back to the 2016 presidential campaign, when he made time to thank motorcade cops, to calls he’s made like one to an Indianapolis motorcycle policeman injured in a presidential motorcade, to this week when he hosted sheriffs at the White House.

Jonathan F. Thompson, executive director of the Sheriffs’ Association, said, “It has raised morale to see that the president and the attorney general of the United States, as they say, has their back. It does trickle down to the rank and file in local law enforcement because they know that if they are on a case or they are working a task force that they have their support.”

Where Obama often took the side of those claiming police brutality, Trump has backed the police politically and symbolically — and often out of the public eye. 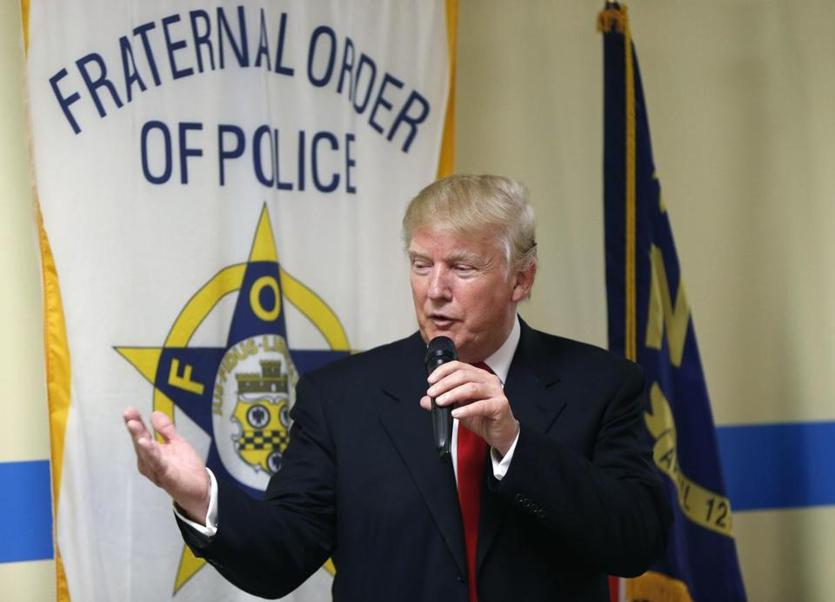 Donald Trump speaks at a Fraternal Order of Police lodge during a campaign stop in Statesville, North Carolina. AP Photo

“You can see that bond with law enforcement and how much he enjoys engaging with law enforcement,” said Miller, adding, “I see it so often behind closed doors where he wants to ask them about their shifts, about their responsibilities, about what they’ve seen and where they’ve been and who they’ve interacted with. And he loves to ask them, as well, as a rank and file person, what is your thought on how we should address a policy issue affecting your department or your line of work. He really wants to hear from the rank and file about whatever legislative or policy issues we’re dealing with that impact that person’s life or career based upon their insight as someone intimately involved with it on a day to day basis.”

Criticizing 5 lawyer bureaucrats at the top of the FBI is not attacking the boots on the ground. When you support law enforcement as we do you would get it. I know many LEOs, they all get it and feel the same way and express it often. We support the doers… Boots Not Suits! https://t.co/T3ON3NFJcQ

President Trump’s son Donald Trump Jr. tweeted this week that his extensive relationships in law enforcement concur and he took exception to those suggesting that the president’s criticism of FBI brass is also an attack on the rank and file.

“Criticizing 5 lawyer bureaucrats at the top of the FBI is not attacking the boots on the ground,” tweeted Trump. “When you support law enforcement as we do you would get it. I know many LEOs, they all get it and feel the same way and express it often. We support the doers…Boots Not Suits,” he added.

That has been the message inside several federal agencies such as Immigration and Customs Enforcement where the former administration limited their law enforcement abilities.

In an interview last year, for example, ICE chief Thomas Homan told Secrets that Border Patrol and ICE agents are cheering life under Trump. “Now they have meaning to their jobs,” said Homan. “What this president has done is taken the handcuffs off of law enforcement officers who are charged with enforcing immigration laws,” he added.

On Tuesday, the National Sheriffs’ Association agreed and said that law enforcement is respected again at the top level of government.

“It’s nice to be able to go in and sit down with the most powerful man in the world and tell him what your problems are and he’s interested in them. That’s a good feeling,” said Eavenson, who added that White House treatment of police agencies is “no doubt, no doubt” better under Trump than Obama.