On this day December 13th in 1577, English seaman Francis Drake sets out from Plymouth, England, with five ships and 164 men on a mission to raid Spanish holdings on the Pacific coast of the New World and explore the Pacific Ocean. Three years later, Drake’s return to Plymouth marked the first circumnavigation of the earth by a British explorer.

After crossing the Atlantic, Drake abandoned two of his ships in South America and then sailed into the Straits of Magellan with the remaining three. A series of devastating storms besieged his expedition in the treacherous straits, wrecking one ship and forcing another to return to England. Only The Golden Hind reached the Pacific Ocean, but Drake continued undaunted up the western coast of South America, raiding Spanish settlements and capturing a rich Spanish treasure ship.

Drake then continued up the western coast of North America, searching for a possible northeast passage back to the Atlantic. Reaching as far north as present-day Washington before turning back, Drake paused near San Francisco Bay in June 1579 to repair his ship and prepare for a journey across the Pacific. Calling the land “Nova Albion,” Drake claimed the territory for Queen Elizabeth I.

In July, the expedition set off across the Pacific, visiting several islands before rounding Africa’s Cape of Good Hope and returning to the Atlantic Ocean. On September 26, 1580, The Golden Hind returned to Plymouth, England, bearing treasure, spice, and valuable information about the world’s great oceans. Drake was the first captain to sail his own ship all the way around the world–the Portuguese explorer Ferdinand Magellan had sailed three-fourths of the way around the globe earlier in the century but had been killed in the Philippines, leaving the Basque navigator Juan Sebastián de Elcano to complete the journey.

In 1581, Queen Elizabeth I knighted Drake, the son of a tenant farmer, during a visit to his ship. The most renowned of the Elizabethan seamen, Sir Francis Drake later played a crucial role in the defeat of the Spanish Armada. 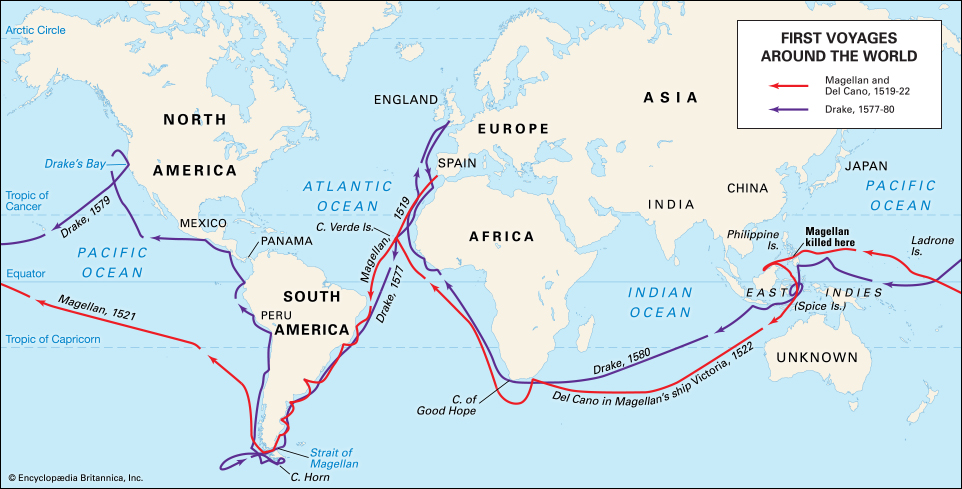