From deadly laser beams to plasma forcefields, here are 9 military weapons that tell us the future is now. 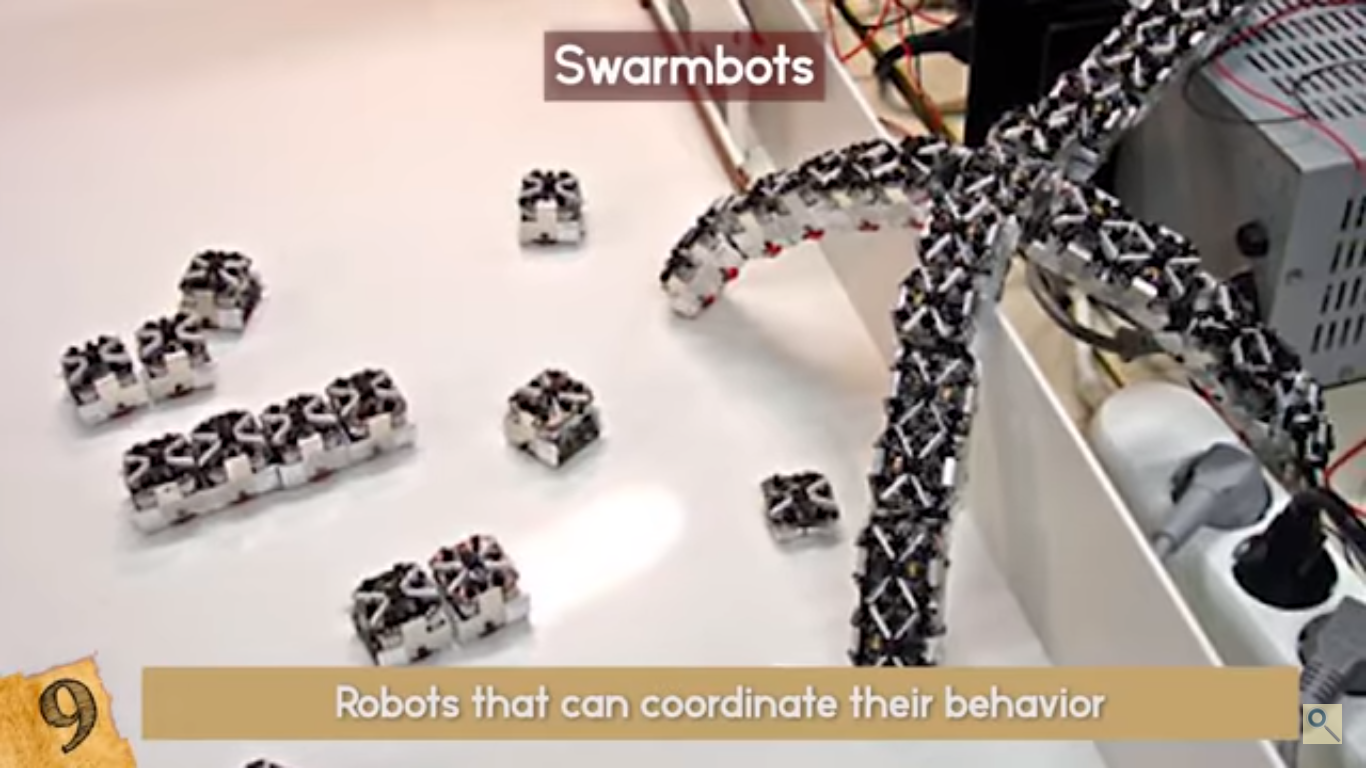 9. SwarmBots – Right out of a sci-fi movie swarmbots are robots that can coordinate their behavior and act together in the group like a beehive. Whether in the air or under the sea scientists are trying to harness the power of the insect world to apply it to everything from Healthcare to disaster rescue to mining operations, and of course military applications.

It is no secret the US military has been conducting research on this idea for a while. Swarmbots are relatively inexpensive and can soon play a central role in military strategy. The ONR, the Office of Naval Research staged a demonstration of their control architecture for robotic agents and command systems in 2014 which involved  13 boats operating without any human control, performing complicated Maneuvers in perfect unison. Smart robots and drones that don’t require close supervision could also act as a force multiplier consisting of relatively cheap and disposable forces that could engage more enemy targets that could be more difficult for enemies to try to destroy.

A swarm of networked machines sent into an area to monitor and even fight in hostile places without the risk of human life. And even if an enemy managed to knock one of the devices out, the network would be able to compensate and continue to function. 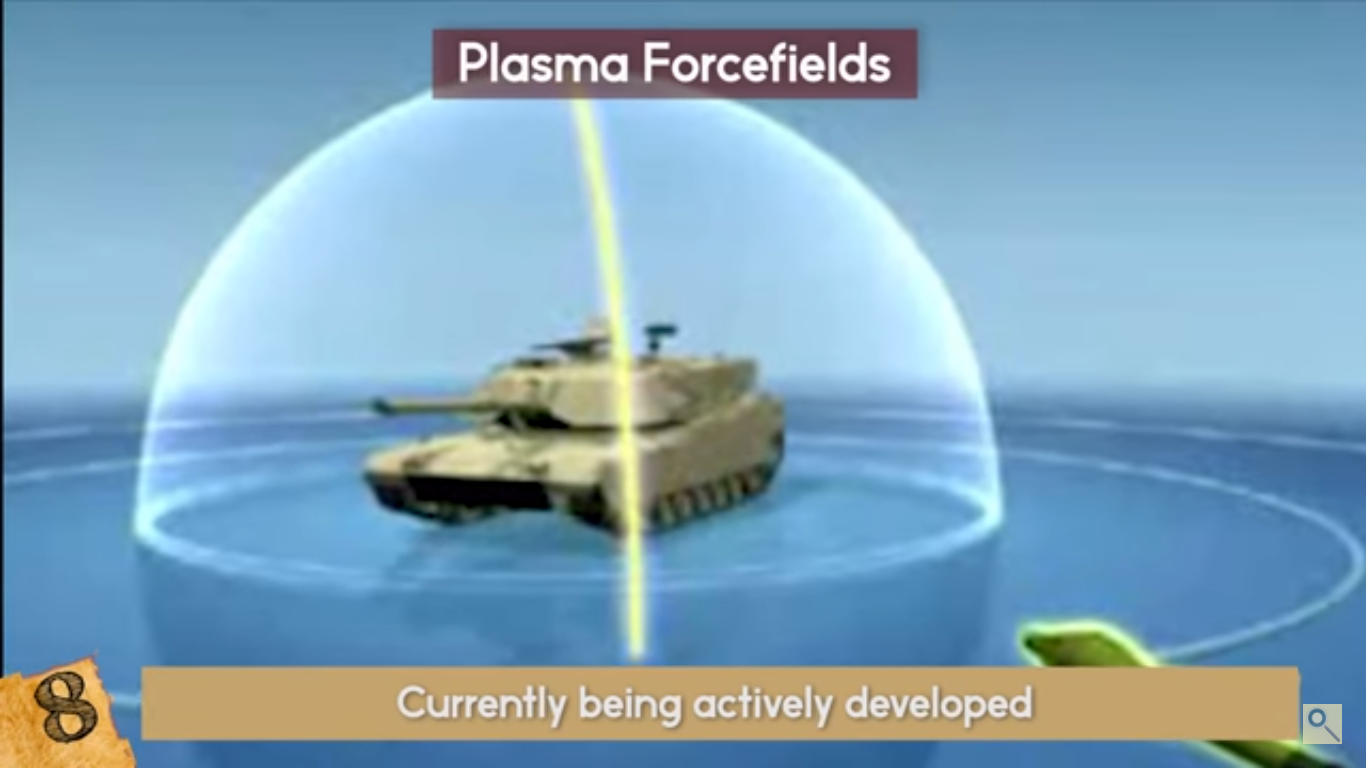 8. Plasma Force Fields – Sounding like something you’d more likely expect to see on Star Trek, plasma force fields are in fact currently being developed and could soon be deployed to defend high priority assets. Last year Boeing was granted a patent to develop this technology to protect vehicles from the shock waves that occur as a result of explosions from missiles or improvised devices.

The way it works is by heating up the air around the vehicle to very high temperatures which could absorb the incoming  energy from an explosive blast. This is done by feeding the area with superheated plasma and controlling the plasma flow by using a magnetic field.

The plasma starts to become viscous, forming a dense shield  making it difficult for matter to pass through. If it isn’t deflected, then it will be significantly slowed down. Boeing’s plans would mount a device on whatever you were trying to protect, which by using a complex set of sensors would be able to determine the size and speed of the incoming danger, calculate the direction from which the incoming threat would arrive at, and project a field to protect against it.

The important thing about the way this works is it doesn’t require the field to be be ready at all times. It is only created in small areas to protect from specific threats and so the system is very efficient and longer-lasting than others. 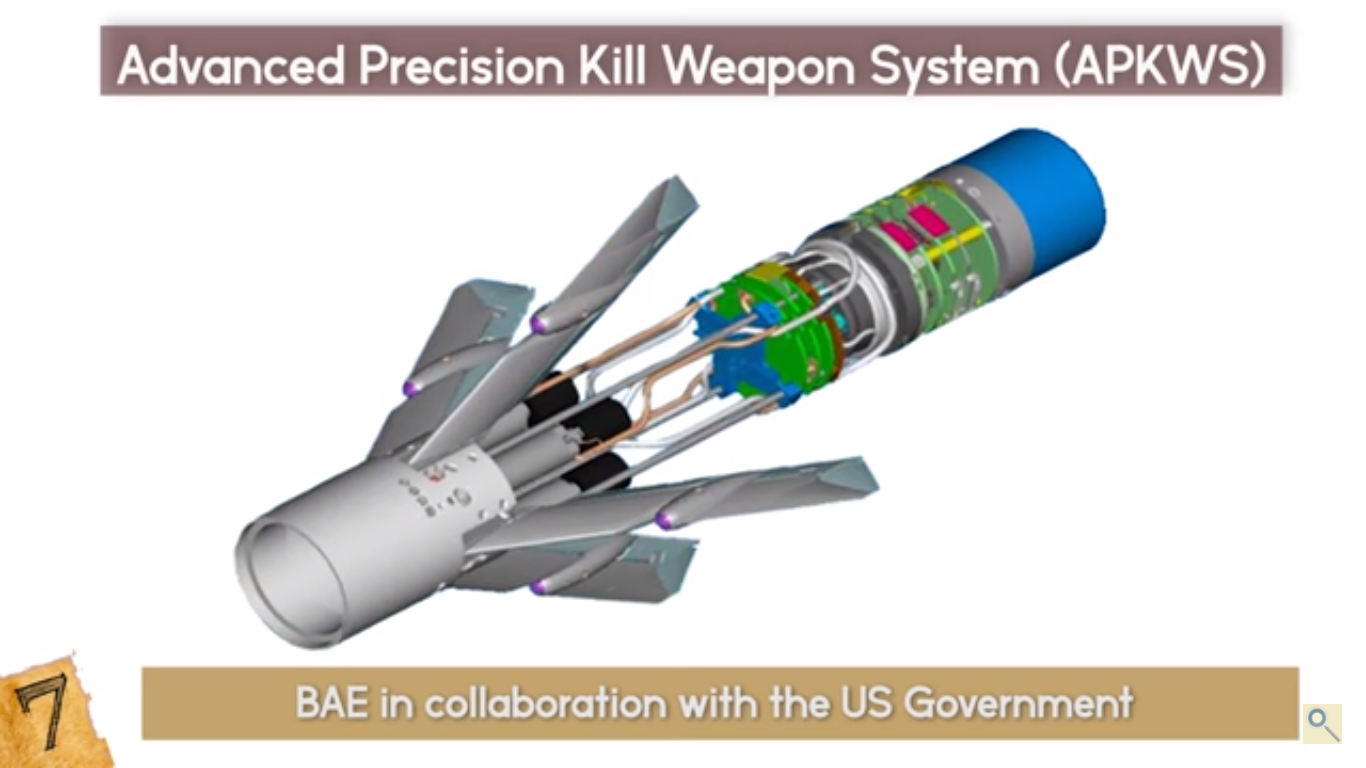 7. Advanced Precision Kill Weapon Systems. (APKWS). BAE in collaboration with the US government has successfully launched the apkws, a high-precision rocket system with a semi-active laser-guided mechanism. The weapon system is currently deployed by the US military forces and consists of a point and shoot with no external maintenance required.

It has wings and folding fins mounted with laser seeking Optics. It also has a Plug and Play device that can be fitted into any existing weapon system turning it into a precision guided weapon. Is already used by the US Marine Corps in Iraq and Afghanistan. It is supposed to prevents the death of civilians while destroying the intended target. 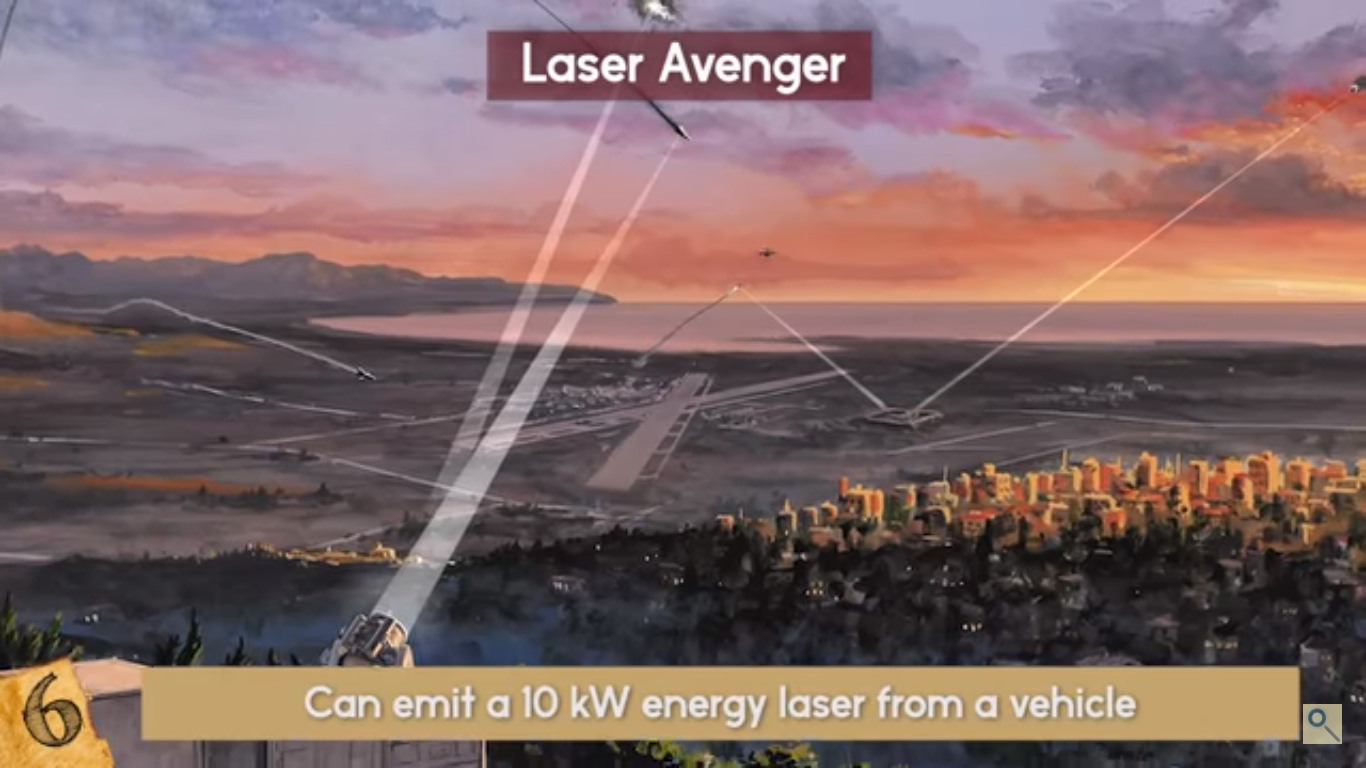 6. Laser Avenger. The US Army and Boeing have United to create a brand new directed-energy weapon that emits a highly focused beam of energy. The laser cannon that goes by the name of high energy laser mobile demonstrator or Hel MD, can emit a 10-kilowatt energy laser from a vehicle to take out missiles and  mortar shells. Boeing is also developing a stronger version that could fire up to 60 kilowatts shots that could dismantle high range missiles and UAV’s like drones.

The cool thing is it can be operated by an Xbox controller. While one person drives the truck the other person sits with the laptop and the Xbox controller and locks on targets to destroy them. 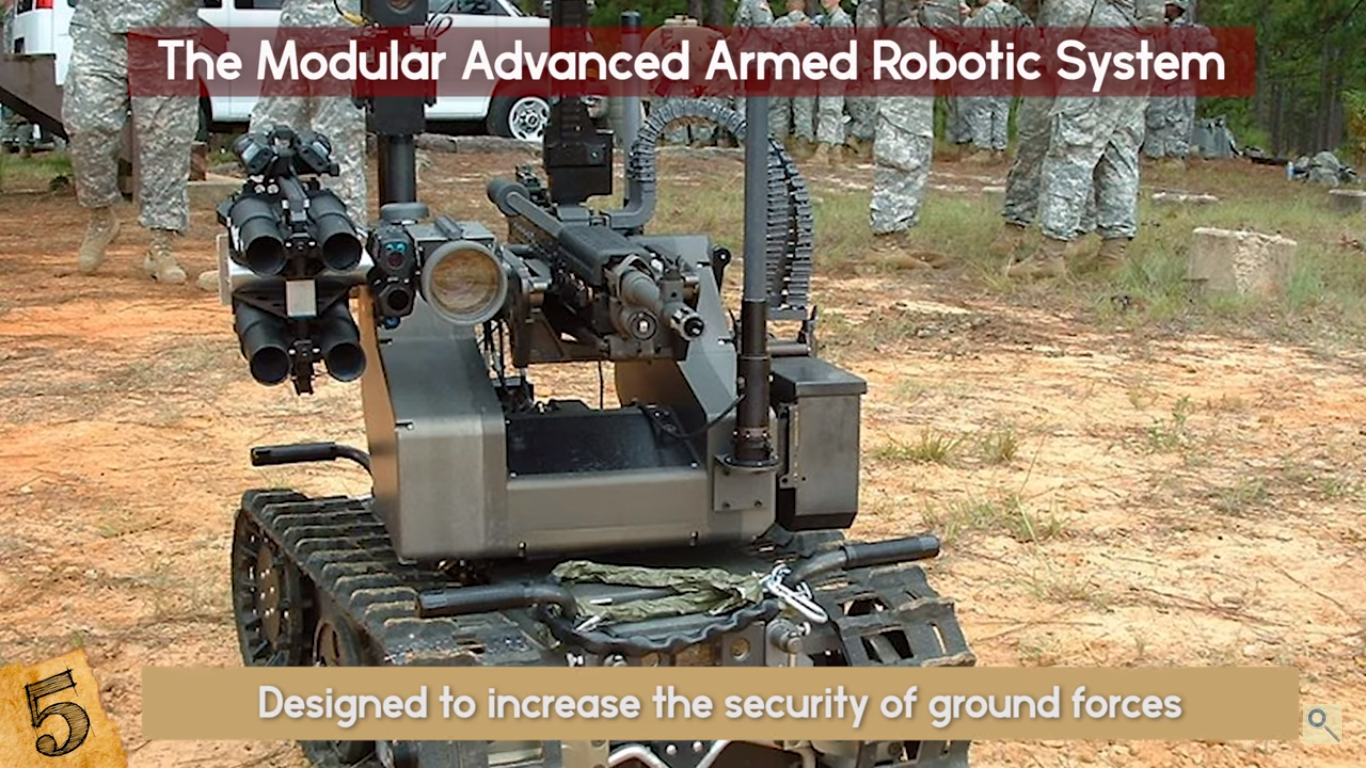 5 The Modular Advanced Armed Robotic System. The Marines are testing a robot armed with a machine gun. The modular Advanced arms robotic system or Mars for short is an unmanned ground vehicle designed to increase the security of ground forces. These robots would be able to stand in for soldiers during risky missions. Mars is a mini robotic tank developed by a company called kinetic and can be equipped with a machine gun or a grenade launcher.

It has a top speed of about 7 miles an hour for troops to be able to walk next to it. You can control it like a like a drone, using a tactical robotic controller from up to 1 km away. It is also strong enough to drag a wounded soldier off of the battlefield while firing. It’s big brother the RMVCar can carry an m134, firing  from 2000 to 3000 rounds per minute. The MARS offers capabilities in a range from lethal to non-lethal. It can produce sirens and disorienting lasers and has a grenade launcher that can be equipped with various ammunition, like teargas, Buckshot, smoke, High explosives, airburst, or be replaced with an M240b medium machine gun with 450 7.62 ball rounds.

Marine Corps War Fighting Laboratory hopes to have an unarmed vehicle like Mars for infantry squads by 2018. 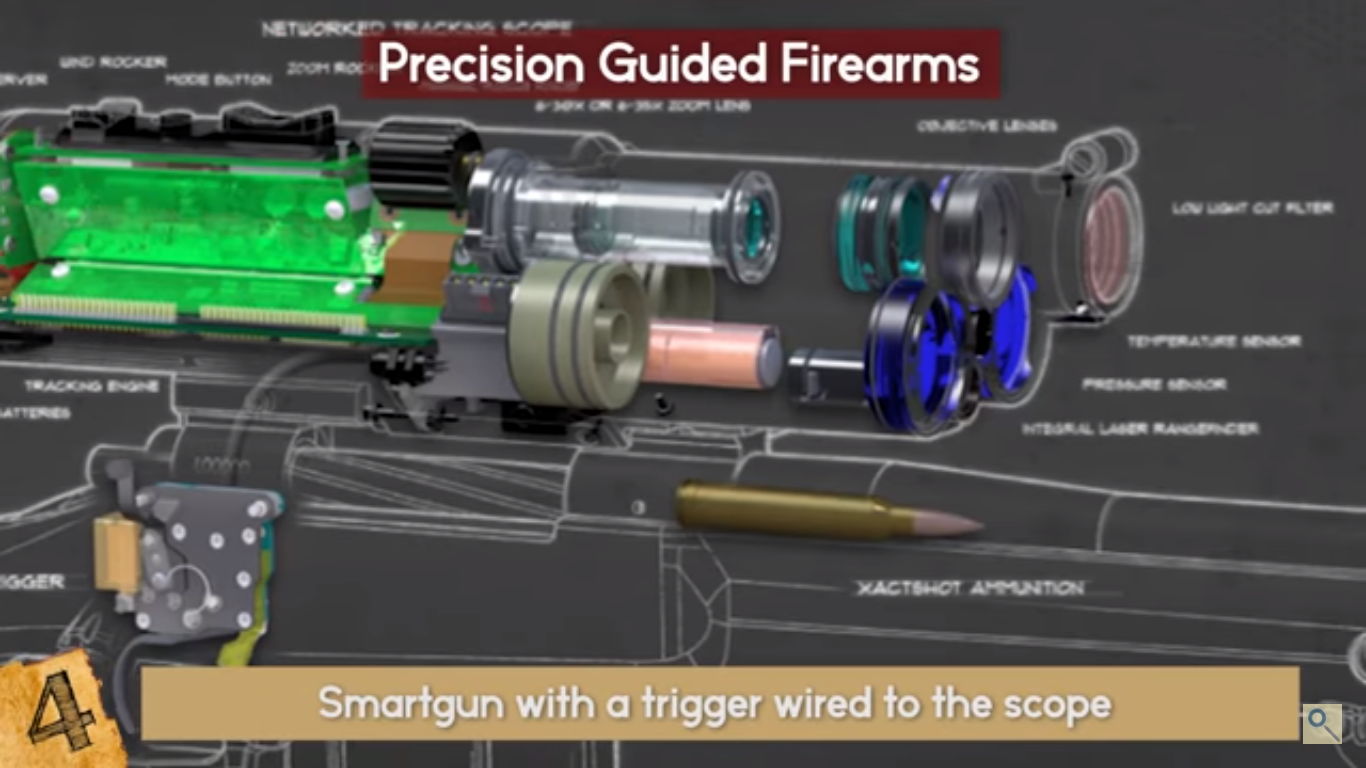 4. Precision Guided Firearms. TrackingPoint is an American Technology firearms company that created the first PGF. Like a video game, these rifles are capable of nailing targets more than a thousand yards away. Tracking Point describes the weapon as a smart gun with a trigger wired to the scope so it won’t fire until it’s locked on the target. They have WiFi and a color display so users can post their shots on the internet.

The technology is quite controversial since just about everybody can be a sniper and shoot targets from around 1000 yards away. The tracking Point scope allows the shooter to tag a Target by placing a red dot on it within the crosshairs. Tracking point charges from $22,500 to $27,500 for the different versions of its bolt-action rifles, which has a 5 round magazine using 300 or 338 caliber ammunition. Cheaper models and now around $5,000.

CEO Jason Chavo, a former Marine Captain wounded in Iraq, was hoping to get a contract with the US military, saying that US soldiers could benefit from the long range accuracy and Wifi Communications features. 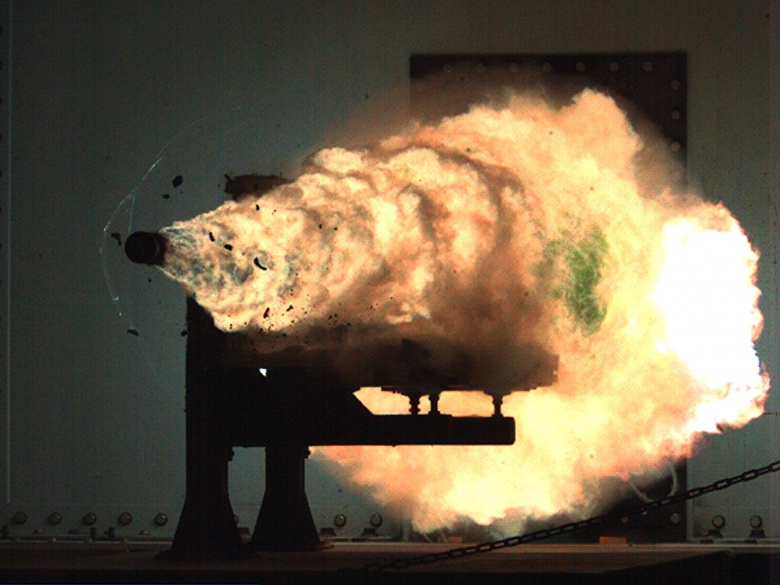 3. Rail Guns. What if we had a gun that didn’t require gun powder or explosives? Behold the railgun . A weapon technology that has been under development by BAE systems on behalf of the u.s. Navy for the last decade, at a cost of over 500 million dollars. A Rail Gun uses electromagnetic force to fire instead of a propellants and can fire a projectile at 4,400 miles per hour more than a mile a second. After building up an energy store of around 32 megajoules. the capacitors channel energy long to separate rails one of which has a positive charge and the other negative charge, which generates a powerful electromagnetic force which powers are projectile along the rails. The 25 pound projectile being used is non-explosive and  consists of tungsten pellets inside an aluminum casing.

Along with these benefits are the eliminating need for explosive fuels which makes weapons preparation and maintenance much safer for his operators. Even though it’s much safer they require a power plant that generates 25 megawatts, enough electricity to power 18,750 homes. The military is looking into his potential as a cheaper missile defense system maybe within the next 10 years.

They would be able to take out any threat from airplanes, missiles, tanks you name it. The main problem is they have a tendency to tear themselves apart when firing because of the extreme temperatures and pressures generated. They are also limited by the amount of power they need to operate, but rapid advancements in power generation techniques and strong allied competition means that insiders feel that it won’t be too long before these monsters weapons are installed on battleships. 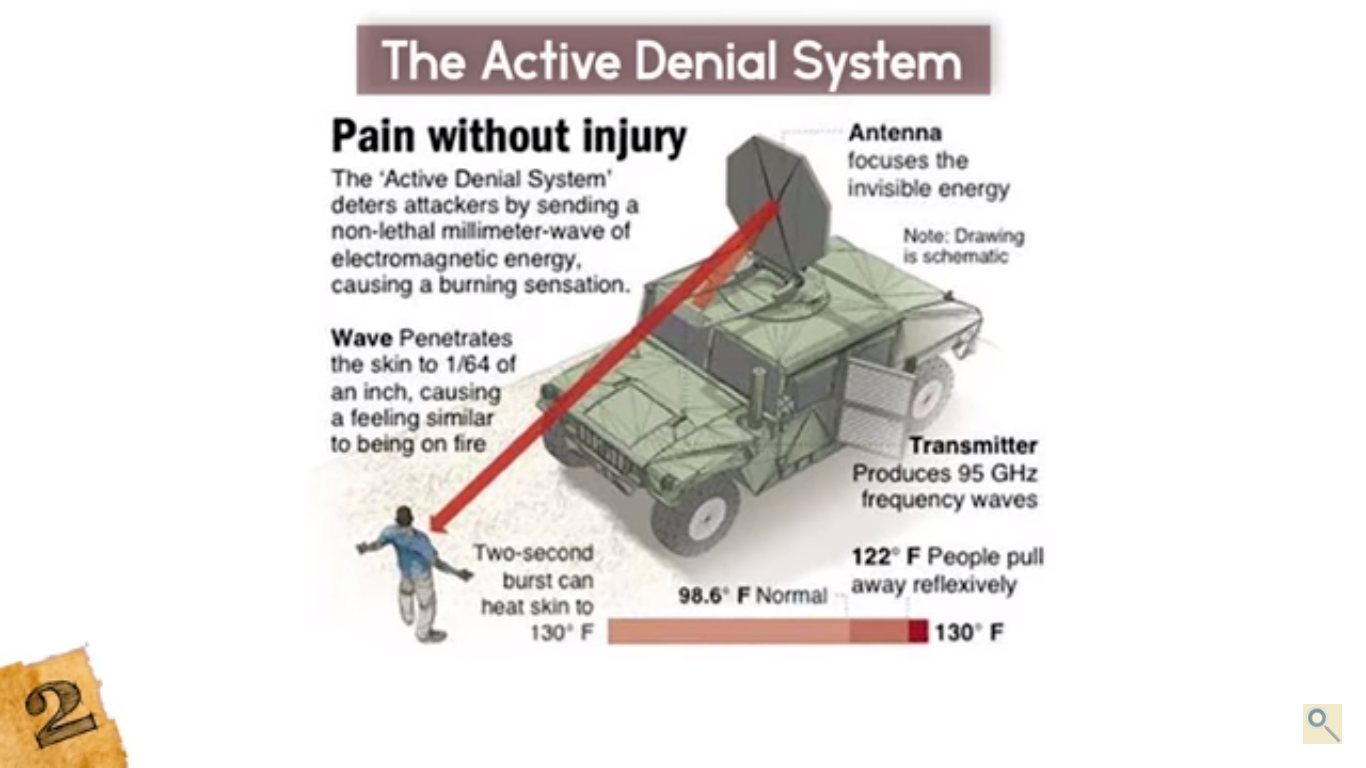 2. The Active Denial System. Also known as the heat ray, the active denial system is a non-lethal Energy System that fires a beam of radiation. Designed by the US military as a counter personnel measure to be used in crowd control and security scenarios, it makes people feel like their skin is burning without causing permanent damage.

Unlike tactics that use kinetic energy such as rubber bullets, bean bags or water cannons which can cause severe injury,  the ADS works by firing a high-powered beam of 95 gigahertz  waves at is target. The beam functions in a similar way to a microwave, and excites the water molecules of the target (aka the person), causing an instant heating effect. The frequency of the beam only  penetrates the top layer of the human skin so even though I can cause blisters in rare cases, the target would only feel an uncomfortable amount of heat and back off.

The military have tested this weapon on over 13,000 volunteers, so they are confident that the side effects of this weapon are minimal and it is safe to use as a crowd control device. The current versions of the ADS are large, but continual development is looking for ways to reduce the size and power consumption of the unit to make it more portable. The system has been deployed in War situations already with NATO confirming it was present in Afghanistan in 2010 but it was never used against enemy forces.

Smaller versions developed by a company called Pantheon are available, for you spy police and prisoner authorities across the United States, with LA County Jail having installed one on their ceiling. 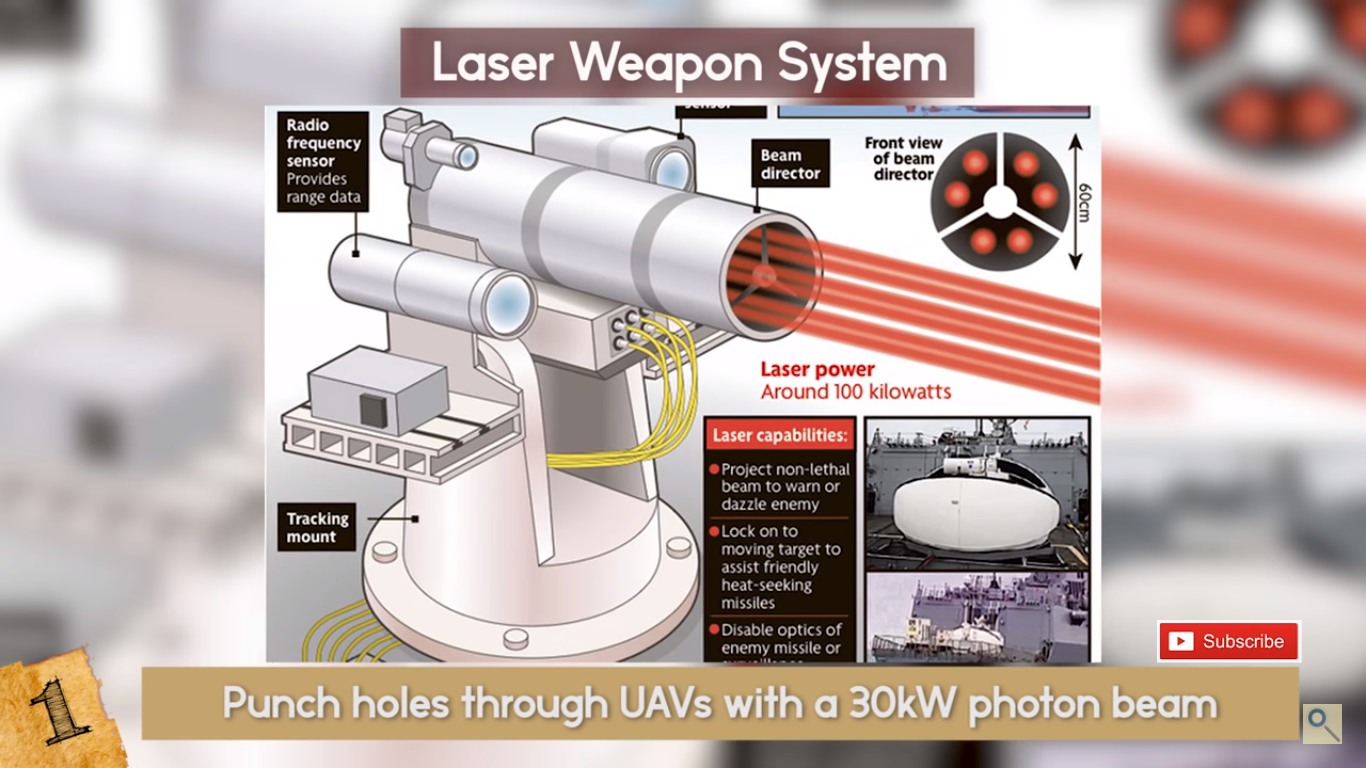 1 Laser Weapon System–  Spurred on by the rapid increase in the number of drones both from military and domestic use, the laser weapon system or LAWS is a directed energy weapon that was developed by the US Navy. It is 40 million dollar prototype system ,able to punch holes through UAVS with a 30 kilowatt Photon beam.

Designed as a defensive solution, LAWS emits an infrared beam from a solid state laser array that targets threats with the intention of either destroying or disabling it systems. Power outputs of the systems can be adjusted with a maximum output of 30,000 Watts. It can be fired very quickly being able to disable a drone in a matter of seconds. It can engage automatically without the need for human operation.

The Navy installed the first prototype of this  laser system on the amphibious uss ponce in 2014 at has reportedly incapacitated unmanned aerial drones as well as simulated small boat attackers. It’s also a very cost efficient compared to other Weaponry 1 laser shot cost just about a dollar. With a number of drones that are out there in the hands of whoever can afford them, this type of defense that the laws office will be invaluable in the future to protect military assets airports and every other high-profile Target.