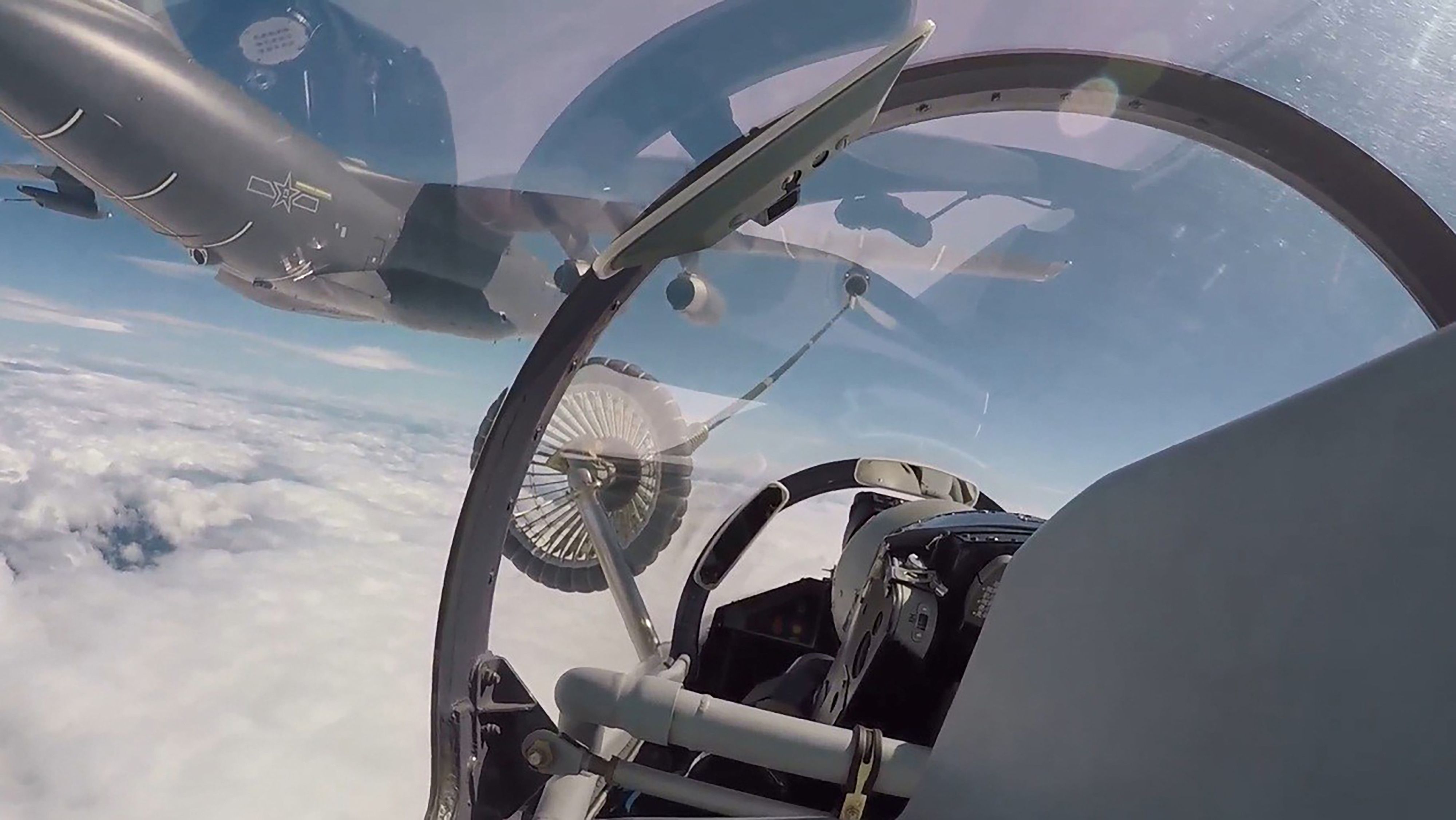 BEIJING (AP) — China on Friday said it is canceling or suspending dialogue with the United States on a range of issues from climate change to military relations and anti-drug efforts in retaliation for a visit this week to Taiwan by U.S. House Speaker Nancy Pelosi.

The measures, which come amid cratering relations between Beijing and Washington, are the latest in a promised series of steps intended to punish the U.S. for allowing the visit to the island it claims as its own territory, to be annexed by force if necessary. China on Thursday launched threatening military exercises in six zones just off Taiwan’s coasts that it says will run through Sunday.

Missiles have also been fired over Taiwan, defense officials told state media. China routinely opposes the self-governing island having its own contacts with foreign governments, but its response to the Pelosi visit has been unusually vociferous.

The Foreign Ministry said dialogue between U.S. and Chinese regional commanders and defense department heads would be canceled, along with talks on military maritime safety.

The actions were taken because Pelosi visited Taiwan “in disregard of China’s strong opposition and serious representations,” the ministry said in a statement.

China has accused the Biden administration of an attack on Chinese sovereignty, although Pelosi is head of the legislative branch of government and Biden had no authority to prevent her visit.

China’s actions come ahead of a key congress of the ruling Communist Party later this year at which President Xi Jinping is expected to obtain a third five-year term as party leader. With the economy stumbling, the party has stoked nationalism and issued near-daily attacks on the government of Taiwanese President Tsai Ing-wen, which refuses to recognize Taiwan as part of China, in order to solidify its support among the public.

China said Friday that more than 100 warplanes and 10 warships have taken part in the live-fire military drills surrounding Taiwan over the past two days, while announcing mainly symbolic sanctions against U.S. House Speaker Nancy Pelosi and her family over her visit to Taiwan earlier this week.

The official Xinhua News Agency said Friday that fighters, bombers, destroyers and frigates were all used in what it called “joint blockage operations.”

The Rocket Force also fired projectiles over Taiwan into the Pacific, military officers told state media, in a major ratcheting up of China’s threats to attack and invade the island.

The drills, which Xinhua described as being held on an “unprecedented scale,” are China’s most strident response to Pelosi’s visit. The speaker is the highest-ranking U.S. politician to visit Taiwan in 25 years.

Dialogue and exchanges between China and the U.S., particularly on military matters and economic exchanges, have generally been halting at best. Climate change and fighting trade in illegal drugs such as fentanyl were, however, areas where they had found common cause, and Beijing’s suspension of cooperation could have significant implications for efforts to achieve progress in those issues.

China and the United States are the world’s No. 1 and No. 2 climate polluters, together producing nearly 40% of all fossil-fuel emissions. Their top climate diplomats, John Kerry and Xie Zhenhua, maintained a cordial relationship that dated back to the Paris climate accord, which was made possible by a breakthrough negotiated among the two and others.

China under Kerry’s prodding committed at last year’s U.N. global climate summit in Glasgow to working with the U.S. “with urgency” to cut climate-wrecking emissions, but Kerry was unable to persuade it to significantly speed up China’s move away from coal.

On the Chinese coast across from Taiwan, tourists gathered Friday to try to catch a glimpse of any military aircraft heading toward the exercise area.

Fighter jets could be heard flying overhead and tourists taking photos chanted, “Let’s take Taiwan back,” looking out into the blue waters of the Taiwan Strait from Pingtan island, a popular scenic spot in Fujian province.

Pelosi’s visit stirred emotions among the Chinese public, and the government’s response “makes us feel our motherland is very powerful and gives us confidence that the return of Taiwan is the irresistible trend,” said Wang Lu, a tourist from neighboring Zhejiang province.

China is a “powerful country and it will not allow anyone to offend its own territory,” said Liu Bolin, a high school student visiting the island.

“We are compatriots and we hope to live in peace,” Zheng said. “We should live peacefully with each other.”

China’s insistence that Taiwan is its territory and its threat to use force to bring it under its control have featured highly in ruling Communist Party propaganda, the education system and the entirely state-controlled media for more than seven decades since the sides were divided amid civil war in 1949.

Taiwan residents overwhelmingly favor maintaining the status quo of de facto independence and reject China’s demands that the island unify with the mainland under Communist control.

On Friday morning, China sent military ships and war planes across the mid-line of the Taiwan Strait, the Taiwanese Defense Ministry said, crossing what had for decades been an unofficial buffer zone between China and Taiwan.

Five of the missiles fired by China since the military exercises began Thursday landed in Japan’s Exclusive Economic Zone off Hateruma, an island far south of Japan’s main islands, Japanese Defense Minister Nobuo Kishi said. He said Japan protested the missile landings to China as “serious threats to Japan’s national security and the safety of the Japanese people.”

Chinese Foreign Ministry spokesperson Hua Chunying said China’s actions were in line with “international law and international practices,” though she provided no evidence.

“As for the Exclusive Economic Zone, China and Japan have not carried out maritime delimitation in relevant waters, so there is no such thing as an EEZ of Japan,” Hua told reporters at a daily briefing.

In Tokyo, where Pelosi is winding up her Asia trip, she said China cannot stop U.S. officials from visiting Taiwan. Kishida, speaking after breakfast with Pelosi and her congressional delegation, said the missile launches need to be “stopped immediately.”

China said it summoned European diplomats in the country to protest statements issued by the Group of Seven industrialized nations and the European Union criticizing the Chinese military exercises surrounding Taiwan.

Its Foreign Ministry on Friday said Vice Minister Deng Li made “solemn representations” over what he called “wanton interference in China’s internal affairs.”

Deng said China would “prevent the country from splitting with the strongest determination, using all means and at any cost.”

The ministry said the meeting was held Thursday night but gave no information on which countries participated. Earlier Thursday, China canceled a foreign ministers’ meeting with Japan to protest the G-7 statement that there was no justification for the exercises.

Both ministers were attending a meeting of the Association of Southeast Asian Nations in Cambodia.

China has promoted the overseas support it has received for its response to Pelosi’s visit, mainly from fellow authoritarian states such as Russia, Syria and North Korea.

China had earlier summoned U.S. Ambassador Nicholas Burns to protest Pelosi’s visit. The speaker left Taiwan on Wednesday after meeting Tsai and holding other public events. She traveled on to South Korea and then Japan. Both countries host U.S. military bases and could be drawn into a conflict involving Taiwan.

They are believed to be the largest held near Taiwan in geographical terms and the closest in proximity — within 20 kilometers (12 miles) of the island.

U.S. Secretary of State Antony Blinken on Friday called the drills a “significant escalation” and said he has urged Beijing to back down.

U.S. law requires the government to treat threats to Taiwan, including blockades, as matters of “grave concern.”

The drills are an echo of the last major Chinese military drills aimed at intimidating Taiwan’s leaders and voters in 1995 and 1996.

Taiwan has put its military on alert and staged civil defense drills, but the overall mood remained calm on Friday. Flights have been canceled or diverted and fishermen have remained in port to avoid the Chinese drills.

In the northern port of Keelung, Lu Chuan-hsiong, 63, was enjoying his morning swim Thursday, saying he wasn’t worried.

“Everyone should want money, not bullets,” Lu said.