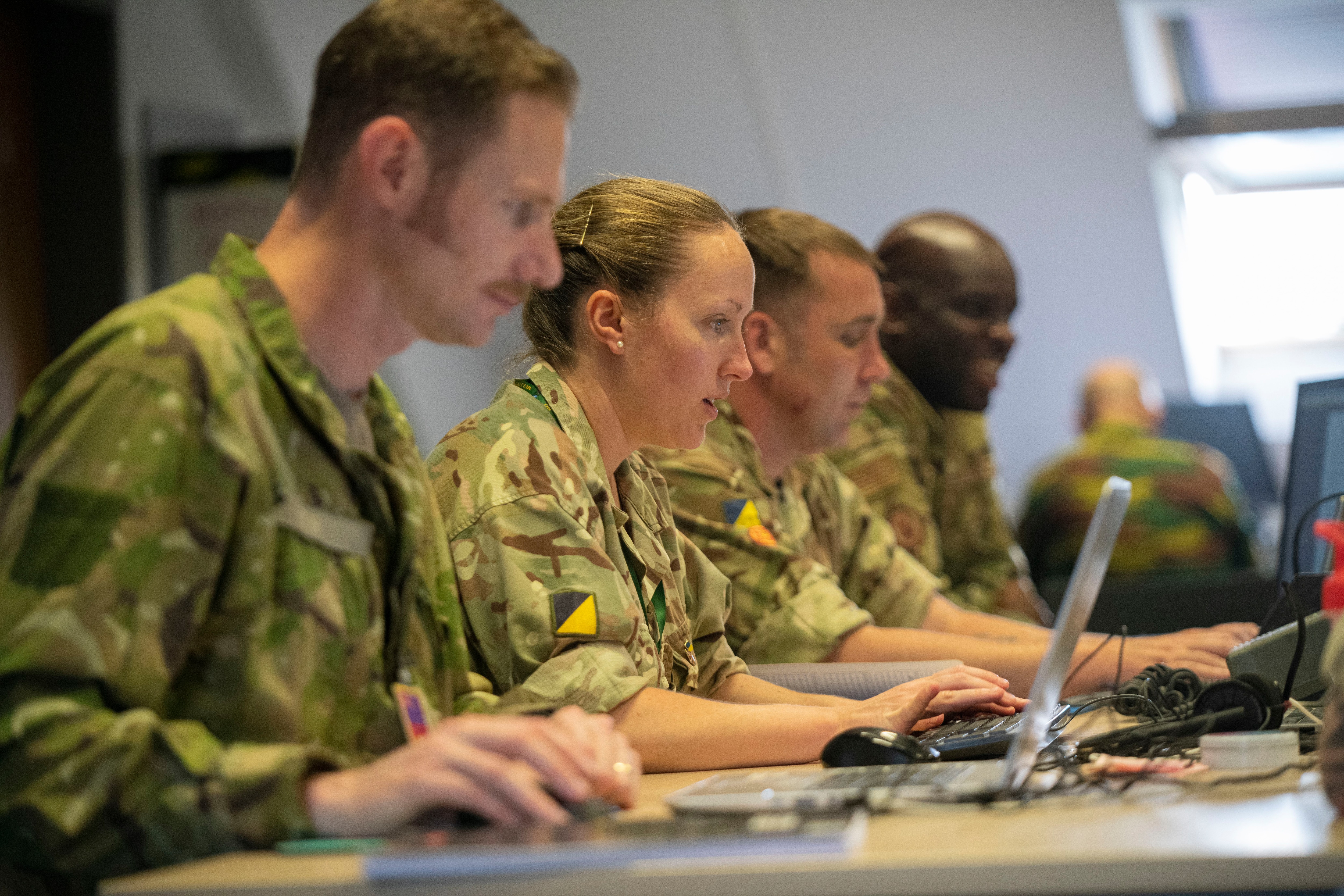 STUTTGART, Germany — As the war between invading Russian soldiers and defensive Ukrainian troops enters its sixth month, nations around the world have provided billions of dollars worth of military assistance to Kyiv to help defend its sovereignty.

Since early March, a cohort of American service members and a rotating crew of multinational partners have set up shop in U.S. European Command headquarters to ensure equipment gets from the donor nation to Ukraine’s doorstep.

That team, known as the EUCOM Control Center-Ukraine/International Donor Coordination Centre, or ECCU/IDCC, oversees the deliveries while also ensuring Ukrainians receive proper training for the equipment.

The logistics cell grew out of two discrete teams led by the U.S. and U.K. militaries, officials told reporters Wednesday at EUCOM headquarters at U.S. Army Garrison Stuttgart in southwest Germany. The command had set up the ECCU/IDCC to help coordinate partners’ military assistance going to Ukraine; its British counterparts had a similar idea. Now, the two nations lead the joint cell that includes allies and partners from around the world.

“Our aim is to support the Ukrainians to defend their sovereignty,” said Rear Adm. Duke Heinz, director of logistics at U.S. European Command. Shortly after the Russian invasion, the U.S. military saw a willingness from allies and partners to provide Ukrainians with security assistance.

“The goal was: We need to deconflict that,” Heinz said. “We don’t know how much the Ukrainians can absorb, and … we didn’t want border control crossing points that were delivering security assistance [and] munitions [at] the same border control points that independent agencies were using to deliver blankets and first aid kits.”

‘A coalition of the willing’

From a stifling hot — and air conditioning-free — secure multipurpose space known internally as “the Attic,” dozens of service members from across 26 NATO and non-NATO nations are separated into sections to work on plans, support efforts, communications, movements and operations. A row of foreign liaison officers from rotating nations are also present. A Ukrainian military representative is embedded with the team, identifying the requests coming from Kyiv that are then worked by the ECCU/IDCC team.

Officials described the process as similar to a registry, where Ukraine puts in a request for specific equipment, and participating nations identify the needs they can fill and to what extent.

The multinational team is a “coalition of the willing,” the officials said, providing any combination or amount of transportation, aid, training resources or funding.

Ever since the U.S. and U.K. groups merged in March, the cell’s functions have evolved. At the start of the war, the logistics coordination cell largely supported the delivery of small arms munitions and anti-tank equipment, said British Army Brig. Gen. Chris King, chief of the ECCU/IDCC. Then, it began helping transfer Soviet-era equipment that was more complex to move, yet familiar to Ukrainian forces, he added.

With the arrival of sophisticated equipment provided by NATO and other allies, the cell is now a “one-stop shop” that not only coordinates and tracks deliveries coming from all over the world to Ukraine, but also organizes the training of its armed forces to operate and sustain the equipment. The challenge is lining up the training schedule with equipment deliveries, Heinz noted.

That process is also multinational. King described a situation where the United Kingdom donated 105mm howitzers to Kyiv. Since New Zealand is an operator of that howitzer, the Pacific nation provided training support and parts, while the training itself was conducted in the United Kingdom. The U.S. military supplied ammunition and tactical vehicles to tow the howitzers.

The United States has trained approximately 1,500 Ukrainian troops to date, according to EUCOM. The United Kingdom has committed to providing a major training operation for Ukrainian forces, with the potential to train up to 10,000 soldiers every 120 days, a spokesperson said.

Despite Russian threats to disrupt the West’s efforts to arm Ukraine, the ECCU/IDCC team has so far avoided major issues, officials said.

The cell has not yet experienced a cyberattack or other forms of disruption from Russia, King said. “But [Russia] will continue to learn, and we need to be ready for that.”

Heinz said his team hasn’t experienced mobility obstacles in getting equipment to Ukraine’s borders. “Security assistance doesn’t stack up here on the continent in a warehouse,” he explained, adding that the longest time a piece of equipment would sit in an airport or train depot would be 12-24 hours.

When a nation offers to provide military assistance, the cell coordinates the logistics to keep the assets “in flow” from the providing nation to the border of Ukraine. The door-to-door process can take 48-96 hours, Heinz said.

Three allies bordering Ukraine are allowing military assistance to be dropped off on their borders; Poland is the sole nation that EUCOM would identify.

Two of the three nations allow Ukrainians to enter the country and travel to a specific pickup point to gather the equipment. “So the Ukrainians are responsible for the movement to the border, and what border control points they will transition into the country,” Heinz said.

The third nation requested equipment be taken right up to the border and transitioned from there, he added.

Asked about whether military systems could end up on the black market, Heinz said the team has been “very upfront” with Ukraine officials about “the intent” of the use for U.S.-provided military equipment.

“We’re not serial-number tracking these once they go across the border,” he noted. “We know everything that we’ve delivered. … We have an inventory of it. But once it crosses the border, it’s in the Ukrainians’ hands.”

He added that thus far, the team is unaware of any deliveries failing to reach their final destination.

As of July 21, the ECCU/IDCC team had coordinated the movement of 78,000 tons of military assistance over 1.4 million kilometers (869,920 miles)of airspace and 450,000 kilometers (279,617 miles) of ground distance. An estimated value for the delivered assistance was not immediately provided.

More than 800 flights have transported equipment to the Ukrainian border as of that date, but officials noted that while the cadence of deliveries to Ukraine remained constant over the past few months, those methods have changed.

In March and April, it was easy to fly in small arms as well as anti-tank and anti-armor capabilities that nations initially provided, Heinz noted. Now, as the equipment list expands to include tanks and howitzers, rail and sea methods are also being employed.

“But the flow has been nonstop,” he said. Even as European parliaments begin their summer vacations and the United States preps for midterm elections in a few months, there’s no fear of a “summer lull” in deliveries, he added.

King noted that when the cell was first set up, the team was moving quickly to coordinate the rapidly incoming military assistance donations. Now, the team is planning deliveries up to two months out, he said.

The flow of Soviet-era equipment has started to dwindle, but the countries who donated those assets are now interested in replacing those aged systems with NATO-specific military assets, Heinz noted. “I think the future for the alliance looks fairly bright, from a military equipment footing perspective,” he said.

There remains one supplier of Soviet-era 152mm and 122mm mortar shells that’s providing equipment from a hot production line, Heinz said, though he declined to name the supplier.

More equipment on the horizon

On Wednesday, the U.S. Defense Department announced it would send additional M142 High Mobility Artillery Rocket Systems to Ukraine, bringing the total number committed up to 16.

As Kyiv’s military assistance registry grows and evolves over the course of the war, Heinz said he will not rule out the U.S. providing other types of high-performance equipment.

“This conflict is very different from three and a half months ago,” he noted. “If you had asked us then, ‘Hey, would you think you’re going to deliver HIMARS to the Ukrainians?’ I would have said, ‘Probably not.’ ”

“So I would be cautious to say: ‘We won’t deliver X to the Ukrainians,’ ” he added. “Based on their ability to fight and win, as they’ve shown, anything’s on the table.”

Vivienne Machi is a reporter based in Stuttgart, Germany, contributing to Defense News’ European coverage. She previously reported for National Defense Magazine, Defense Daily, Via Satellite, Foreign Policy and the Dayton Daily News. She was named the Defence Media Awards’ best young defense journalist in 2020.