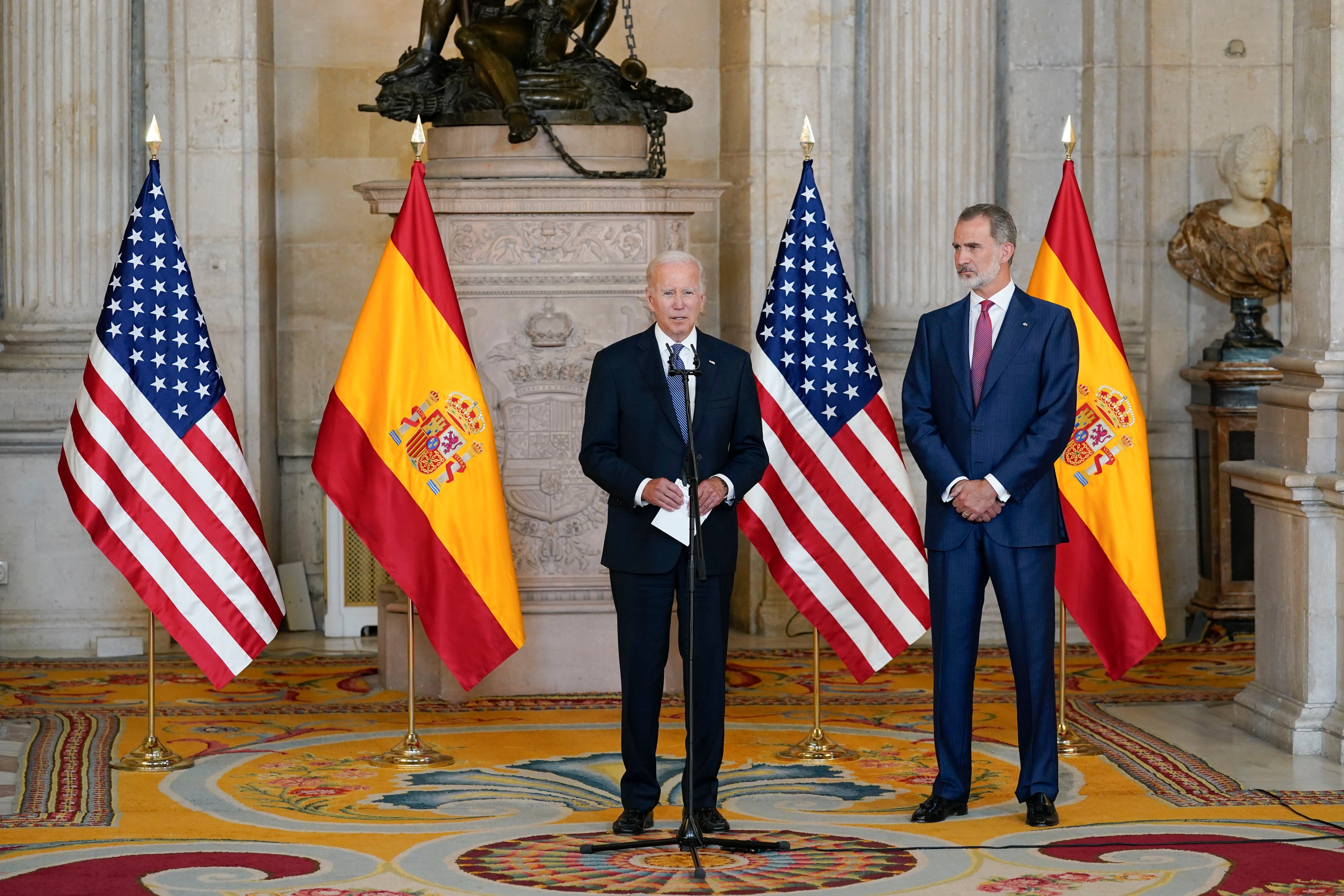 MADRID — Turkey agreed Tuesday to lift its opposition to Sweden and Finland joining NATO, a breakthrough in an impasse clouding a leaders’ summit in Madrid amid Europe’s worst security crisis in decades triggered by the war in Ukraine.

“We now have an agreement that paves the way for Finland and Sweden to join NATO,” alliance Secretary General Jens Stoltenberg said following top-level talks.

Finnish President Sauli Niinistö said the three countries’ leaders signed a joint agreement after talks on Tuesday. Turkey said it had “got what it wanted” including “full cooperation … in the fight against” the rebel groups.

The agreement comes at the opening of a crucial summit dominated by Russia’s invasion of Ukraine. U.S. President Joe Biden and other NATO leaders arrived in Madrid for a summit that will set the course of the alliance for the coming years. The summit was kicking off with a leaders’ dinner hosted by Spain’s King Felipe VI at the 18th-century Royal Palace of Madrid.

Stoltenberg said the meeting would chart a blueprint for the alliance “in a more dangerous and unpredictable world.”

“To be able to defend in a more dangerous world we have to invest more in our defense,” Stoltenberg said. Just nine of NATO’s 30 members meet the organization’s target of spending 2% of gross domestic product on defense. Spain, which is hosting the summit, spends just half that.

Top of the agenda for leaders in meetings Wednesday and Thursday is strengthening defenses against Russia and supporting Ukraine. Biden, who arrived with the aim of stiffening the resolve of any wavering allies, said NATO was “as united and galvanized as I think we have ever been.”

Moscow’s invasion on Feb. 24 shattered European security and brought shelling of cities and bloody ground battles back to the continent. NATO, which had begun to turn its focus to terrorism and other nonstate threats, has had to confront an adversarial Russia once again.

“Ukraine now faces a brutality which we haven’t seen in Europe since the Second World War,” Stoltenberg said.

Diplomats and leaders from Turkey, Sweden and Finland earlier held a flurry of talks in an attempt to break the impasse over Turkey’s opposition to expansion. The three countries’ leaders met for more than two hours alongside Stoltenberg on Tuesday before the agreement was announced.

Erdoğan is critical of what he considers the lax approach of Sweden and Finland toward groups that Ankara deems national security threats, including the Kurdistan Workers’ Party, or PKK, and its Syrian extension. American support for Syrian Kurdish fighters in combatting the Islamic State group has also enraged Turkey for years.

Turkey has demanded that Finland and Sweden extradite wanted individuals and lift arms restrictions imposed after Turkey’s 2019 military incursion into northeast Syria. Ending the deadlock will allow NATO leaders to focus on their key issue: an increasingly unpredictable and aggressive Russia.

A Russian missile strike Monday on a shopping mall in the central Ukrainian city of Kremenchuk was a grim reminder of the war’s horrors. Some saw the timing — as Group of Seven leaders met in Germany and just ahead of NATO — as a message from Moscow.

Ukrainian President Volodymyr Zelenskyy, who is due to address NATO leaders by video on Wednesday, called the strike on the mall a “terrorist” act.

Kyiv Mayor Vitali Klitschko traveled to Madrid to urge the alliance to provide his country with “whatever it takes” to stop the war.

“Wake up, guys. This is happening now. You are going to be next, this is going to be knocking on your door just in the blink of an eye,” Klitschko told reporters at the summit venue.

Stoltenberg said Monday that NATO allies will agree at the summit to increase the strength of the alliance’s rapid reaction force nearly eightfold, from 40,000 to 300,000 troops. The troops will be based in their home nations, but dedicated to specific countries on NATO’s eastern front, where the alliance plans to build up stocks of equipment and ammunition.

Beneath the surface, there are tensions within NATO over how the war will end and what, if any, concessions Ukraine should make to end the fighting.

There are also differences on how hard a line to take on China in NATO’s new Strategic Concept — its once-a-decade set of priorities and goals. The last document, published in 2010, didn’t mention China at all.

The new concept is expected to set out NATO’s approach on issues from cybersecurity to climate change — and the growing economic and military reach of China, as well as the rising importance and power of the Indo-Pacific region. For the first time, the leaders of Japan, Australia, South Korea and New Zealand are attending the summit as guests.

Some European members are wary of the tough U.S. line on Beijing and don’t want China cast as an opponent.

In the Strategic Concept, NATO is set to declare Russia its No. 1 threat.

Russian state space agency Roscosmos marked the summit’s opening by releasing satellite images and coordinates of the Madrid conference hall where it is being held, along with those of the White House, the Pentagon and the government headquarters in London, Paris and Berlin.

The agency said NATO was set to declare Russia an enemy at the summit, adding that it was publishing precise coordinates “just in case.”