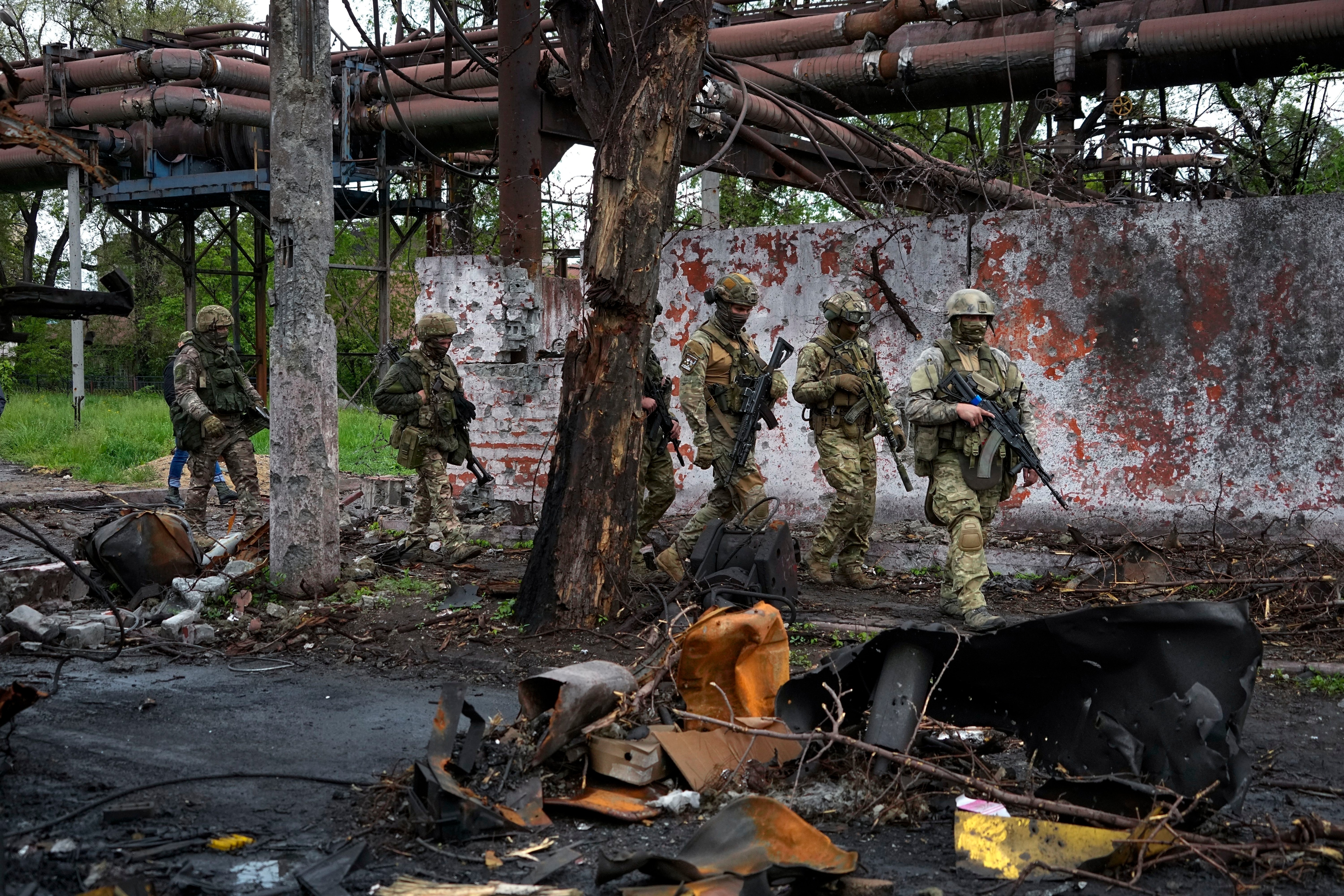 POKROVSK, Ukraine (AP) — Russian and Ukrainian troops engaged in close-quarter combat in an eastern Ukraine city Sunday as Moscow’s soldiers, supported by intense shelling, attempted to gain strategic footholds for conquering the region in the face of fierce Ukrainian resistance.

Ukrainian regional officials reported that Russian forces were “storming” Sievierodonetsk after trying unsuccessfully to encircle the city. The fighting knocked out power and cellphone service, and a humanitarian relief center could not operate because of the danger, the mayor said.

Sievierodonetsk, located about 143 kilometers (89 miles) south of the Russian border, emerged in recent days as the epicenter of Moscow’s quest to capture all of Ukraine’s industrial Donbas region. Russia also stepped up its efforts to take nearby Lysychansk, where civilians rushed to escape persistent shelling.

The two cities are the last major areas under Ukrainian control in Luhansk province, which makes up the Donbas together with neighboring Donetsk. Russia is focused, after failing to seize Ukraine’s capital, on occupying parts of Donbas not already controlled by pro-Moscow separatists.

Russian forces made small advances in recent days as bombardments chewed away at Ukrainian positions and kept civilians trapped in basements or desperately trying to get out safely. Attacks to destroy military targets throughout the country also caused casualties in civilian areas

Ukrainian President Volodymyr Zelenskyy described the situation in the east as “indescribably difficult.” The “Russian army is trying to squeeze at least some result’’ by concentrating its attacks there, he said in a Saturday night video address.

Civilians who reached the eastern city of Pokrovsk, about 130 kilometers (80 miles) south of Lysychansk, said they held out as long as they could before fleeing the Russian advance.

Yana Skakova choked back tears as she described leaving with her 18-month and 4-year-old sons while her husband stayed behind to take care of their house and animals. The family was among 18 people who lived in a basement for the past 2 1/2 months until police told them Friday it was time to evacuate.

“None of us wanted to leave our native city,” she said. “But for the sake of these small children, we decided to leave.”

Sievierodonetsk Mayor Oleksandr Striuk said there was fighting at the city’s bus station on Saturday. Residents remaining in the city, which had a prewar population of around 100,000, risked exposure to shelling to get water from a half-dozen wells, and there was no electricity or cellphone service, Striuk said.

Striuk has estimated that 1,500 civilians have died in Russian attacks since the beginning of the war, as well as from a lack of medicine and diseases that couldn’t be treated.

The Institute for the Study of War. a think tank based in Washington, questioned the Kremlin’s strategy of assembling a huge military effort to take Sieverodonetsk, saying it was proving costly for Russia and would bring few returns.

“When the Battle of Sieverodonetsk ends, regardless of which side holds the city, the Russian offensive at the operational and strategic levels will likely have culminated, giving Ukraine the chance to restart its operational-level counteroffensives to push Russian forces back,” the institute said in an assessment published late Saturday.

The deteriorating conditions raised fears that Sieverodonetsk could become the next Mariupol, a port city 281 kilometers (175 miles) to the south that spent nearly three months under siege before the last Ukrainian fighters surrendered.

An aide to Mariupol’s Ukrainian mayor alleged Sunday that after Russia’s forces gained complete control of Mariupol, they piled bodies of dead people inside a supermarket.

The aide, Petro Andryushchenko, posted a photo on the Telegram messaging app of what he described as a “corpse dump” in the occupied city. It showed bodies stacked alongside closed supermarket counters.

It was not immediately possible to verify his claim or the authenticity of the photo, which Andryushchenko described as recent.

“Here, the Russians bring the bodies of the dead, which were washed out of their graves during attempts to restore the water supply, and partially exhumed. They just dump them like garbage,” he wrote.

Haidai, the provincial governor of Luhansk, said constant shelling created a “severe” situation in Lysychansk. “There are fatalities and wounded people,” he wrote on Telegram, without elaborating.

On Saturday, he said, one civilian died and four were injured after a Russian shell hit a high-rise apartment building.

But some Luhansk supply and evacuation routes still functioned Sunday, he said. He claimed the Russians had retreated “with losses” from around a village near Sievierodonetsk but conducted airstrikes on another nearby village located on the strategic Siverskiy Donetsk river.

The Ukrainian military said Sunday that Russian forces also were trying to strengthen their positions around Lyman, a small city that serves as a key rail hub in the Donetsk region.

Moscow claimed Saturday to have taken Lyman, but Ukrainian authorities said their fighters remained engaged in combat in parts of the city.

“The enemy is reinforcing its units,” the Ukrainian armed forces’ General Staff said in an operational update. “It is trying to gain a foothold in the area.”

The Ukrainian army said that heavy fighting was ongoing around Donetsk, the provincial capital.

The State Emergency Service of Ukraine said Sunday that Russian shelling caused fires around Kharkiv, the country’s second-largest city. Russia has kept up a bombardment of Kharkiv, located in northeastern Ukraine, after Ukrainian fighters pushed its forces back from positions near the city several weeks ago.

Zelenskyy visited Kharkiv on Sunday. The regional governor, Oleh Syniehubov, told the president that Russian troops remained in possession of around 30% of the Kharkiv region, while Kyiv’s troops had recaptured another 5%.

Syniehubov reported that Russian attacks had destroyed more than 2,000 apartment buildings, with the northern and eastern parts of Kharkiv city particularly affected.

“I feel boundless pride in our defenders. Every day, risking their lives, they fight for Ukraine’s freedom,” he wrote in a Telegram post.

The Ukrainian Border Guard Service said border areas in the Sumy region, east of Kharkiv, were hit with six unguided missiles. The agency did not mention reports of any casualties.

Ukrainian emergency services confirmed an industrial plant in Kryvyi Rih caught fire after a strike by two Russian rockets and sustained “significant damage.” Officials did not say whether it was being used as a military depot.