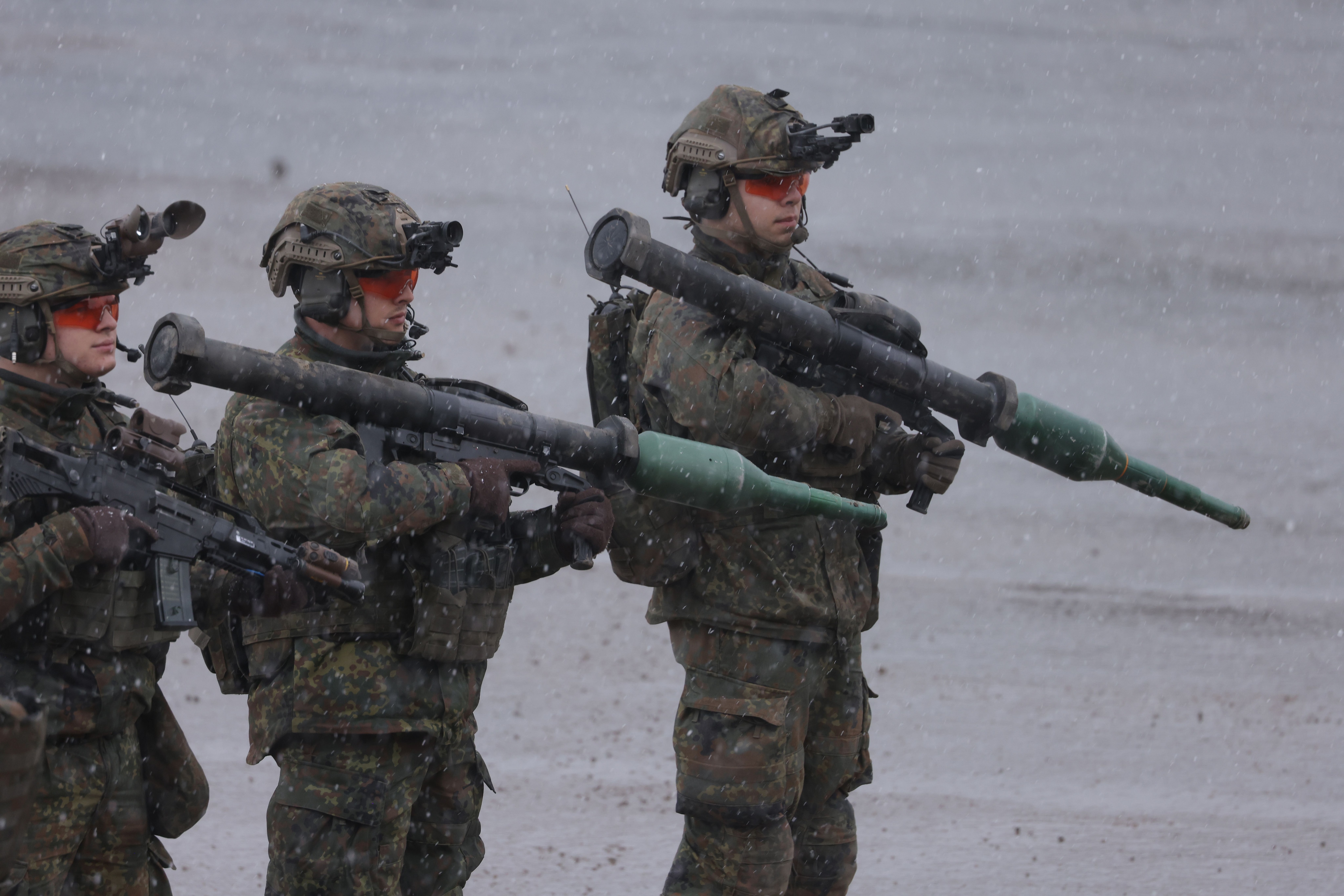 Editor’s note: This article was first published on HistoryNet, our sister publication. Subscribe to its newsletter here.

Though the Russian Army was once vaunted as the second-best military in the modern world, the greatly underestimated Ukrainian military has showed it up again and again, seemingly with only national pluck and a hodgepodge of donated weapons from sympathetic Western countries.

Among the borrowed Ukrainian arsenal, the Panzerfaust 3 has made an impressive showing against Russian armored columns. What is this shoulder-fired antitank rocket, where did it come from, and why is it striking fear into Vladimir Putin’s soldiers?

In 1943, with a resurgent Soviet army advancing on the Third Reich behind a phalanx of first-class tanks being produced in numbers that Germany has no hope of matching, Germany developed a small, simple, easy to use antitank weapon that could turn any wielder into a tank killer. Called the Panzerfaust (“armor fist”), it was essentially a tube that launched a rocket-propelled grenade with a shaped charge capable of penetrating armor at ranges up to 200 feet. The launching tube could be reloaded if extra warheads were available, but inexpensive enough to be discarded if they were not.

Distributed among soldiers and, as of Oct. 18, 1944, to hastily trained elders and children of the Volkssturm (“people’s storm,” Nazi Germany’s last-ditch national militia), the Panzerfaust required extraordinary courage to operate at its effective range and was not reliable enough to save the Reich from its ultimate doom on May 8 (or May 9, depending on who you ask) the next year.

It became a Cold War staple

It was, however, effective enough for postwar armies on either side of Iron Curtain to make improvements on its basic design. That includes the current German Bundeswehr (Federal Armed Forces) in the form of the Panzerfaust 3. After entering combat in Afghanistan with the Bundeswehr, the new generation of Panzerfausts is again battling Russian tanks … except that the people wielding the antitank weapons are Ukrainian.

In response to a 1973 order for a more powerful, accurate semi-disposable weapon to replace the World War II-vintage PzF-44, capable of engaging the latest generation of Russian T-72 and T-80 tanks, the Dynomit Nobel Allgemeine Gesellschaft worked on this latest version of the antitank rocket from 1978 to 1995, though the Panzerfaust 3 was accepted by the Bundeswehr in 1992.

The modern Panzerfaust 3 is a tank-killing machine

It has since undergone technical upgrades to keep up with improvements in tanks, especially the Panzerfaust 3-T, which uses a dual hollow-charge tandem warhead, with a spike on the front of the warhead that can set off reactive armor and in so doing free a path for the main charge to reach and penetrate up to 31.5 inches of steel armor. As a further improvement, the Panzerfaust 3-IT600 gets its designation from the user’s ability to engage enemy armored vehicles at up to 600 meters by using a Simrad Optonics sighting-and-targeting mechanism.

Once fired, the warhead is sent on its way by a spring, but after about 16.5 feet, the rocket motor ignites and the safety disengages, allowing the warhead to explode on contact with its target. The warhead also contains plastic granulate that work on the recoilless countermass principle to virtually eliminate backblast.

The Panzerfaust 3-IT600 is 3 feet, 11 inches long and weighs 34 pounds, 6 ounces, of which 8 pounds, 10 ounces is the 110mm-diameter (4.3-inch diameter) warhead with Amatol/Sindal high explosive. Up to 29 pounds, 5 ounces of spare rounds can be carried by the operator.

With a muzzle velocity of 499 feet per second, the warhead has a maximum effective range of 1,312 feet on a stationary target and 1,968.5 feet against a moving target. Minimum effective range (without the debris of an exploding target endangering the user) is 65.6 feet.

These capabilities pale beside the 125mm (4.9-inch) main gun with a 1.86-mile range on Russia’s latest main battle tank, the T-90, in an open battlefield. As with the original PzF-44, however, Panzerfaust 3 operated on uneven ground, forested areas or urban environments by trained, motivated troops can be every bit as deadly as designed.

Once under full production, the original Panzerfaust 3 cost $9,994, but the IT-600 version costs $11,108 apiece because of its computerized sight. A standard antitank round costs $297, but there is also a Bunkerfaust (“bunker fist”) round for use against static enemy positions. That costs $202.

As of 2003, 261,718 Panzerfaust 3s have been produced. In 1989, Japan became the first foreign power to purchase the weapon, followed by Switzerland in 1991. Since then, it has also entered the arsenals of Austria, Italy, the Netherlands, Peru, South Korea Iraq and Mauritius. Ukraine added its name to that list when Russian forces invaded it in February 2022 and a variety of sympathetic Western powers began supplying weapons — including the Panzerfaust 3 — to bolster Ukraine’s defenses. Thus far, the Ukrainians have been putting them to very good use, much to the expense of a growing number of Russian armor crews.