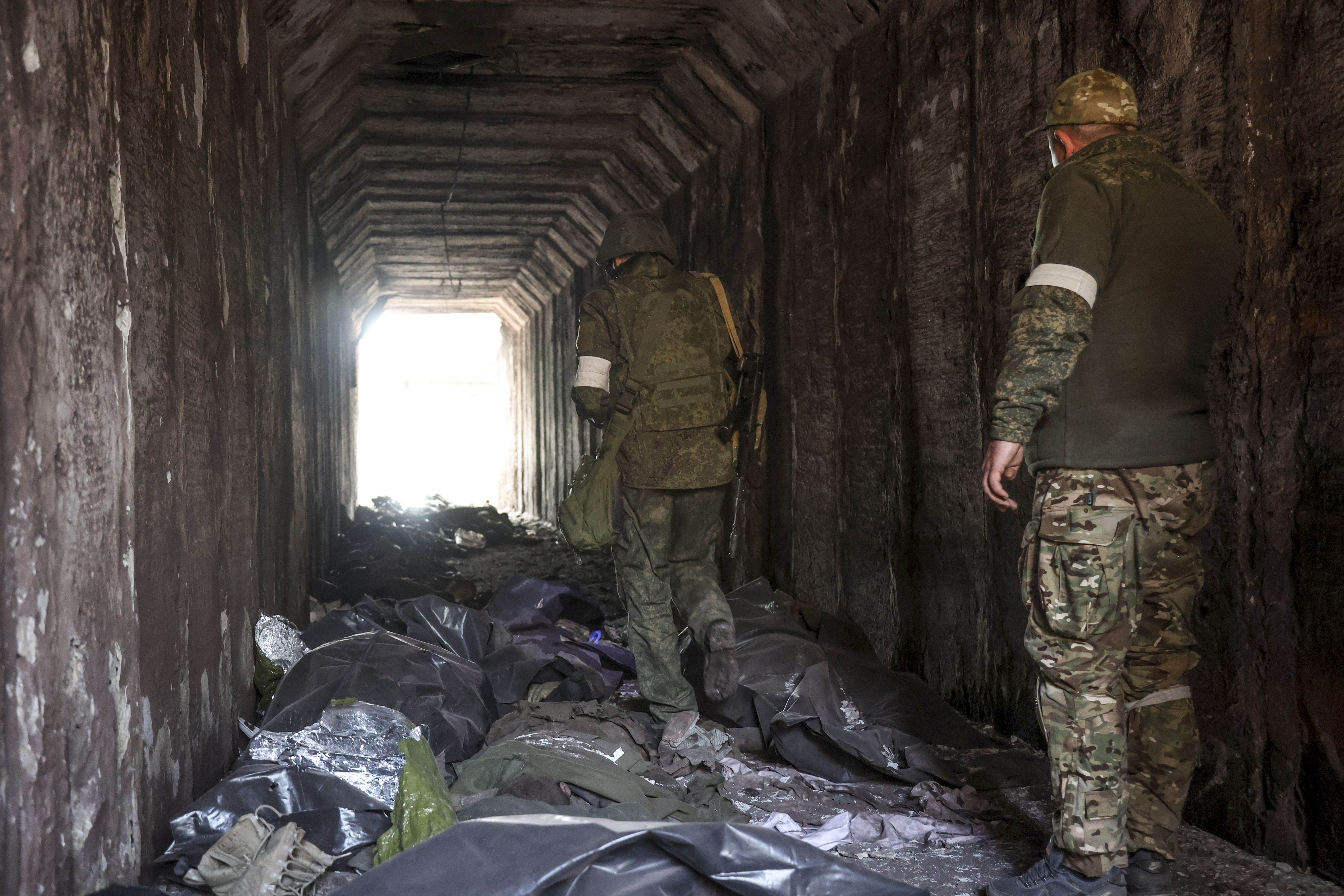 LVIV, Ukraine (AP) — Heavy fighting raged Thursday at the besieged steel plant in Mariupol, as Russian forces attempted to finish off the city’s last-ditch defenders and complete the capture of the strategically vital port.

The bloody battle came amid growing suspicions that President Vladimir Putin wants to present the Russian people with a major battlefield success — or perhaps announce an escalation of the war — in time for Victory Day on Monday. That is the biggest patriotic holiday on the Russian calendar, marking the Soviet Union’s triumph over Nazi Germany.

Ten weeks into a devastating war, Ukraine’s military claimed Thursday it recaptured some areas in the south and repelled other attacks in the east, further frustrating Putin’s ambitions.

Ukrainian and Russian forces are fighting village by village, as Moscow struggles to gain momentum in the eastern industrial heartland of the Donbas. Russia switched its focus to that region — where Moscow-backed separatists have fought Ukrainian forces for years — after a stiffer than expected resistance bogged its troops down and thwarted its initial goal of overrunning the capital.

In an interview with The Associated Press on Thursday, Belarus President Alexander Lukashenko said he hadn’t expected the Russian offensive to “drag on this way.” Some Russian troops used ally Belarus as a launch pad for the invasion on Feb. 24, and Lukashenko publicly supported the operation.

“But I am not immersed in this problem enough to say whether it goes according to plan, like the Russians say, or like I feel it,” the authoritarian leader said.

In the most searing example of how Ukrainian forces have slowed Russia’s progress, Ukrainian fighters are holed up in the tunnels and bunkers under the sprawling Azovstal steel mill in Mariupol — the last pocket of resistance in a city that is otherwise controlled by Moscow’s forces. Civilians, believed to number around a few hundred, are also trapped inside the plant.

Ukraine said its fighters drove back a Russian assault into the giant mill, which was also being bombed from above. Videos shared online appeared to show the steel mill targeted by intense shelling at dawn Thursday.

“The Russian troops entered the territory of Azovstal, but were kicked out by our defenders,” Oleksiy Arestovych, a presidential adviser, said in remarks on Ukrainian television. “We can say that the fighting is ongoing.”

The Kremlin denied that there was any ground assault.

Mariupol’s fall would be a major battlefield success for Moscow, depriving Ukraine of a vital port and allowing Russia to establish a land corridor to the Crimean Peninsula, which it seized from Ukraine in 2014, and free up troops to fight elsewhere in the Donbas.

With his troops making slow progress elsewhere, Putin may be looking to declare a win at the plant in time for Victory Day. Some have also suggested he could use the celebrations to expand what he calls the “special military operation.”

A declaration of all-out war would allow the Russian leader to introduce martial law and mobilize reservists to make up for significant troop losses. The Kremlin has dismissed the speculation.

The city, and the plant in particular, have come to symbolize the misery inflicted by the war. The Russians have pulverized most of Mariupol in a two-month siege that has trapped civilians with little food, water, medicine or heat. Civilians sheltering inside the plant have perhaps suffered even more. About 100 of them were evacuated over the weekend — the first time some saw daylight in months.

A Ukrainian officer leading defenders at the last Mariupol bastion urged the global community to pressure Russia into allowing more civilians to be rescued along with wounded soldiers. It is unclear how many Ukrainian fighters are still inside the plant, but the Russians put the number at about 2,000 in recent weeks, and 500 were reported to be wounded.

“Wounded soldiers are dying in agony due to the lack of proper treatment,” Capt. Sviatoslav Palamar, the deputy commander of the Azov Regiment, said in a video statement.

The Russian government said it would open another evacuation corridor from the plant during certain hours on Thursday through Saturday. But there was no immediate confirmation of those arrangements from other parties, and many previous assurances from the Kremlin have fallen through, with the Ukrainians blaming continued fighting by the Russians.

As the battle raged in Mariupol, Russian forces shelled elsewhere in the Donbas and also kept up their bombardment of railroad stations and other supply-line targets across the country — part of an effort to disrupt the supply of Western arms, which have been critical to Ukraine’s defense.

Ukrainian forces said Thursday they made some gains on the border of the southern regions of Kherson and Mykolaiv and repelled 11 Russian attacks in the Donetsk and Luhansk regions that make up the Donbas.

Five people were killed and at least 25 more wounded in shelling of cities in the Donbas over the past 24 hours, Ukrainian officials said. The attacks damaged houses and a school as well.

A day after Russian attacks were reported near Kyiv, the capital; in Cherkasy and Dnipro in central Ukraine; and in Zaporizhzhia in the southeast, air raid sirens sounded anew Thursday in the western city of Lviv, which has been a gateway for western arms and served as a relative safe haven for people fleeing fighting farther east.

An assessment by the Washington-based Institute for the Study of War said Russian forces were struggling to gain traction.

The war has flattened swaths of cities and destroyed roads and bridges, and driven millions from their homes, including many who have crossed into other countries.

With the challenge of rebuilding and demining after the war in mind, Ukrainian President Volodymyr Zelenskyy on Thursday announced the launch of a global fundraising digital platform called United24. At the same time, Poland hosted an international donor conference that raise $6.5 billion in humanitarian aid.

Meanwhile, Belarus announced the start of military exercises Wednesday. A top Ukrainian official said the country will be ready to act if Belarus joins the fighting.

The British Defense Ministry said it does not anticipate that the drills currently posed a threat to Ukraine, but that Moscow will likely use them “to fix Ukrainian forces in the north, preventing them from being committed to the battle for the Donbas.”