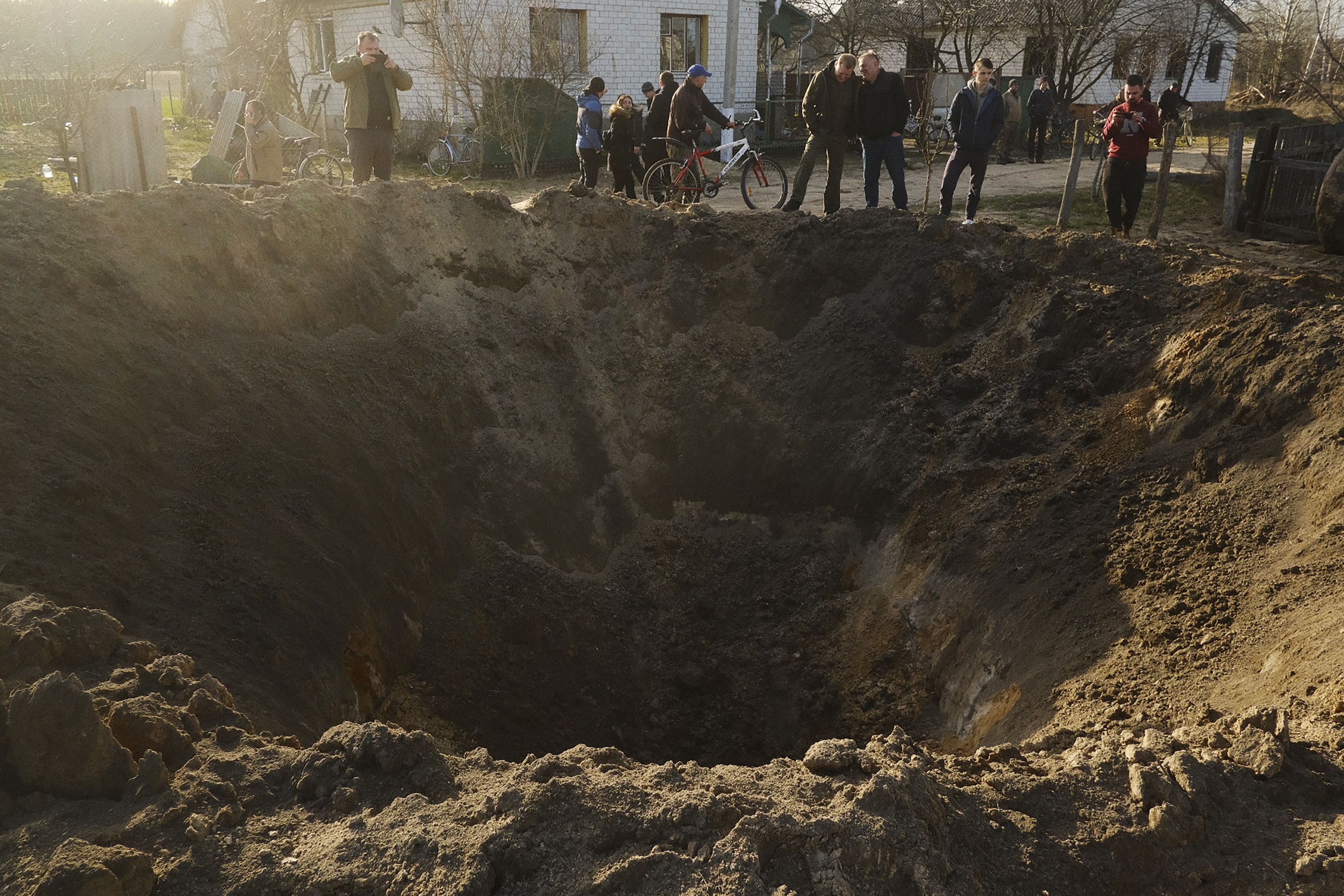 KYIV, Ukraine (AP) — A day after Moscow suffered a stinging symbolic defeat with the loss of the flagship of its Black Sea fleet, Russia’s Defense Ministry promised Friday to ramp up missile attacks on the Ukrainian capital in response to Ukraine’s alleged military “diversions on the Russian territory.”

The threat of intensified attacks on Kyiv came after Russian authorities accused Ukraine of wounding seven people and damaging about 100 residential buildings with airstrikes on Bryansk, a region that borders Ukraine. Authorities in another border region of Russia also reported Ukrainian shelling Thursday.

Kyiv has gradually displayed some signs of pre-war life after Russian troops failed to capture the city and retreated to focus on a concentrated assault in eastern Ukraine, leaving evidence of possible war crimes in their wake. A renewed bombardment could return the capital’s residents to sheltering in subway stations and the steady wail of air raid sirens.

Ukrainian officials have not confirmed striking targets in Russia, and the reports by Russian authorities could not be independently verified. However, Ukrainian officials claimed their forces struck a key Russian warship with missiles on Thursday. If true, the claim would represent an important victory.

The guided-missile cruiser Moskva, named for the Russian capital, sank while being towed to port Thursday after suffering heavy damage under circumstances that remained in dispute. Moscow acknowledged a fire on board but not any attack. U.S. and other Western officials could not confirm what caused the blaze.

The Moskva had the capacity to carry 16 long-range cruise missiles, and its removal reduces Russia’s firepower in the Black Sea. If Ukrainian forces took out the vessel, the Moskva likely represents the largest warship to be sunk in combat since the Falklands War. A British submarine torpedoed an Argentine navy cruiser called the ARA General Belgrano during the 1982 conflict, killing over 300 sailors on board.

The Russian warship’s loss in an invasion already widely seen as a historic blunder also was a symbolic defeat for Moscow as its troops regroup for an offensive in eastern Ukraine after retreating from the Kyiv region and much of the north.

In his nightly address Thursday, Ukrainian President Volodymyr Zelenskyy said the people of his country should be proud of having survived 50 days under attack when the Russian invaders “gave us a maximum of five.”

Zelenskyy did not mention the Moskva by name, but while listing the ways Ukraine has defended against the onslaught, mentioned “those who showed that Russian warships can sail away, even if it’s to the bottom” of the sea. It was his only reference to the Moskva.

News about the flagship overshadowed Russian claims of advances in the southern port city of Mariupol, where Moscow’s forces have been battling the Ukrainians since the early days of the invasion in some of the heaviest fighting of the war — at a horrific cost to civilians.

Dwindling numbers of Ukrainian defenders in Mariupol are holding out against a siege that has trapped well over 100,000 civilians in desperate need of food, water and heating. David Beasley, executive director of the U.N. World Food Program, told The Associated Press in an interview Thursday that people were being “starved to death” in the besieged city.

Mariupol’s mayor said this week that more than 10,000 civilians had died and the death toll could surpass 20,000. Other Ukrainian officials have said they expect to find evidence of atrocities committed against civilians like the ones discovered in Bucha and other towns outside Kyiv once the Russians withdrew.

The Mariupol City Council said Friday that locals reported seeing Russian troops digging up bodies that were buried in residential courtyards and not allowing any new burials “of people killed by them.”

“Why the exhumation is being carried out and where the bodies will be taken is unknown,” the council said in a statement posted on the Telegram messaging app.

Mariupol’s capture is critical for Russia because it would allow its forces in the south, which came up through the annexed Crimean Peninsula, to fully link up with troops in the Donbas region, Ukraine’s eastern industrial heartland and the target of the looming offensive.

Moscow-backed separatists have fought Ukrainian forces in the Donbas since 2014, the same year Russia seized Crimea from Ukraine. Russia has recognized the independence of two rebel-held areas of the region.

Although it’s not certain when Russia will launch the full-scale campaign, a regional Ukrainian official said Friday that seven people died and 27 were injured after Russian forces opened fire on buses carrying civilians in the village of Borovaya, near the northeastern city of Kharkiv.

Chubenko said that Ukrainian authorities had opened criminal proceedings in connection with a suspected “violation of the laws and customs of war, combined with premeditated murder.” The claims of an attack on civilian buses could not be independently verified.

The Russian Defense Ministry said Friday that Russian strikes in the Kharkiv region “liquidated a squad of mercenaries from a Polish private military company” of up to 30 people and “liberated” an iron and steel factor in Mariupol from “Ukrainian nationalists.” The claims could not be independently verified.

On Thursday, the Defense Ministry explained the damage to Russia’s Black Sea flagship by a fire had caused ammunition stowed on board to detonate. In addition to the cruise missiles, the warship also had air-defense missiles and other guns.

The ministry did not say what might have caused the blaze but reported that the “main missile weapons” were not damaged and the crew, which usually numbers about 500, abandoned the vessel. It wasn’t clear if there were any casualties.

Maksym Marchenko, the governor of Ukraine’s Black Sea region of Odesa, said Ukrainian forces struck the Moskva with two Neptune missiles and caused “serious damage.” The Neptune is an anti-ship missile that was recently developed by Ukraine based on an earlier Soviet design.

The missile’s launchers are mounted on trucks stationed near the coast, and, according to the Washington-based Center for Strategic and International Studies, can hit targets up to 280 kilometers (175 miles) away. That would have put the Moskva within range, based on where the ship was when the fire began.

Launched as the Slava in 1979, the cruiser saw service in the Cold War and during conflicts in Georgia and Syria, and helped conduct peacetime scientific research with the United States. During the Cold War, it carried nuclear weapons.

British defense officials said the Moskva’s loss would likely force Moscow to change how its naval forces operate in the Black Sea. In a social media post Friday, the U.K. Ministry of Defense said the ship, which returned to operational service last year after a major refit, “served a key role as both a command vessel and air defense node.”

Russia invaded Ukraine on Feb. 24 and has lsuffered thousands of military casualties. The conflict has killed untold numbers of Ukrainian civilians and forced millions more to flee.

It has also further inflated prices at grocery stores and gasoline pumps, while dragging on the global economy. The head of the International Monetary Fund said Thursday that the war helped push the organization to downgrade economic forecasts for 143 countries.