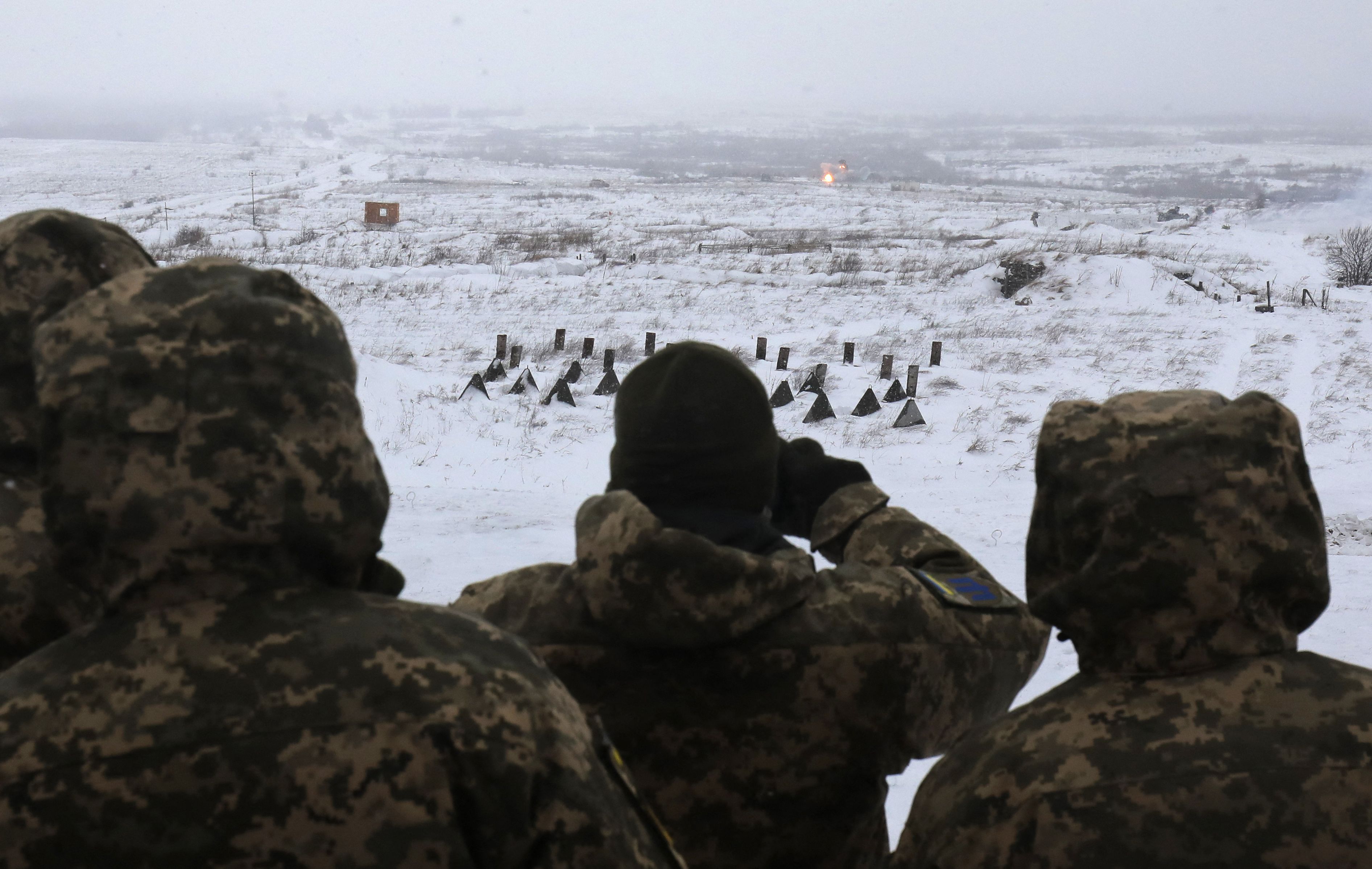 WASHINGTON — As roughly 100,000 Russian troops amass around Ukraine, a series of emerging crises around the world — the Middle East, China, North Korea — are demanding the full attention of NATO, and particularly its most powerful member, the United States.

Now, there’s a growing sense among national security experts that the crisis in Ukraine is just one of many conflicts on the precipice, putting pressure on the alliance and its member countries to address this threat and at the same time brace for the next one.

Julianne Smith, the U.S. ambassador to NATO, described the ongoing dispute between Russia and Ukraine as a “microcosm” of the types of threats Western analysts were expecting all along. “All of this is becoming very real,” she said this week at a panel in Brussels sponsored by the German Marshall Fund of the United States.

At the same time, “something could happen on China and Taiwan next week,” said Ian Lesser, vice president at the think tank, referring to the possibility of China attacking the U.S.-backed island nation that Beijing sees as a renegade province to be eventually united with the mainland.

Asked about that possibility on Thursday, Defense Department spokesman John Kirby said the military remains watchful of other theaters.

“I think the gist of your question is, why can’t we walk and chew gum at the same time,” he told reporters at the Pentagon. “We can, and we are. … Just because we’re focused on bolstering our allies because of the worrisome accumulation of combat-credible power by the Russians in and around Ukraine doesn’t mean that we aren’t focused on the pacing challenge that China represents to the department.”

As NATO tries to use diplomacy to defuse tensions in Ukraine, planners are finding the standoff reflects many of the characteristics slated to make up the alliance’s new strategic concept.

Analysts have long said the upcoming revision, up for approval at the alliance’s Madrid summit in late June, must consider defenses against information warfare, cyber attacks, economic pressure and an overall increase in conflict complexity that exceeds that of traditional military operations.

Much of that is happening right now,

With NATO and U.S. written responses delivered to Moscow on Wednesday, diplomacy is still running its course. Russia wants the alliance to close the door to an eventual Ukrainian membership, a prospect considered notional at best even within NATO.

Alliance officials, in turn, have touted the principle that Russia’s neighbor nations should be able to pick their own path in matters of defense and security.

That idea doesn’t sit well with the Kremlin, where President Vladimir Putin is nursing dreams of restoring past Russian grandeur along ethnic, religious and language lines, incorporating some of its neighbors, according to Western analysts.

“I think the West is doing fairly well in managing a conflict that cannot be deterred,” said Hal Brands, a senior fellow with Washington-based American Enterprise Institute, a conservative think tank, and a professor at Johns Hopkins School of Advanced International Studies.

Brands said he believes Moscow’s demands were so outrageous an eventual armed confrontation was likely baked into them from the start. At this point, he said, Putin may be more interested in continuing the pace of escalation rather than agreeing to a diplomatic solution.

Deterrence has been the name of the game in Europe, however, where countries are trumpeting weapon shipments large and small into Ukraine, publicly scorning the one government not going along: Berlin.

European countries still view their relationship with Russia through bilateral lenses, said Rachel Rizzo, an analyst with the Atlantic Council think tank. “That’s why they are sidelined,” she added, referring to the fact that the European Union has no formal role in the ongoing negotiations.

German government officials have defended their position of sending only help that neither shoots nor explodes, like helmets, arguing a plus-up in combat capabilities would be too insignificant to warrant undermining Berlin’s policy of hopeful hedging. But inside the country, some analysts are arguing it’s time to take a stance militarily.

The situation is emblematic for how disjointed Europe’s position continues to be on key defense issues, and how its biggest economic player is finding itself isolated, said Christian Mölling of the Berlin-based German Council on Foreign Relations.

“We have left a vacuum that the Americans are forced to fill once again,” he said.

Some suggest fears of China invading Taiwan in concert with a Russian invasion of Ukraine are unfounded and have been fueled by overheated rhetoric from both sides.

Retired U.S. Army Lt. Gen. Charles Hooper, who served as director of the Defense Security Cooperation Agency and defense attache in Beijing, said he sees simultaneous invasions of Ukraine and Taiwan as unlikely.

“I assess there’s always a probability of simultaneous crises, and honestly, I believe that the Chinese are watching this current situation very carefully. They will watch to see what [the] Russians do, watch the world react, internalize the lessons learned and then subsequently incorporate that into their own strategy,” Hooper said at a virtual event on Tuesday. “So, in other words, I don’t see things happening simultaneously.”

Even if the U.S. won’t commit troops to defend Ukraine, China should not — and likely will not — see that as a green light for China to invade Taiwan, said Ian Bremmer, president of political risk consultancy Eurasia Group. America has signaled Taiwan is off-limits through its new security pact with Australia and the U.K., the Quadrilateral Security Dialogue, its strengthened diplomacy with Taiwan and this week’s naval exercises with Japan, he argued.

“If anything, the takeaway the Chinese would get from everything over the last year is that America is focused on the areas they care about. Asia is the place they care about and China is the adversary they’re concerned about,” Bremmer said. “We’re both sending signals to each other there here are some fairly significant red lines we both have.”

Either way, the Chinese are sure to take good notes.

For one, leaders in Beijing are watching if the West can come together and put in place a “punishing sanctions regime” to deter further Russian attacks on Ukraine, said Brands. Such economic pressure would also be a key tool in managing an outright conflict with China.

In addition, they are likely watching the degree to which the crisis will tie up U.S. resources in a theater once considered quiet enough to allow the Pentagon to execute its fabled “pivot to Asia,” he added. “The more distracted the U.S. is, the better for China.”

The standoff in Europe once again drives home the idea the “enemy gets a vote,” as the U.S. military adage goes, raising the question of how America weighs its involvement in other crises around the world.

“We certainly have to prioritize those threats with the greatest risk to our national interests — but we are able to do more than one thing at a time,” said retired U.S. Army Gen. Joseph Votel, who previously commanded Central Command and Special Operations Command. “Not everything requires a large scale military response — we have to think more about the power of a compelling information campaign as well as smaller, tailored and sustainable efforts, including military forces, that address these threats.”

According to Brands, the pivot to Asia is not happening anytime soon unless U.S. leaders can come up with “clever” ways to reduce tensions in other regions like Europe. The old choice of either reducing the number of commitments or throwing more money at them remains as current as ever, he added.

Europeans, for their part, are very much attuned to that U.S. conundrum as they navigate the Russia crisis. Former President Donald Trump, with his mantra of “America First,” came close to pulling American troops out of Europe and leaving NATO altogether.

While President Joe Biden is an avowed trans-Atlanticist, that sentiment may not be guaranteed to last as an organizing principle of Washington’s foreign policy.

“American democracy is not doing well at the moment,” said Alexander Stubb, a former Finnish prime minister. He was speaking at a panel discussion in Brussels sponsored by the European Union Institute for Security Studies.

Howard Altman in Washington and The Associated Press contributed to this report.