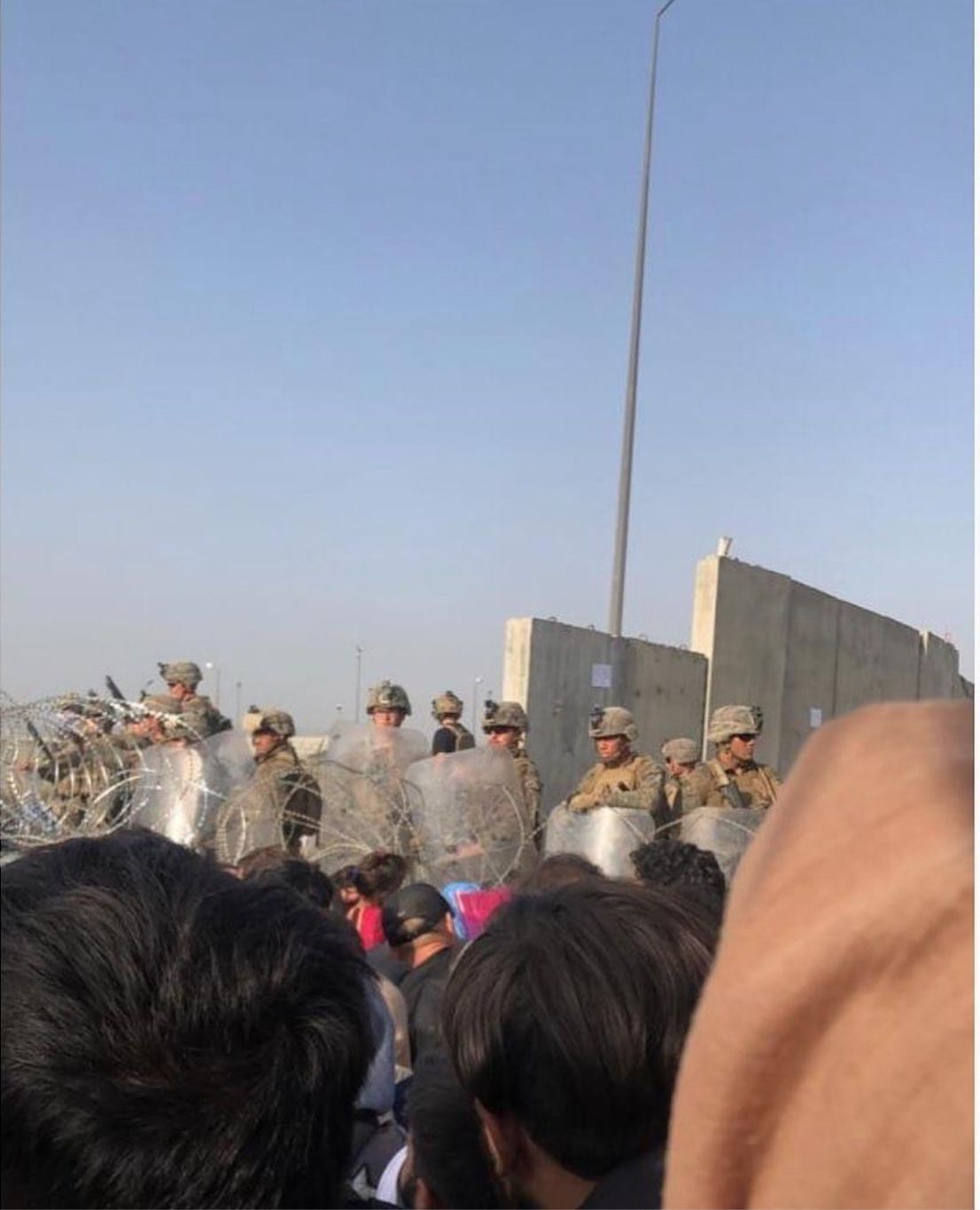 For a bunch of American citizens and Afghans seeking to flee the Taliban Friday morning, a harrowing journey to Hamid Karzai International Airport and possible freedom began with a morning text message update alerting the travelers of Taliban concentrations and the best route to the airport, according to a group working on getting people out of Kabul.

The airport, now the scene of America’s last stand in Afghanistan, closed once again overnight. Although the airfield is open again, the nearly eight-hour disruption in operations had a ripple effect, leading to chaos, punctuated by gunfire and tear gas, at gates to the airfield, according to Joe Saboe, a former Army infantry officer, whose group Team America has been working around the clock to assist evacuees.

Saboe was alerted to the harrowing scene at HKIA this morning around 12:30 p.m. Kabul time. A group, including at least one American citizen, which Saboe was “personally” directing toward a flight, ended up caught in a panic-stricken human wave generated from people fleeing the tear gas.

One evacuee, who is both an American citizen and a nurse, tried to treat the injured before retreating from the gates of HKIA to render aid to at least three children with broken bones.

The suspension of flights from HKIA, according to Saboe, led to a chain reaction that culminated in chaos. According to both Saboe and Defense Department officials, after the suspension, the airfield itself reached capacity, which in turn caused the gates to close. However, people did not stop approaching in attempts to flee the Taliban.

“There is no effective crowd filtration right now. What they have is crowd control,” Saboe told Military Times. “They’re tear-gassing U.S. citizens, U.S. green card holders, and people just 10 meters from the gate.”

However, multiple videos of the incident, sent to Military Times, depict a scene where the crowd panics while gunfire cracks over the crowd’s head and smoke wafts up from the ground.

“I cannot re-direct women and children back into a 3rd wave of tear gas and physical harm again,” reads another exchange sent to Military Times, this time between a Marine on the airfield and an advocate in the U.S. “There is absolutely no protection for them. I also don’t want to put you or your Marines at further risk.”

According to a former defense official, these kinds of personal connections, rather than the bureaucratic process, have been key in gaining access to HKIA. The official, who requested anonymity due to some members of their group still working in the national security community, stated that personally alerting service members on the ground was their most effective way of getting evacuees through the sea of evacuees flooding the gates at any given time.

With their personal connection on the lookout, this group had navigated a harrowing series of Taliban checkpoints in Kabul. Checkpoints where the Pentagon said today that Taliban are beating and intimidating some of those attempting to pass through.

They got as far as the gate before having to turn back.

“The last time we had about 2 meters from the gate,” another message sent to Military Times reads. “Gate closed and a woman stuck in the wires and filled with blood. Tear gas, gunshots are the normal way of life” at this gate. Military Times is withholding the location at the request of the sender out of security concerns.

“You guys tried from the core of your heart, but the guys on the ground really don’t pay attention,” the message from an evacuee stuck outside HKIA to an American attempting to help him out of the country reads. Even as resignation to his potential fate leaks into the text, the evacuee continues with heartfelt thanks to the American.

At a Pentagon press conference this afternoon, DoD stated that flights out of Afghanistan were halted temporarily due to the processing facility in Qatar hitting total capacity. According to the Pentagon, the evacuation has resumed.

“They can’t get them out quickly enough,” Joe Saboe said.

Saboe and “Team America” have been working around the clock for days to help an ever-growing list of Afghans and American citizens seeking an exit from Afghanistan. The informal group of veterans and defense officials initially began with a list of roughly 40 Americans and Afghans they were working on flying out. As of today, Saboe says they’ve managed to shepherd 75 successfully. While another 600 wait for a flight out.

“We got one through this last this last cycle because of what’s going on right now,” Saboe said.

Despite the challenges, Saboe and Team America remain steadfast in their efforts to help evacuate as many people as they can. To keep pace with the number of requests for assistance the organization receives, Team America brought on another 30 volunteers to keep their operation running 24 hours a day. Ultimately, Saboe believes both his organization and the country can meet the challenge of evacuating Kabul.

“We feel it’s a matter of will,” Saboe said. “This should not be insurmountable for the United States of America.”

James R. Webb is a rapid response reporter for Military Times. He served as a US Marine infantryman in Iraq. Additionally, he has worked as a Legislative Assistant in the US Senate and as an embedded photographer in Afghanistan.