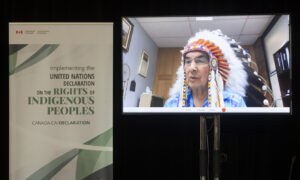 Experts on indigenous affairs voiced disapproval of a federal bill that would incorporate the United Nations Declaration on the Rights of Indigenous Peoples (UNDRIP) into Canadian law, saying it has neglected the economic developments which indigenous communities need to further pursue self-determination.

On Tuesday, the Liberals, NDP, and Bloc Quebecois had worked in concert to pass the third reading of Bill C-15 in the House of Commons, sending the bill to the Senate with a final vote of 210 to 118.

But as Bill C-15 moves to adopt UNDRIP, it’s sparked concerns about whether it’s giving the indigenous people a “veto” over all resource development projects. One central principle of the UNDRIP is the “free, prior and informed consent,” which establishes the need to include the consultation and participation of the indigenous population before undertaking resource development projects on their ancestral land.

Experts attending a Macdonald-Laurier Institute (MLI) webinar on Wednesday also expressed concerns that the bill would discourage the much-needed investment from entering indigenous communities, and thus limiting their economic development.

“It is reducing the competitiveness and deterring investment in Canada, in our resource development, because it is not clear how and when you can get resource projects done and approved,” MLI fellow Heather Exner-Pirot said.

In her latest paper, Exner-Pirot highlighted the fact that “Indigenous businesses are 40 times more likely than the average Canadian business to operate in the extractive sector.”

The paper also shows that the oil and gas sector offer the highest-paying jobs for indigenous people, paying roughly four times the average wage across all sectors.

Chris Sankey, a senior fellow at the MLI and former elected councillor for the Lax Kw’alaams Band, said that many indigenous leaders want their communities to stop relying on the government for funds to sustain their communities, but to do that they have to be able to generate their own wealth.

“I’m hoping that the intention is: get out of the way. Let us, let us live our lives, and let us build this sovereign wealth, so we can move our country forward together, and that’s what I’m hoping this bill is supposed to be about,” Sankey said.

“So far, what I’m concerned about is will this bill just be more leapfrogging than what it’s made out to be,” he added.

To adopt UNDRIP in a way that can better serve the interest of the indigenous people, Melissa Mbarki, MLI policy analyst and member of the Muskowekwan First Nation, suggested challenging certain sections in Bill C-15, such as to include clear definitions of what and who are “indigenous.”

Mbarki also suggested direct investments in reconciliation projects, such as the “Calls to Action” plans developed by the Truth and Reconciliation Commission of Canada, a now dissolved federal body. She said the TRC action plan provides a useful standard that can hold the government accountable, but added that it can be created without legislation such as Bill C-15.

Notably, the MLI webinar also touched upon how indigenous rights and resource development have been pitched against one another as two irreconcilable political and even partisan issues.

When asked how Canadians across the wide political spectrum can discuss Bill C-15 without creating animosity, Sankey noted that Canadians have lost the “art of critical thinking” and become afraid to express their opinions, particularly on indigenous issues and other racial topics.

“The one thing I really disagree with when somebody disagrees with an indigenous issue or [with] a person of color, automatically they are labelled as a bigot or a racist or some sort of person that’s going to do harm,” Sankey said.

Sen. Josh Hawley (R-Mo.) introduced an antitrust bill that would ban Amazon and Google from running an online marketplace and selling goods on that marketplace at the same time. “Big Tech companies like Google and […]

I am a little late to the ricotta party. For a long while, this Italian whey cheese has been relegated solely to lasagnas and other filled pasta dishes. Aside from that, ricotta has not played […]