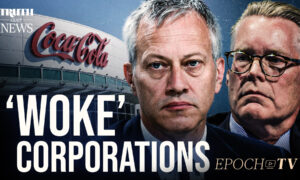 Corporate CEOs Are Fighting Against Election Transparency–What Is Driving Them?

America’s large corporations are now openly siding with the radical Left and aligning themselves against Middle America.

Tech companies have been doing this for some time, but now, other large corporations are following suit. In doing so, they’re stepping out of the realm of corporate activity and into the realm of political governance.

Corporate CEOs have claimed that Georgia’s new voting law was “unacceptable” and based on a lie. MLB announced that it was moving the All-Star Game out of Georgia.

But have these corporate giants even read Georgia’s law? And does the new law even have anything to do with their posturing? Or is there a larger agenda behind their activism?

We’ll discuss the latest actions from the newly “woke” corporate sector and look at the reasons behind their push into politics.

Truth Over News is hosted by Jeff Carlson & Hans Mahncke.

Vice President Mike Pence speaks during a discussion with local faith leaders to encourage them to resume in-person church services in a responsible fashion in response to the coronavirus pandemic, Friday, May 8, 2020, in […]

Are votes being compromised? | One America News Network

OAN NEWSROOMUPDATED 7:19 AM PT – Sunday, May 15, 2022 Many Americans are questioning if there are glitches in the current voting system. With mail-in ballots becoming the norm, many fear if the midterms will […]

In this screenshot from the DNCC’s livestream of the 2020 Democratic National Convention, Hunter Biden, son of Democratic presidential nominee Joe Biden, addresses the virtual convention on August 20, 2020. (Photo by Handout/DNCC via Getty […]