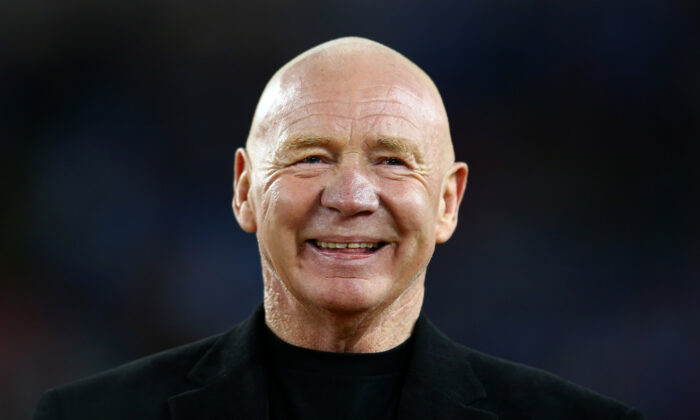 Former rugby league great and one of the rugby league Immortals, Bob Fulton, looks on at half-time during the 2012 NRL Grand Final match between the Melbourne Storm and the Canterbury Bulldogs at ANZ Stadium in Sydney, Australia, on Sept. 30, 2012. (Mark Kolbe/Getty Images)

SYDNEY—Bob Fulton, one of the most celebrated players in Australian rugby league and a former captain, coach and selector of the Kangaroos, has died. He was 73.

Fulton’s death was announced Sunday by his close friend, broadcaster Ray Hadley, on the Sydney radio station 2GB. A cause of death was not given.

Fulton coached Australia to World Cup wins in 1992 and 1995 and is the only man to have won a premiership and Ashes series, against England, as player, captain and coach.

Fulton was born in England but moved to Australia when he was four years old and became a towering figure in Australian rugby league. He was named as one of first four “Immortals” of the sport—along with Clive Churchill, Reg Gasnier and Johnny Raper—when the concept was launched as a sort of Hall of Fame in 1981.

He played in 35 tests for Australia—seven as captain—and 16 matches for New South Wales state, prior to the State of Origin competition.

Fulton also won three premierships in the National Rugby League in 1972, 1973 and 1976 while playing for Manly-Warringah—his last as captain. He appeared in 219 total matches with the team.

He later played for Eastern Suburbs in the NRL, a decision which disappointed Manly loyalists.

President Joe Biden told Israeli Prime Minister Benjamin Netanyahu that he wants a “significant de-escalation” in the fighting between Israel and Hamas by Wednesday, according to a White House readout. “The two leaders had a […]