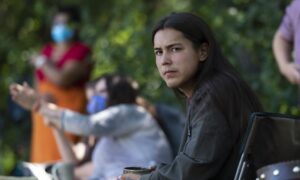 Last summer, a 24-year-old fiddle teacher walked more than 600 kilometres from his home in northern Saskatchewan to the legislature in Regina after a bill to address suicides was voted down a second time.

Tristen Durocher set up a teepee camp surrounded by photographs of people who had taken their own lives. He held a 44-day hunger strike—one day for every government legislature member who had voted against the private member’s bill.

He called his protest Walking With Our Angels.

When he heard that the bill had passed unanimously last month on the third try, he was “speechless and very excited.”

“I hope it’s helpful, beneficial and meaningful,” he said in an interview with The Canadian Press this week.

Durocher, who is from Air Ronge, Sask., said the support he received during his walk and hunger strike gave him a more optimistic outlook. It showed how communities can come together to show they care about mental health and meaningfully address issues related to suicide.

“There are times when I can get quite cynical, living in … remote places with limited access to health care, not a lot of socio-economic opportunity and a lot of dependency on unhealthy coping mechanisms to deal with the intergenerational trauma that has been inflicted on Indigenous populations,” he said.

“It got rid of my doom-and-gloomy outlook of ’nobody cares’ because they proved it wrong. They proved that they care.”

Doyle Vermette, an NDP Opposition MLA for Cumberland, first introduced the bill in 2018 and again in 2019. In both cases, the bill was voted down by members of the Saskatchewan Party government.

But on April 30th, it passed with unanimous support.

It requires the Ministry of Health and concerned interest groups to set up a suicide prevention strategy. The ministry will have to make suicide statistics and data on risk factors available, define the best ways to stop deaths by suicide, and promote jurisdictions to work together.

The government had brought in a suicide prevention plan called Pillars for Life in 2020, but Vermette said many people felt it didn’t go far enough.

Christopher Merasty, who joined and supported Durocher on his walk, said suicide prevention is deeply important to him. He said northern Saskatchewan remains under-resourced when it comes to mental-health supports.

“I was seeing and hearing a lot of loss—unnecessary loss—in the northern Saskatchewan area with many young kids, many men, many women taking their lives,” he said. “It’s very disheartening, very depressing. It’s almost like you’re seeing failures in the system when you see youth taking their own lives at such an early age.”

Preliminary data from the Saskatchewan Coroners Service says 187 people took their own lives in 2020 and 206 died by suicide the year before.

Durocher said he was inspired to see his activism taken up in broader political conversations.

“Walking With Our Angels happened right before an election, so it became part of the dialogue of people talking to politicians who were campaigning,” he said. “A lot of people called their MLAs and were able to show politicians that their own supporters wanted this and wanted to see action on this.”

Vermette said a great deal of work remains to be done—hashing out programs, where resources will go and how people will have access to them.

But the moment the bill passed is a milestone he won’t soon forget.

“We’ll have many days to argue about the different issues. But April 30 was for the Saskatchewan people, the families, those who wrote letters to give support or voice their concern, families who lost loved ones,” he said.

“Those are the true heroes.”

Alexei Navalny appears in a scene from “Navalny” an official selection of the U.S. Documentary section at the 2022 Sundance Film Festival. (Sundance Institute via AP) OAN NewsroomUPDATED 8:22 AM PT – Wednesday, January 26, […]

Rep. Elissa Slotkin (D-Mich.) and a bipartisan group of House lawmakers on Friday introduced a bill meant to make America’s critical systems more resilient against cyberattacks, as parts of the country continue to reel from […]