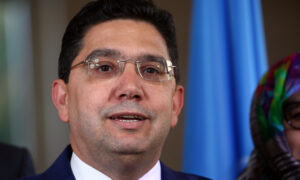 RABAT—Moroccan Foreign Minister Nasser Bourita on Thursday blamed Spain for the diplomatic spat between the two countries and said mass migrant crossings from Morocco into the Spanish enclave of Ceuta this week were due to the weather and tired border guards.

Morocco had appeared to loosen its border controls with Ceuta on Monday as thousands of migrants poured into the enclave, a move widely interpreted as retaliation for Spain’s hosting of a Western Sahara independence leader.

Speaking to Reuters, Spanish news agency Efe, and Moroccan news agency MAP in a briefing, Bourita warned that Rabat would take a more assertive stance than in the past, saying “today’s Morocco is not that of the past, and Spain needs to understand this.”

Rabat withdrew its ambassador to Madrid this week over Spain’s decision to hospitalise Polisario Front leader Brahim Ghali, letting him into the country with what Morocco said was an Algerian passport in a false name.

It would not return the ambassador “so long as the causes of the crisis persist,” Bourita said.

“If there is a problem or a crisis it is because Spain preferred to act and coordinate with the adversaries of Morocco against the feelings of the Moroccan people in relation to a fundamental issue for the kingdom,” he said.

Madrid has called the influx of migrants “a serious crisis for Spain and Europe” and Spanish Defence Minister Margarita Robles accused Morocco of blackmailing Spain over the border issue.

Bourita rejected that accusation and said the episode had shown that Morocco “carries the burden” of battling migration into Spain, with 20,000 security forces members deployed for the purpose.

He said the influx into Ceuta, the biggest in years, was not the first such incident and would not be the last. Fine weather made it easier to swim the small bay into the enclave and border guards were fatigued after the Eid al-Fitr holiday, he added.

“There is no change in Morocco’s land apparatus and nobody can cross via the land,” he said.

A Texas lawmaker has introduced a bill that seeks to impose a mandatory minimum sentence of 30 years in prison and sanctions for foreign actors who commit attacks on key U.S. infrastructure. Rep. Pat Fallon […]

Biden willing to shut down country to fight pandemic

Three Jewish House Democrats are calling on President Joe Biden to appoint an ambassador-at-large to combat anti-Semitism that has emerged in the United States in the wake of violence between Hamas and Israel this month. […]