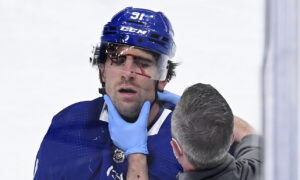 TORONTO—Toronto Maple Leafs captain John Tavares was discharged from the hospital Friday, one day after leaving the ice on a stretcher following a knee to his head.

Coach Sheldon Keefe said after practice that Tavares had a concussion and will be out indefinitely.

Tavares is under the supervision of team doctors. He said in a statement he is recovering at home and will be cheering for his team while looking forward to his return to the lineup.

He was hurt during a 2–1 loss to the Montreal Canadians on Thursday night in a first-round playoff opener. Game 2 is Saturday in Toronto.

The 30-year-old center crashed into Montreal’s Ben Chiarot 10:29 into the first period and was hit in the head by Corey Perry’s knee as he fell. Tavares gave a thumbs-up as he was wheeled off the ice.

He was kept overnight at St. Michael’s Hospital, where he was examined by the neurosurgical team and the club’s medical director.

‘Happy to know that everything’s looking on the ups, but definitely a moment where you know your mind races a little bit,” Maple Leafs forward Jason Spezza. “You think about his family and then having to watch that. Just seeing your buddy on the ice like that is scary moment.”

Canadiens forward Paul Byron called it a “huge relief” to hear Tavares was out of the hospital.

“It was hard to watch last night, honestly,” he said. “Such a great player, you never want to see that part of the game. It just kind of killed the mood in the rink. It took a little while to get going and I think everyone felt the same way.”

OAN NEWSROOM UPDATED 12:00 PM PT – Sunday, May 29, 2022 A Republican congressman sparred with the Education Secretary Miguel Cardona over the role of gender in the education system. One America’s Tom McGrath has […]

TOPSHOT – This aerial view shows cars lined up at the Dodger Stadium parking lot for Covid-19 testing with the downtown Los Angeles skyline in the distance, in Los Angeles, California, on November 14, 2020. […]

Joe Biden spoke before signing executive orders in the Oval Office of the White House in Washington, D.C., on January 28, 2021. (Photo by MANDEL NGAN/AFP via Getty Images) OAN NewsroomUPDATED 8:50 AM PT – […]