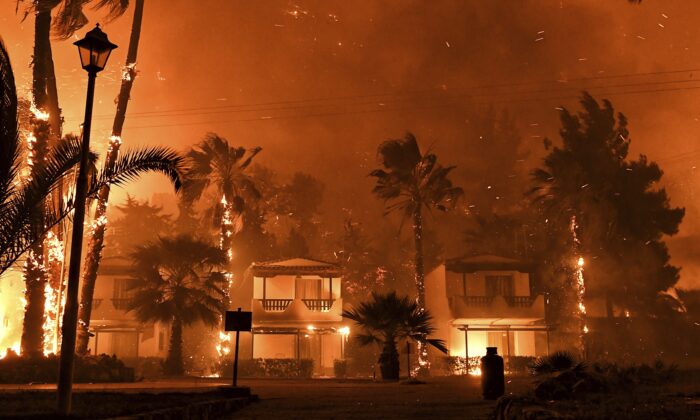 Fire burns among houses during a wildfire in the village of Schinos, near Corinth, Greece, on May 19, 2021. (Valerie Gache/AP Photo)

Fire Service officials said eight water-dropping planes and three helicopters were involved to try to contain the blaze some 70 kilometers (45 miles) west of Athens, outside the resort town of Loutraki.

No injuries were reported.

Russian President Vladimir Putin speaks during the summit with leaders of post-soviet countries of the Commonwealth of Independent States (CIS) in Astana on October 14, 2022. (Photo by Ramil SITDIKOV / SPUTNIK / AFP) (Photo […]

US President Joe Biden speaks to the press before boarding Marine One as he departs the White House in Washington, DC, on December 3, 2021. (Photo by ANDREW CABALLERO-REYNOLDS/AFP via Getty Images) OAN NewsroomUPDATED 8:50 […]