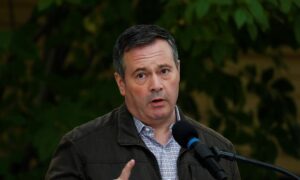 EDMONTON—Alberta Premier Jason Kenney is distancing himself from a decision to expel two members from his United Conservative caucus.

But he says the decision affirms confidence of the caucus in his leadership, and his government can’t be distracted right now by those with “personal agendas.”

Kenney made the comments this morning in an interview on CHED radio, one day after his caucus voted to turf backbench members Todd Loewen and Drew Barnes.

Loewen had called for Kenney to quit, saying the premier’s actions are dragging the party down to defeat in the next election, while Barnes has been highly critical of Kenney’s COVID-19 response.

Kenney says it was caucus members who voted to expel the members and that he was careful not to influence the proceedings.

Both Loewen and Barnes have said they will sit as Independents, and that the party under Kenney is no longer a grassroots-driven movement but a top-down one-man show.