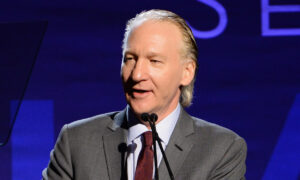 “He is fully vaccinated and as a result is asymptomatic and feels fine,” the statement reads.

It added that the Friday taping of the program had been cancelled and rescheduled at a later date. No other staff or crew members have tested positive for the virus.

“Thanks to all wishing me get well—hard to do since I feel perfectly fine, but I appreciate it!” Maher said in a Twitter post late Thursday. “Most upset about ending my streak going back to 1993 of never missing a Politically Incorrect or Real Time episode. Oh well, even Cal Ripken had to sit one out at some point.”

“Real Time with Bill Maher,” which premiered in 2003, is in its 19th season on the HBO television network. Maher had previously hosted a similar show called “Politically Incorrect,” originally on Comedy Central and later on ABC.

The Centers for Disease Control refers to COVID-19 cases that occur after a person is fully vaccinated as vaccine breakthrough cases.

“Vaccine breakthrough cases are expected,” the health agency said on its website. “COVID-19 vaccines are effective and are a critical tool to bring the pandemic under control. However, no vaccines are 100% effective at preventing illness. There will be a small percentage of people who are fully vaccinated who still get sick, are hospitalized, or die from COVID-19.”

It added, “There is some evidence that vaccination may make illness less severe.”

As of Thursday 8 p.m. ET, more than 118 million Americans have been fully vaccinated, amounting to about 35.8 percent of the population.

FILE – In this March 3, 2020 file photo, Federal Reserve Chair Jerome Powell speaks during a news conference to discuss an announcement from the Federal Open Market Committee, in Washington. (AP Photo/Jacquelyn […]

Sen. Manchin: Democrats turned their back on W.Va.