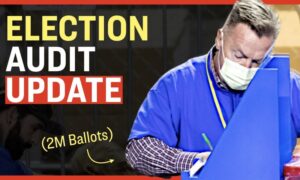 After the cyberattack on the Colonial Pipeline, gas stations in multiple states on the East Coast have run out of gas.

In Texas, left-wing activists blocked a highway in order to protest. However, the police appeared to only arrest a driver who came out to complain.

The situation in Hong Kong is getting worse. One of The Epoch Times’ reporters there was beaten by a man wielding an aluminum bat.

According to an official who’s overseeing the Arizona audit, only 13 percent of the ballots have been recounted thus far. So the audit will most certainly have to take a week-long pause this Friday.

Violence continues in Portland days after withdrawal of federal agents

The winner of the Kentucky Derby, Medina Spirit, was treated with an ointment that included betamethasone, said its trainer, Bob Baffert. Medina Spirit, a thoroughbred race horse, failed a post-derby drug test for the anti-inflammatory […]