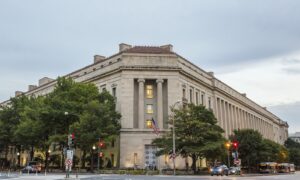 President Joe Biden over the past few months has added to his administration multiple officials from the Obama-era who had direct participation in “RussiaGate.”

The latest addition by the Biden administration is Susan Hennessey to the Department of Justice’s National Security Division.

Hennessey has been one of the primary promoters of Russia-collusion theories during her time at Lawfare, a blog affiliated with The Brookings Institution. Notably, her outlandish claims of collusion between the Trump campaign and Russia have consistently been proven wrong.

Prior to her new appointment as senior counsel for the DOJ’s national security division, Hennessey was the Executive Editor of Lawfare where she authored numerous anti-Trump articles. She also served as the General Counsel of the Lawfare Institute and is a Brookings Fellow.

Lawfare, essentially a Democrat activist group of lawyers led by Ben Wittes, was formed precisely for the purposes of weaponizing our laws to push the activists’ own agendas, with Trump often the target of their efforts.

Like so many leading promoters of the Trump-Russia collusion narrative, Hennessey had worked in the intelligence community earlier in her career. Before joining the Brookings Institution, Hennessey was an attorney in the Office of General Counsel of the National Security Agency.

On July 27, 2016, at the exact time that Steele’s Dossier and information regarding Papadopoulos’s conversation with Australia’s Alexander Downer was being transmitted to the FBI, Hennessey and Wittes co-authored an article titled “Is Trump a Russian Agent,” discussing if Trump could be subjected to a FISA surveillance.

Hennessey, along with Wittes, would remain focused on promoting allegations of Trump-Russia collusion for the next four years.

Hennessey was also routinely quoted in articles on Russia Collusion and was the single-source quote for an early influential article in McClatchy that was used to promote the theory that the intelligence community had evidence of Russia-collusion that went beyond the Steele Dossier—a statement that was later roundly disproven.

As a CNN analyst, she regularly espoused conspiracy theories, such as her claim that Trump’s son-in-law Jared Kushner was seeking a covert channel to Russia, using Russian communications equipment.

In advance of her new DOJ position, Hennessey deleted more than 39,000 tweets, however many have been archived. Her tweets showed the ongoing pattern of a partisan activist, who constantly pushed debunked Trump-Russia narratives and attacked anyone who disagreed.

Hennessey, along with Wittes, made outlandish excuses for FBI Director James Comey’s actions during the 2016 election, claiming that Comey had to make his public exoneration statement of Hillary Clinton to preempt Russian disinformation.

Of course, there was never any evidence for such a claim and, as we have since found out, Comey’s first exoneration of Clinton was written months before he read it out on live TV—and also before the FBI had even interviewed Hillary Clinton. Comey’s second exoneration concerned Anthony Weiner’s laptop, which had nothing to do with Russia.

Hennessey’s criticisms extended to many of Trump’s cabinet picks. When Trump nominated Rex Tillerson as Secretary of State, Hennessey indirectly claimed that he was effectively an agent of Russia.

After Trump became president, Hennessey stated that Rep. Devin Nunes (R-Calif.) lacked the requisite knowledge to be House Intelligence Committee chairman. It was Nunes, however, who uncovered the fact that the Clinton campaign had directly hired Christopher Steele and paid for his dossier.

Nunes, who issued a formal congressional memo detailing these abuses, was proven to be accurate while Hennessey was proven wrong.

Hennessey also promoted other Russia-collusion theorists and attempted to lend them credibility. She aligned herself with Rep. Adam Schiff (D-Calif), Nunes’ counterpart whose own Russiagate memo was riddled with falsehoods, and referred to him as extremely measured.

Carter Page, the Trump advisor who had his life turned upside down based on Steele’s lies, was a frequent focus of Hennessey, who claimed as late as December 2019 that Page’s rights were not affected as a result of the FISA warrants on him.

At least two of the Page FISA surveillance warrants applications have since been deemed to have been illegally obtained, and Page has never been charged with a crime.

When the DOJ Inspector General’s report on FISA abuses came out, detailing massive FBI abuses and condemning FBI leadership, Hennessey claimed Horowitz’s 478-page report was so insignificant that it did not even warrant a podcast.

When it became known that Obama officials had made hundreds of unmasking requests on members of the Trump campaign in the final months of his presidency, Hennessey claimed there was zero evidence of any abuses.

In some respects, Hennessey’s appointment to a senior position within the DOJ after years of promoting now-disproven conspiracy theories is a symptom of a larger problem with our government.

Top positions at Biden’s DOJ are now staffed by the very people who spent four years pushing Russia-Collusion narratives that were used to hamstrung the Trump administration and impaired the effectiveness of his presidency.

Lisa Monaco, Biden’s deputy attorney general, is now the de facto head of the DOJ, a position previously held by Rod Rosenstein. She somehow managed to sail under the radar during her confirmation process as her nomination was only opposed by two GOP senators, Sen. Ted Cruz (R-Texas) and Rand Paul (R-Ky.).

But Monaco, during the final months of the Obama administration, took the White House lead on the Intelligence Community Assessment, the report that was used to both legitimize and broadcast Steele’s salacious lies about Trump. The ICA was also used as the roadmap for Russia Collusion during the four years of the Trump presidency.

Like so many other members of the Obama Administration, Monaco went on to work for CNN, where she frequently pushed Russia collusion narratives.

And like so many other promoters of Russia Collusion, Monaco also had previous ties to the nation’s intelligence community. Prior to joining the Obama Administration, she was Robert Mueller’s Chief of Staff at the FBI and also worked closely with Mueller and prosecutor Andrew Weissmann on the Enron Task Force.

During her post-Obama years, Monaco also contributed to Lawfare, the Brookings outlet which, as the name suggests, prides itself on weaponizing the law.

Lawfare is known not only for advancing Democrat talking points but also for actively making legal recommendations (including to the FBI) through their articles which are often later picked up by various Democrat interests groups—apparently including a federal judge.

During the saga involving Trump’s former national security adviser, retired Lt. Gen. Michael Flynn, many of Lawfare’s talking points appear to have been used by Judge Emmet Sullivan in his quest to extend Flynn’s trial—even after the DOJ dropped their case.

Lawfare has also served as something of a half-way house for former  FBI leadership—with former FBI Director James Comey acting as a contributor and James Baker, the former top legal counsel for the FBI, joining both Lawfare and the Brookings Institution. Wittes has long held a friendship with Comey and was the conduit for Comey’s memos to the New York Times in 2017.

Bill Clinton’s college roommate, Strobe Talbot, who was the president of Brookings Institution from 2002 to 2017, was one of the first known recipients of the Steele dossier. Hennessey later admitted that, while she was at Brookings, she was given an advance copy of the dossier.

Another Brookings alumni is Fiona Hill, the Democrat’s star impeachment witness during the first impeachment of President Trump. Hill is an old friend of Christopher Steele’s and was responsible for introducing Igor Danchenko to Steele.

Danchenko, who served as Steele’s primary sub-source, went from years of working for Brookings to later becoming Steele’s main source for the dossier, feeding Steele gossip from his childhood friends in Russia, which Steele would then use to construct fantastical stories used in his dossier.

While Steele’s stories have been proven to be false—and Danchenko has disavowed details in Steele’s dossier—it remains remarkable that these individuals were so deeply enmeshed with the same Brookings Institution that Biden is now drawing his staff from.

Brookings efforts didn’t end with the dossier. Less than six months after Mueller’s appointment—on Oct. 10, 2017—the Brookings Institution published the first of two reports titled “Presidential Obstruction of Justice: The Case of Donald J. Trump,” which outlined, among other things, a scenario wherein Mueller would refer his obstruction findings to Congress, which would then take up the matter and continue investigating.

The Brookings report also discussed ways in which Congress could impeach President Trump, mentioning the word “impeachment” a total of 90 times.

Norman Eisen and Barry Berke, two of the authors of the Brookings report, were later retained by House Judiciary Committee Chairman Rep. Jerry Nadler (D-N.Y.) on a consulting basis as special oversight counsel to the Democrat majority staff.

As Nadler noted, the two men would have a particular focus on reviewing Mueller’s investigation and would be advising the committee. It also appears Nadler intended for the two lawyers to question Attorney General William Barr.

Biden himself recently relied on a Brookings study to promote his economic program, claiming that the Institution was non-partisan.

Brookings, however, is anything but non-partisan. Brookings associates spent four years pulling out all the stops to derail Trump, most visibly by ceaselessly advocating the Russia collusion narrative and now they appear to have been rewarded with top positions in the Biden administration.

It is deeply troubling that Brookings alumni Hennessey and Brookings contributor Monaco, both of whom were deeply entangled in promoting the Russia collusion hoax, now have enormously influential positions in the Department of Justice.

The sanctity and integrity of our Justice Department should be one of the most important goals of any administration—regardless of political affiliation.

Jeff Carlson is a regular contributor to The Epoch Times. He is a CFA® Charterholder and worked for 20 years as an analyst and portfolio manager in the high-yield bond market. He also runs the website TheMarketsWork.com and can be followed on Twitter @themarketswork.

Hans Mahncke, Ph.D. is a lecturer, author, and general counsel at a global investment advisory firm.

Former President Donald Trump plans to hold rallies in a handful of states, he said in a newly released interview. Trump, who has teased future rallies since leaving office, told One America News that he […]

PayPal Holdings Inc said on Wednesday it plans to allow users to withdraw cryptocurrency to third party wallets. The San Jose, California-based company, which opened its platform to digital currencies last October, at present does […]