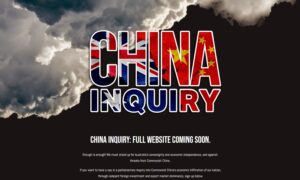 Coercive economic policy is one of the key means of the Chinese Communist Party’s (CCP’s) presumptuous diplomacy style. Take a look at the foreign ministers’ meeting at G7 on May 5, when it criticized the CCP for “arbitrary, coercive, economic policies and practices.” The next day, the CCP’s National Development & Reform Commission (NDRC) issued a statement on its indefinite suspension of all activities under the China-Australia Strategic Economic Dialogue, stepping up its economic coercion of Australia to a whole new level since 2020.

Seemingly, the CCP has great favorable conditions for its retaliation against Australia. Firstly, based on the Australian Bureau of Statistics, from 2009 to 2010, China surpassed Japan, becoming Australia’s main export country. In the four-year period from 2014 to 2015 and 2019 to 2020, the value of Australia’s exports to China had doubled, an increase from $59 billion to $118 billion (A$75 billion to A$150 billion). Currently, China is Australia’s largest trading partner in import and export. In 2020, the total barter trade between China and Australia was $181 billion (A$230 billion), accounting for 35 percent of Australia’s total foreign trade and 12.5 percent of Australia’s GDP.

Furthermore, David Uren, an economics editor, once wrote to the Australian Strategic Policy Institute, “Australia has no realistic alternative market to China for a third of its exports and no viable source but China for almost a fifth of its imports.” In other words, the Australian economy has built a certain degree of dependence on China. Precisely due to the asymmetry in the Sino-Australian trade relationship, the CCP triumphantly imposes economic coercion on Australia. Since May 2020, the export of Australian barley, beef, copper, sugar, lobster, timber, coal, bottled wine, and other products has been halted or sanctioned by the CCP’s Ministry of Commerce.

The CCP thinks that it holds all the cards. Even Hu Xijin, the editor-in-chief of Global Times, a CCP mouthpiece, once said that Australia is just a piece of chewing gum stuck on the sole of China’s shoe. Australia’s The Sydney Morning Herald reported on Nov. 18, 2020, that a CCP official spoke at a Canberra briefing about a document of grievances that had been handed over to the media by the CCP’s embassy in Canberra. The document listed 14 acts by the Australian government that caused dissatisfaction in the CCP, including the decision made in 2018 to ban Huawei from participating in 5G tenders, not recognizing the CCP’s claims in the South China Sea, and the “incessant wanton interference in China’s Xinjiang, Hong Kong, and Taiwan affairs,” among other complaints.

Clearly, the CCP’s use of economic coercion against Australia goes far beyond the economic scope, and it aims to make Australia fully give in to the CCP. This has also been a pivotal strategic goal of the CCP’s “Periphery Diplomacy Strategy” over the recent years.

However, facts have proven that the CCP has once again overestimated itself and its coercive acts against the Australian economy have literally failed.

First of all, the CCP’s sanctions have had very little impact on China-Australia barter trade in general, but they hurt China itself.

Consider the different types of exports from Australia to China: the export of food and beverage products such as lobster, sugar, and wine has shown a relatively obvious downward trend; and the export of raw materials such as coal, copper, and logs has a V-shaped distribution. Iron ore is relatively special. In 2020, exports of iron ore to China saw an increase of 7 percent, and export documents have shown a rise by 9 percent, leading to a 15 percent increase in total exports to China.

Data released by the Australian Bureau of Statistics (ABS) shows a 2.16 percent drop in Australia’s total exports to China, a limited reduction despite the pandemic and China’s sanctions and considering the uptick in iron ore exports. Data released by the ABS on Jan. 25 shows Australia’s total exports to China reached $114 billion (A$145 billion) in 2020, slightly down from $116 billion (A$148 billion) in 2019. However, this is Australia’s 2nd highest total export value next to 2019 since ABS started officially recording China-Australia trade data in 1988.

Meanwhile, Australia has been actively seeking market diversification, so those products greatly affected by the CCP’s sanctions have gradually found alternative markets, offsetting the impact of the loss in the Chinese market and now restoring the overall export value. For instance, Australia’s barley exports to China fell from $130 million in April 2020 to $64 million a month later, which led to a 40 percent total fall from its original global barley exports that month; but in February 2021, the global export volume of Australian barley rebounded to $190 million, higher than the amount before the CCP imposed tariffs. Another example is that the total global export volume of Australian coal remained basically stable. Although coal exports to China decreased from $1.1 billion in May 2020 to $22 million in February 2021, exports to Japan, South Korea, and India had increased.

Australia’s total exports decreased by 7 percent in the second quarter of 2020, but imports also saw a decrease of 5 percent, and the annual GDP growth rate was 1.1 percent. It experienced its first economic recession in about three decades, the cause of which derived from the pandemic more so than the CCP’s sanctions. Moreover, according to data published by the ABS on March 3, the Australian economy grew by 3.4 percent and 3.1 percent respectively in the third and fourth quarters of 2020, making two consecutive quarters of growth over 3 percent in more than six decades, indicating that the Australian economy bounced back from its recession relatively quickly.

On the other hand, the CCP’s sanctions on Australia have led to surges in prices and rising costs in mainland China. For example, the price for fodder with barley rarely exceeded that of wheat, the price of beef has soared by around 50 percent, and the price of other foods has also greatly risen correspondingly. The price of cotton yarn has gone up by 30 percent, followed by the rising price of clothing in the first quarter of 2021, and the purchasing cost for coal-fired power companies across China increased by nearly $7 billion. In the winter of 2020, power outages and cuts were seen across the country. Public opinion believed that this was related to the ban on Australian coal. The CCP’s sanctions on Australia bounced back to hurt itself.

Second, facing the economic coercion from the CCP, Australia has not only stood up to it, but also has become more and more dauntless.

Australia-China political relations have reversed since 2017. In 2018, Huawei was banned from participating in the construction of Australia’s 5G network. In 2020, Australia led the push for an investigation into the virus source of the Wuhan pneumonia, which annoyed the CCP. So it openly imposed economic coercion on Australia (a trade ban on Australia’s exports to China exceeding $20 billion in value or increasing tariffs). However, Australia did not back down as the CCP wished. Instead, it kept making countermoves to the CCP’s imposed sanctions.

The following are some recent examples:

First, on April 21, 2021, the Belt and Road agreement signed between the Australian State of Victoria and the CCP in October 2019 was terminated. James Laurenceson, Director of the Australia-China Relations Institute at the University of Technology, Sydney, believed that Canberra was determined to fight back.

Second, a review has begun to reconsider a lease agreement with China’s Landbridge Group for the Darwin Port (in 2015, the Northern Territory (NT) government of Australia leased Darwin Port to the Chinese company for 99 years at $397 million (A$506 million)), reevaluating whether to compulsorily make the Chinese company waive the right to lease.

According to a report from The Australian, Landbridge Infrastructure Australia, founded by China to lease port infrastructure from the NT government, has not achieved its annual profits and lost $36 million (A$44.5 million) last year, its largest annual loss to date. Australian media speculated why Landbridge Group acquired the lease at a cost of over $392 million (A$500 million) and was willing to endure a loss of over $24 million (A$30 million) each year. What are the important strategic considerations for the deal? In fact, Darwin Port is one of the four major U.S. military bases in the Indo-Pacific region, and the United States has always opposed this lease.

On May 3, the Australian federal Labor party described the Port of Darwin as a “critical strategic asset for Australia,” being under “effective foreign ownership.”

Third, Australia is already preparing for a military conflict in the Taiwan Strait. In an interview with the Australian Broadcasting Corp. in late April, the Australian Defense Minister Peter Dutton said that a conflict with China over Taiwan “should not be discounted.” Mike Pezzullo, Secretary of the Australian Department of Home Affairs, said in an Anzac Day message to staff, that the “drums of war beat … more loudly and ever closer.” Australia must strive to reduce the likelihood of war “but not at the cost of our precious liberty.” He also said, “War might well be folly, but the greater folly is to wish away the curse by refusing to give it thought and attention, as if in so doing, war might leave us be, forgetting us perhaps.”

On the surface, the CCP’s economic coercion against Australia has at least three advantages:

However, the CCP’s imposed sanction did not create many advantages for China, to the surprise of many. In fact, on the other hand, the CCP was being cautious about its coercion against Australia’s economy, leaving some space for things to turn around.

Take this statement from the CCP’s National Development and Reform Commission, “to indefinitely suspend all activities under the framework of the China-Australia Strategic Economic Dialogue,” as an example. It says “suspend” rather than “terminate” and is “indefinite” but can be resumed at any time, depending on what the Australian Federal government does. That means the CCP has ulterior motives for suspending rather than terminating—the CCP was trying to save its own face.

Based on Australia’s response to the CCP’s economic coercion, the international community can make two valuable conclusions:

First, economic relations between the two countries are interdependent. Although the strength and status of the two countries may be very different, there is no need to be concerned over their strengths and shortfalls.

Second, the CCP is playing hardball on the outside while inner struggles have reached a peak; it’s attacking the weak and steering away from the strong. Even a medium-sized or a small country, using wisdom, can victoriously defend its own rights and interests.

To summarize the two experiences in one sentence, just like a popular saying goes: “We have nothing to fear but fear itself.”

Wang He has master’s degrees in law and history, with a focus on the international communist movement. He was a university lecturer and an executive of a large private company in China. He was imprisoned in China twice for his beliefs. Wang lives in North America now and has published commentaries on China’s current affairs and politics since 2017.

The Federal Bureau of Investigation (FBI) has launched an investigation into alleged illegal contributions to Sen. Susan Collins’s (R-Maine) 2020 re-election bid, according to a recently unsealed search warrant application. According to the warrant, first […]

Four new COVID-19 cases have been uncovered among a family in Melbourne’s north, sparking a search for the source of the outbreak. Health Minister Martin Foley confirmed two more people had returned positive coronavirus test […]