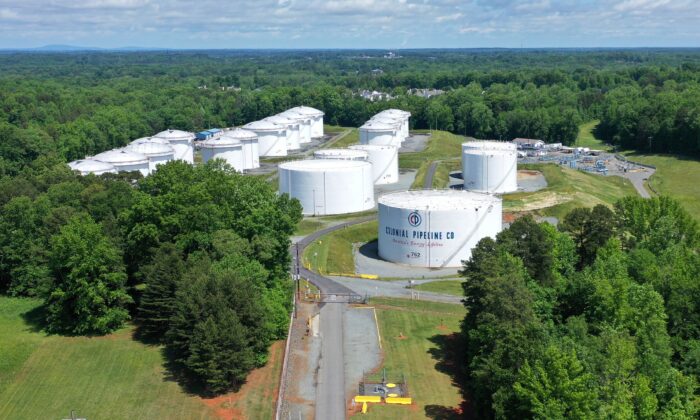 Holding tanks are seen in an aerial photograph at Colonial Pipeline’s Charlotte Tank Farm in Charlotte, N.C., on May 10, 2021. (Drone Base/Reuters)

Colonial Pipeline’s corporate website was back online on Tuesday after a temporary service disruption unrelated to the ransomware cyberattack against the U.S. energy company, it said on Twitter.

The website started experiencing interruptions by Monday night and then went down for more than 10 hours as the operator of the largest fuel pipeline in the United States deals with a cybersecurity attack that shut its entire network on Friday.

The Alpharetta, Georgia-based company said it was continuing to make progress on its system restart plan.

Colonial’s 5,500-mile pipeline network carries nearly half the fuel consumed along the U.S. East Coast. It has restarted some smaller lines.

By Swati Verma and Eileen Soreng

Hong Kong’s ‘Iron Lady’ Emily Lau: ‘The Game Is Not Over’ [Premiere 05/13 at 7pm ET] In Hong Kong, pro-democracy activists are being rounded up, journalists are being attacked, and the election system has been […]

A Los Angeles-based human trafficking and child exploitation task force has rescued three teenagers and arrested nearly a dozen people during a multi-day operation in Pomona, authorities said. “Two females who appeared to be very […]