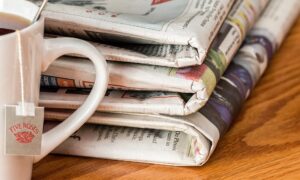 Many Americans are waking up to the fact that our media ecosystem is not giving us an honest, balanced view. Instead of objective journalism that just gives us the facts and lets us decide what we think for ourselves, we’re increasingly subjected to partisan spin, slant, sensationalism, and other types of media bias that give us a false or distorted sense of reality.

This is especially pernicious when it comes to political journalism and coverage of controversial events. From Black Lives Matter to the coronavirus to the election, Americans who read news inside a one-sided filter bubble will not get the full story nor the full scope of information that they need to make their own decisions and think for themselves about these issues.

In a democratic republic, media bias is one of the most important tools in the arsenal of powerful partisan interests. Biased media narratives can cause you to think, vote, buy, and behave in certain ways. If we’re not careful, our thinking and behavior will be rooted not in objective reality and the highest moral good, but rather, in serving the interests of powerful political, business, and financial groups.

More often than not, media outlets operate as one-sided distortion machines that serve an agenda. Americans need to become aware of this if they want to avoid being manipulated.

But the answer to media distortion, media bias, and misinformation isn’t to censor or oppress voices. Sometimes the truth is wildly unpopular, hidden, or suppressed. In order to develop a bulwark against a media ecosystem that’s often trying to manipulate us, Americans ought to develop strong critical thinking skills and an eye for media bias.

One of the first steps to becoming aware of media bias is to broaden the scope of our news consumption. Websites like AllSides provide media bias ratings and a balanced newsfeed so that Americans can compare coverage of the very same stories and topics across the political spectrum.

By seeing what information some media outlets are focusing on and what others are ignoring, or how headlines are framed in vastly different ways, Americans can get a better sense of that outlet’s political and cultural agenda—and truly decide for themselves what they think. Reading across the political spectrum also exposes us to multiple perspectives, including information, opinions, and analysis that we would not get from a one-sided media diet.

By comparing coverage, we can also begin to notice different types of media bias, such as sensationalism, spin, slant, and opinion statements presented as fact.

Spin is when a journalist uses vague or dramatic language and strays from objective, measurable fact. They may downplay, ignore, or omit alternative perspectives or information in order to paint a certain picture. Some keywords can tip us off to media bias by spin. Journalists will say something “emerged,” there was an “admission,” or something “came to light”—this makes you believe something bad happened, even if other information may reveal that’s not the case. Or, they will say someone “raged,” “went on a tirade,” “boasted,” or is “facing calls to …” in order to spin a picture of the subject as angry, guilty, or bad.

Often, journalists substitute spin words and phrases for the word “said.” Instead of quoting a source and noting that they simply “said” or “told reporters” something and letting us decide what we think about the quote for ourselves, journalists will use words that imply guilt, such as “refuses to say,” “admitted,” “dodged,” or “conceded.”

Differences in word choice on controversial topics can also clue us in to a media outlet’s agenda. For example, while one media outlet may refer to “reproductive choice,” another will refer to abortion. While one outlet speaks of “gun control measures,” another notes an “attack on gun rights.” One speaks of “gender-affirming care” for transgender individuals, and another of “hormone treatments.”

But one of the most common types of media bias today is when journalists insert qualifying adjectives into writing that is meant to be objective. While some adjectives can be verified through observation—a “lengthy bill,” “lone objector,” or “statistically significant”—other qualifiers are a matter of interpretation. Consider phrases such as “peaceful protest,” “offensive mascot,” “dangerous suggestion,” “harmful proposal,” “baseless claim” or “debunked theory.” People often disagree wildly on whether or not such qualifiers are true. While one person may think a claim is baseless or debunked, another may argue there’s merit for it. While one person may say something is dangerous or harmful, another may argue it’s safe or necessary. And while someone may say a protest was peaceful, another would argue there was too much violence at the event to warrant such a qualifier.

When journalists insert subjective adjectives into their writing without labeling it as opinion content, it’s a way to manipulate you into a certain view. It’s often an attempt to sway the reader toward embracing a specific picture of reality—even if that picture is distorted, debatable, or untrue.

As powerful partisan interests continue to wrangle for control of America, Americans should work on developing a critical eye for media bias. Freedom requires the ability to think for ourselves in order to exercise sound judgment, not blindly swallow whatever we’re told. We can become aware of the ways that information is used to distort the truth by reading across the spectrum and learning to spot media bias as our bulwark against manipulation.

Julie Mastrine is a writer and the director of marketing at AllSides. She also writes at Evie Magazine.

Elon Musk: Tesla self-driving is safer for all

Sister of Josh Duggar charged with endangering child in Ark.

State lawmakers fight to amend Constitution with convention of states

WASHINGTON, DC – DECEMBER 17: A copy of the U.S. Constitution is propped up in front of the desk of Rep. Alcee Hastings (D-FL) during a House Rules Committee hearing on the impeachment against President […]