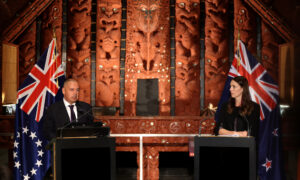 New Zealand (NZ) will open its borders further in a fortnight, green-lighting quarantine-free travel to and from the Cook Islands from May 17.

The NZ-aligned Pacific nation has been in negotiations for a travel bubble arrangement with Prime Minister Jacinda Ardern’s government for months.

The move follows NZ’s opening to Australia two weeks ago.

“It will mean families can reconnect, commercial arrangements can resume and Kiwis can take a much-welcomed winter break and support the Cook Islands’ tourism sector and recovery,” the prime minister said.

The arrangement falls short of free movement between Australia, NZ, and the Cook Islands.

Travellers from Australia hoping to take a break in the Pacific paradise will need to spend 14 days in NZ before onward travel to Rarotonga.

Ardern said she would have no objection to a true triangular arrangement, but it would be a matter for the Cook Islands government on whether they would open to Australia without the NZ stay.

NZ is also funding and supporting the rollout of vaccine to the approximately 15,000 adult Cook Islanders beginning this month.

It will mean NZ is likely to complete a COVID-19 vaccination of another country before its own rollout is completed.

Ardern said the practicalities of shipping, storing, and administering vaccine in the Pacific meant it would be sensible to do it quickly.

“We’re trying to act equitably but we’ve also got to do what makes good logistical sense,” she said.

The Cook Islands is deeply dependent on tourism and Ardern acknowledged it has been eager to re-open to NZ for some time.

“Such a big part of their economy has been tourism and New Zealanders make up a large part of that,” she said.

“We wanted to make sure when we did it, we got it right. We don’t want to run the risk of exporting COVID to the Cook Islands which has been COVID-free.

“The delay has not been anything to do with the Cooks but more making sure we are prepared in the event in which we have a case that crosses the border into the Cook Islands.”

Given its COVID-free status, Cook Islanders have been allowed to enter NZ without a fortnight-long stay in quarantine since January.

May 6, 2021 Eric Felten, RealClearInvestigations US 0

On Monday, April 19, Edgar Luis Tirado went on a one-man crime spree—important details of which are not recorded in the Washington Post’s often cited “Fatal Force” database of killings by police. Other accounts, though, […]