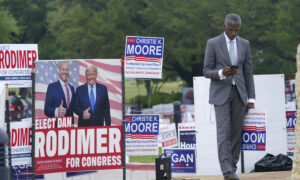 The widow of a U.S. representative who died earlier this year has advanced to a runoff in the race to fill the seat he held.

Susan Wright received enough votes to advance to the runoff, getting 19.2 percent of the tally.

Wright entered the race following the death of Rep. Ron Wright (R-Texas), who died after testing positive for COVID-19 in February.

Trump endorsed Wright last week, telling supporters that she “will be strong on the Border, Crime, Pro-Life, our brave Military and Vets, and will ALWAYS protect your Second Amendment.”

Trump said Wright would be “a terrific Congresswoman.”

Either Republican candidate Jake Ellzey or Democrat Jana Sanchez will join Wright in the runoff. Ellzey had garnered 354 more votes with virtually all precincts reporting, according to the tally early Sunday.

A runoff is triggered when no candidate gets a majority of the vote.

The race to fill the vacant seat representing the Texas 6th Congressional District drew 23 candidates. Each one drew at least 102 votes.

Republican Brian Harrison was in fourth with 8,476 votes, while Democrat Shawn Lassiter garnered just under 7,000.

The seat has been held by Republicans for decades, but Democrats hoped to flip it after Trump drew a smaller margin of votes in the district in 2020 than in 2016.

Democrats have seen their majority in the House of Representatives dwindle considerably, after Republicans flipped 15 seats in the lower chamber in the 2020 election.

Republican Julia Letlow, whose husband died before being sworn into Congress, recently won the seat he would have held. After she was sworn in, the House stood at 218 Democrats and 212 Republicans, with five seats vacant.

But Troy Carter, a Democrat, last week won the special runoff election for a seat vacated by former Rep. Cedric Richmond (D-La.). Once he is sworn in, Democrats will see their edge grow.

U.S. Secretary of State Antony Blinken appears on a television screen as he testifies virtually on the U.S. withdrawal from Afghanistan during a House Foreign Affairs Committee hearing on Capitol Hill in Washington, D.C. (Photo […]

Young minors spoke to an agent outside at a pod in the Donna Department of Homeland Security holding facility, the main detention center for unaccompanied children in the Rio Grande Valley run by the U.S. […]