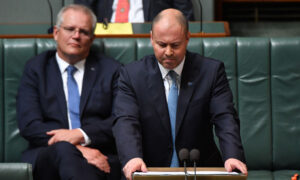 Australia’s income tax burden among OECD countries is the third-highest in the world, just behind Denmark and Iceland, according to a report by the Organisation for Economic Co-operation and Development (OECD).

The report published on April 29 comes as Treasurer Josh Frydenberg delivered his pre-budget speech in which he outlined the nation’s focus on job creation and reducing employment.

According to the OECD, Australia was approximately 10 percentage points higher than the 37 countries in the OECD, reported The Australian.

The report also found the average tax rate for a married worker with two children was 16.1 percent in 2020—the 15th highest in the OECD than the OECD average of 12.9 percent.

According to Bob Breunig, director of the Tax and Transfer Policy Institute at the Australian National University, Australia’s heavy reliance on corporate and income tax revenue had “negative consequences for growth and prosperity.”

“Large-scale tax reform is currently not on the agenda, but it will have to be,” Professor Breunig told The Australian. “With the debt we now have, we can’t afford to just take our current system and lift all the rates.”

The Australian says that Frydenberg will announce on budget night the one-off low-and-middle-income tax offset be extended one year to 2021-2022.

In his pre-budget speech on April 29, Frydenberg said Australia remains in the first phase of the economic and fiscal strategy due to century-low population growth, international border closure, close to zero interest rate, and the economic impacts brought by the COVID-19 pandemic.

“We will not move to the second phase of the fiscal strategy until we are confident that we have secured the economic recovery,” he added.

While business leaders have called on the treasurer to bring forward stage three of the government’s personal income tax cuts—a 30 percent tax rate on all income earned between $45,000 and $200,000, and 45 percent for amounts higher—Treasurer Josh Frydenberg said long-term unemployment will now be avoided for another generation due to the nation’s rapid recovery in the labour market.

“COVID-19 has had an unprecedented impact on our levels of government debt, as it has all around the world, but using the government’s balance sheet to limit the economic cost and the longer-term scarring of the labour market stemming from this crisis was a responsible and a prudent decision.
It was the fiscally responsible course of action,” he said on Thursday.

“This will be another pandemic budget being delivered in the midst of a once in a 100-year pandemic.”

Jennifer Westacott from Business Council of Australia told The Australian that bringing forward stage three of the government’s personal income tax cuts would be “good for workers, good for businesses and good for the economy.”

But Cassandra Goldie from the Australian Council of Social Service argues that bringing forward stage three of the income tax cuts would not help people on low incomes and result in a lack of investment in essential services into the future.

“We can provide quality ser­vices, such as disability and health services, by ensuring our tax system is fair,” Goldie told The Australian, adding that dropping high-end income tax cut would see “tens of thousands of dollars more go to people earning hundreds of thousands.”

Unemployment currently sits at 5.6 percent, and economists and the Treasury have been keeping an eye for an upwards spike after the JobKeeper wage subsidy ended last month. However, Frydenberg said the number of people on income support has actually fallen by around 46,000.

“While this is encouraging, we are not complacent,” he said. “We recognise that the COVID-19 pandemic is far from over, and we know that some businesses and sectors are still doing it tough.”

The budget is due for release on May 11.

Rebecca Zhu contributed to this report.

MADRID—A Spanish man with COVID-19 symptoms who coughed on work colleagues and told them “I’m going to give you all the coronavirus” has been charged with intentionally causing injury after allegedly infecting 22 people. Spanish […]