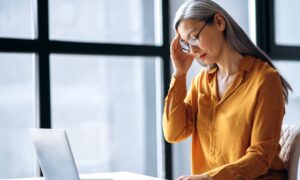 Women report feeling more exhausted than men do after video calls, according to the first large-scale study on Zoom fatigue.

The researchers say the “self-view” display may be to blame for that exhausted feeling after a day of back-to-back online meetings.

The research shows that overall, 1 in 7 women—13.8 percent—compared with 1 in 20 men—5.5 percent—reported feeling “very” to “extremely” fatigued after Zoom calls.

These new findings build on a paper the same researchers recently published in the journal Technology, Mind and Behavior that explored why people might feel exhausted following video conference calls. Now, they have the data to show who is feeling the strain. For their follow-up study, the researchers surveyed 10,322 participants in February and March using their “Zoom Exhaustion and Fatigue Scale” to better understand the individual differences of burnout from the extended use of video conferencing technologies during the past year.

These findings add to a growing understanding of how the COVID-19 pandemic is disproportionately affecting certain groups of people, said Jeffrey Hancock, professor of communication at Stanford University and co-author of the new paper, available online via the Social Science Research Network.

“We’ve all heard stories about Zoom fatigue and anecdotal evidence that women are affected more, but now we have quantitative data that Zoom fatigue is worse for women, and more importantly, we know why,” Hancock said.

The researchers found that what contributed most to the feeling of exhaustion among women was an increase in what social psychologists describe as “self-focused attention” triggered by the self-view in video conferencing.

“Self-focused attention refers to a heightened awareness of how one comes across or how one appears in a conversation,” Hancock said.

The researchers found that women answered these questions at higher rates than men—a finding that is consistent with existing research that shows women have a greater propensity to self-focus than men when they are in the presence of a mirror. That prolonged self-focus can produce negative emotions, or what the researchers call “mirror anxiety,” Hancock explains.

A simple solution may be to change the default display settings and turn off “self-view.”

Could This Have Been an Email?

Also contributing to an increase in Zoom fatigue among women were feelings of being physically trapped by the need to stay centered in the camera’s field of view. Unlike face-to-face meetings where people can move around, pace, or stretch, video conferencing limits movement. Another way to address this is to move farther away from the screen or to turn off one’s video during parts of calls.

The researchers found that while women have the same number of meetings per day as men, their meetings tend to run longer. Women were also less likely to take breaks between meetings—all factors that contributed to increased weariness.

The pattern of women being more burned out from videoconferencing than men appears to be robust. “We see this gender effect across multiple different studies, and even after taking into account other factors. It’s a really consistent finding,” Hancock said.

How to Ease Zoom Fatigue

While individuals can make changes to their own work habits to avoid burnout, the researchers urge organizations to rethink how they manage their remote workforce.

This article was originally published by Stanford University. Republished via Futurity.org under Creative Commons License 4.0.

The City of Santa Ana is planning to remove a homeless encampment after a contract was violated by a non-profit that previously agreed to clear the space. El Centro de Cultural de Mexico, an 837 N. Ross St. […]

Eric Trump, the son of President Donald Trump, tapes his speech for the second day of the Republican National Convention from the Andrew W. Mellon Auditorium in Washington, Tuesday, Aug. 25, 2020. (AP Photo/Andrew Harnik) […]

Dr. Anthony Fauci, the head of the U.S. National Institute of Allergy and Infectious Diseases (NIAID), said that about 40 percent of his agency’s employees have not received the COVID-19 vaccine, while a deputy at […]