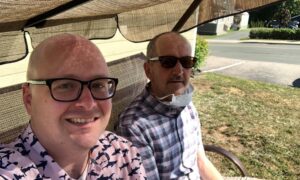 FREDERICTON—Families who fear their loved ones are afflicted with a mysterious neurological syndrome in New Brunswick say they’re losing patience waiting for information from the health officials who are investigating.

“I can appreciate that maybe the government is afraid to give too much information and scare people, but at the same time, not giving information is also scaring people,” said Steve Ellis, whose father has all the symptoms of the mystery illness.

There have been six deaths and 44 suspected cases linked to the brain disease.

According to the New Brunswick Health Department, the first case dates to 2015 but wasn’t identified until early 2020, when a cluster of cases was detected by the Creutzfeldt−Jakob Disease Surveillance System, operated by the Public Health Agency of Canada.

The agency conducts national surveillance for prion diseases, such as Creutzfeldt−Jakob disease, which cause neurological symptoms.

Symptoms of the mystery syndrome in the province include rapidly progressing dementia, muscle spasms, atrophy and a host of other complications. Creutzfeldt−Jakob disease, or CJD, has been ruled out in the New Brunswick cases.

While most of the cases have been identified in the northeast and southeast of the province, it’s unknown if geography is a link. At least one researcher has said a potential cause may be some kind of environmental exposure.

Ellis, who has started a support group on Facebook for the families, says his father, Roger Ellis, 63 of Bathurst, N.B., had no neurological issues before showing symptoms two years ago.

“It was June 2019 when he collapsed at home with a seizure. He went to hospital and within weeks he had a major downhill spiral where he was having hallucinations, delusions, aggressive behaviour, weight loss and almost childlike behaviours,” he said in an interview last week.

Since then, Ellis said his father has undergone a wide range of tests, including a spinal tap, in order to rule out suspected causes. His father now lives in a special care home.

“We thought he was the only one dealing with something like this until only a month ago,” Ellis said. “The worst part is seeing Dad change. The second worst part is not knowing why.”

Ellis said he has been pressing government officials for some answers, but getting no reply. News of the unknown syndrome first emerged through a March 5 memo from deputy chief medical officer of health Dr. Cristin Muecke to the province’s various medical professional associations.

Last week, Health Minister Dorothy Shephard said a website is being developed to provide information to the public, and that it was “expected to go live any day.”

“I’m not surprised because I don’t think they know, but I’m surprised they are not talking to the families more, just to reassure us,” she said.

Her son Andrew, who lives in Riverview, N.B., was just 39 when he started exhibiting symptoms in February 2019.

She said he couldn’t finish sentences or remember names, and by September of that year he was admitted to hospital and subjected to a barrage of tests, including spinal taps, ruling out CJD and a number of other possibilities.

“He could sit down today and learn how to print, but next week he wouldn’t know how to print,” she said. “If this is happening to a lot of people, it’s very scary.”

Jenkins said her son’s neurologist is working with Dr. Alier Marrero of the Vitalite Health Network in Moncton, who is leading the research into the mystery syndrome, but she doesn’t know if her son is included in the study group because health officials have not responded to her.

Marrero did not respond to a request for an interview for this story.

Trina Musseau of Edmonton has been watching the news of the mystery illness with interest after the death of her father, Cedric Mills, five years ago. Mills was 60 when he died in Bridgeport, N.L. He became ill in 2014 after spending 10 summers working in Pennfield, in southwestern New Brunswick, as a fisherman and spraying fishing nets.

“I’ve contacted public health in New Brunswick and Dr. Marrero and I haven’t heard back from either,” she said. Musseau joined the Facebook support group when she saw that her father had exhibited the same symptoms as other people suspected of having the illness.

“They tested him for every disease known to man −− Lyme disease, Parkinson’s, (multiple sclerosis), you name it, they tested him for it,” she said. After his death, his brain was tested for CJD, but the result was negative.

“The doctors said my father was a medical mystery. That’s the term they used,” she said.

Musseau said she has all her father’s medical records and wants to share them with the researchers in New Brunswick, but no one has called her back. She’s hoping that with enough information, doctors can finally provide some answers.

“At this point we’ve lost my Dad and there’s no bringing him back. But if there was one wish that he could have had, it was to know what was wrong with him. That goes for the family too,” Musseau said.

Biden admin. fails to take action with the border

FILE – In this Sept. 17, 2021, file photo a National Guardsman stands guard at a fence that runs along the Rio Grande near the International bridge in Del Rio, Texas. (AP Photo/Eric Gay, File) […]

A girl wears a face mask as students sit in a classroom amid the COVID-19 pandemic. (INA FASSBENDER/AFP via Getty Images) OAN NewsroomUPDATED 3:41 PM PT – Thursday, August 12, 2021 A Georgia […]

MyPillow files $1.6B countersuit against Dominion

MINNEAPOLIS, MN – OCTOBER 10: Mike Lindell, CEO of My Pillow, spoke during a campaign rally held by President Donald Trump at the Target Center on October 10, 2019 in Minneapolis, Minnesota.  (Photo by Stephen […]