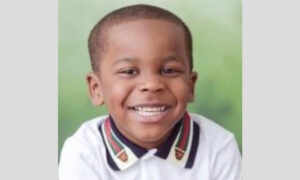 A 3-year-old boy died after being shot at a Miami birthday party, officials in Miami-Dade said over the weekend.

Officials said they discovered the child suffering from an apparent gunshot injury when responding to a ShotSpotter alert, according to a release posted on the Miami-Dade government website on Saturday.

“The officers swiftly placed the 3-year-old in a police vehicle and transported him to the hospital, where he succumbed to his injuries,” said the website’s news release. “As other officers arrived, they discovered a second victim that had also been shot.”

Miami-Dade emergency personnel responded and took the other victim, identified as an adult female, to Aventura Hospital in stable condition, officials said.

“The preliminary investigation revealed that the victims were attending a child’s birthday party at the residence, which is a short-term rental. The subject fled in an unknown direction and remains at large,” according to the release.

According to a report from local media, police said that the property where the toddler was shot was an AirBnb rental in the Golden Glades neighborhood.

Marc Anderson, a neighbor, told Local10 that between 30 and 50 shots were fired.

“People were running, so we ducked behind his truck and some people ran and hid behind these two trucks,” Anderson said, adding that he was working on a truck when the shots rang out.

An investigation into the matter is ongoing. Police said they’re offering a reward of up to $5,000 for tips to help their investigation and that leads to an arrest. Those with information can contact Miami-Dade Crime Stoppers at (305) 471-TIPS.

Commentary We don’t hear much today about the religious doctrine of damnation—the belief that everlasting punishment awaits sinners. How much of that is due to religionists moderating their theological views or simply the ongoing secularization […]

Kids Playing Outside Should Wear Masks

Dr. Rochelle Walensky, who heads the Centers for Disease Control and Prevention (CDC), on Wednesday defended guidance for summer camps that recommends campers to wear masks indoors and outdoors at all times while maintaining at […]