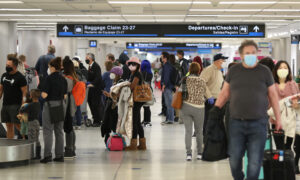 Passengers who want to travel should not have to show proof that they received a COVID-19 vaccine, aviation leaders told lawmakers at the Senate Subcommittee on Aviation Safety, Operations and Innovation hearing on April 21.

Leaders from the aviation industry hope to open up air travel and believe that vaccine passports may help restore consumer confidence in flying again, but requiring such proof should be voluntary and temporary.

“A vaccinating passport, if not mandatory, could be a tool that could be helpful to regain confidence in air travel, but it must be temporary,” said Sara Nelson, international president of the Association of Flight Attendants-CWA.

“It must be focused on COVID-19, it must be voluntary, and we just need to make sure that this is not a mandatory program that keeps certain people from being able to access air travel,” she added.

“Like Sarah said, this needs to be a voluntary program, it needs to be time-limited,” said Calio.

The United States airline industry was hit hard by the pandemic, incurring $35 billion in net losses in 2020, according to trade organization Airlines for America.

Demand for air travel has been on the rise for several months but is still not near the level that it was pre-pandemic.

“Bookings are improving on rising vaccination rates and easing travel restrictions, but some higher-quality traffic will lag—so revenue and financial recovery will lag,” the trade association stated.

Sen. Ted Cruz (R-Texas) voiced his concern about the data privacy and security related to such passports in his opening statement to the subcommittee.

“Concerns have grown throughout the pandemic related to privacy, data security, disclosure of medical records, and what the permissible uses of confidential health information are,” Cruz said. “And I strongly believe that we need to endeavor to address these before we find ourselves in the midst of another crisis.”

Cruz’s state of Texas banned any organization that receives public funding from the state, including private and public institutions, from mandating individuals to prove they’ve been inoculated with a COVID-19 vaccine.

“But, as I’ve said all along, these vaccines are always voluntary and never forced. Government should not require any Texan to show proof of vaccination and reveal private health information just to go about their daily lives,” Gov. Greg Abbott, a Republican, said in a press release on April 6.

At least seven other states have also instituted a ban on vaccine passports, either through an executive order or passing a bill. They are Florida, Georgia, Idaho, Iowa, Montana, South Dakota, and Utah.

Several states like Hawaii welcome a verification program. Democrat Gov. David Ige wrote on Twitter that his state will launch its vaccine passport program on May 11 to allow inter-island travel. Fully vaccinated individuals will not need to quarantine or test negative before flying.

A county in California will also launch its own digital vaccination verification program this month, while New York’s digital app, the Excelsior Pass, has been implemented for almost a month in the state.

The World Health Organization (WHO) has recommended against using vaccine passports for international travel due to growing concerns about the vaccines ability to reduce transmission and the “persistent inequity in the global vaccine distribution.”

The International Air Transportation Association (IATA) also said governments should not require proof of injection for entry into a country as it could discriminate against people who are medically exempt or refuse to get the vaccine.

Freedom Through Leisure in ‘Leisure: The Basis of Culture’

We are a society that all too often focuses on work, but do we ever stop and think about rest and leisure? What constitutes work, and for that matter, what exactly is leisure? German philosopher […]