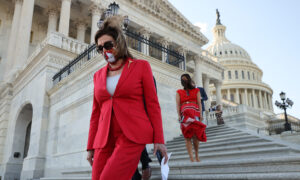 The death on Monday at the age of 93 of Walter Mondale—who may go down in history as the last honest Democratic politician (or the last but one, after his old boss, Jimmy Carter)—has taken me for a walk down memory lane: specifically to “the moral equivalent of war.”

Also known by the acronym of MEOW, it was the hapless Mr, Carter’s attempt, via an idea borrowed from the psychologist William James, to unify and rally the nation on behalf of—what was it again? Oh, right. “The energy crisis.”

Boy, doesn’t that take you back?

It seems that, in 1977, we were importing most of our oil from more or less hostile Middle Eastern countries that had formed themselves into a cartel (known as the Organization of Petroleum Exporting Countries or OPEC) to drive up the price of oil to unprecedented levels, thus crippling our economy, which largely ran on the stuff, then as now.

Since the day 44 years ago when President Carter delivered his MEOW speech, of course, we have learned two very important things.

The first is that, by the use of advanced technologies unknown in the 1970s, we could and would become self-sufficient in and even an exporter of oil.

The second is that crippling our economy by cutting down on our oil production and consumption is, as we now suppose, a good, not a bad thing. This is because cutting out the crude—if everybody else in the world did the same (which, of course, everybody else won’t) over decades and decades—might infinitesimally retard the advance of “climate change.”

What use that may be when the same climate change is now said to be already at “crisis” stage I leave it to the reader to work out for himself.

That Mr. Carter didn’t know these things in 1977, however, is of course not his fault. But even at the time people sort of knew that attempting to drum up “war” fever, with all its implications of national survival, over having to pay a higher price for the oil to which our industrial economy was and is addicted was fundamentally phony.

I remember my widowed grandmother, already in her 90s at the time, writing to me that she had turned the thermostat down in the house she shared with her older sister, aged 97, in accordance with the President’s request. But then she belonged to a generation who knew what a real national crisis was like—and she still expected our national leaders to know as well, and to ask for sacrifice in only the most exigent circumstances.

That Mr. Carter betrayed this trust by panicking over the OPEC oil shock is a lot of the reason why Democrats now panicking over global-warming have to write such sacrifices into law, thus further diminishing our already diminished economic freedoms, rather than asking for the cooperation of the people. They know the people don’t trust them anymore to tell the truth  about such things.

All the same, “the moral equivalent of war” hasn’t gone away. She didn’t use the expression, but Nancy Pelosi clearly thought that there was still some mileage in the concept when she said, in response to the Derek Chauvin verdict: “”Thank you, George Floyd, for sacrificing your life for justice. . .Because of you and because of thousands, millions of people around the world who came out for justice, your name will always be synonymous with justice.”

I am not the first to point out that the word “sacrifice,” used to describe Mr. Floyd’s death under Mr. Chauvin’s knee, is spectacularly ill-judged—as is the “thank you” for a death that poor Mr. Floyd could do nothing either to choose or to forestall.

Reasonable people might conclude that such misuse of ordinary English words extends to her use of the word “justice” as well, since Mrs. Pelosi and many others of her party had from the beginning treated the prosecution of Mr. Chauvin more like an act of revenge than a quest for justice, as the word used to be understood — back in Walter Mondale’s day, all those years ago.

But unlike real soldiers, those pressed into fighting, at least symbolically, and dying, however unwillingly, for the Pelosi-Biden revolution don’t always choose to be or even know that they are soldiers. If their deaths, from whatever cause, can be turned to some account in the on-going effort to politicize everything to their own advantage, that’s good enough for the Pelosi-Biden Democrats of today.

In the Democrat-run city where I live, someone has marked out a plot in one of the riverside parks and erected in it 132 little white flags next to a sign reading:

My immediate reaction was to ask, “Hey, what about all the friends and neighbors lost to cancer or heart disease? There must be a lot more of them. Why aren’t they getting any love or remembrance from the city, or little white flags in the spring sunshine to mark their passing?”

But of course I knew the answer. The virtue-signalers of the left, in Alexandria as in the rest of the country, use the language and imagery of war so promiscuously because they believe they are at war.

And their enemy today is no longer a bunch of Middle Eastern sheikhs but you and I, if we dare to disagree with them—or with their agenda, now being feverishly executed while they control both executive and legislative branches of government, for transforming the country.

James Bowman is a resident scholar at the Ethics and Public Policy Center. The author of “Honor: A History,” he is a movie critic for The American Spectator and the media critic for the New Criterion.

A Special Aircraft and the Men Who Flew It

Russian President Vladimir Putin delivers his annual state of the nation address at the Federal Assembly at the Manezh Exhibition Hall in Moscow on April 21, 2021.  (Photo by MIKHAIL KLIMENTYEV/Sputnik/AFP via Getty […]