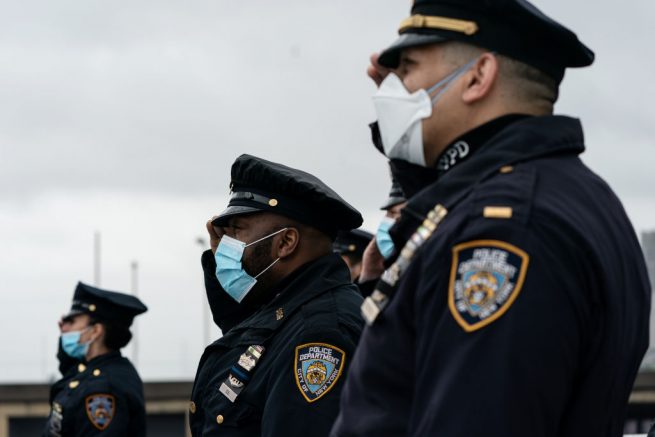 Authorities in New York City are investigating an officer-involved shooting, which left one suspect dead.

Two New York City police officers are recovering from their injuries after doing a wellness check at a home in the Springfield Gardens section of Queens, New York.

According to reports, 41-year-old Sharon Goppy arrived at the 105th precinct early in the afternoon to report an incident of domestic violence against her husband Rondell Goppy. Sharon asked officers if they could help escort her home so she could collect her belongings.

She also said she was afraid of being alone with her husband. Roughly six minutes after the officers arrived on the scene, police said Rondell entered the residence and opened fire.

“After immediately opening fire, and shots exchange, both officers are struck and injured,” NYPD Commissioner Dermot Shea stated. “One in the right upper thigh, he has a fractured femur and is undergoing surgery. The other officer was shot at least one time and we believe at this point in both hands.”

He added both officers are awake and in stable condition at Jamaica Medical Center. Although both require surgery for their very serious injuries, Shea said they’re hopeful for a full recovery.

WATCH as @NYPDShea provides an update about the two Police Officers that were shot in Queens. pic.twitter.com/d0WCQEzosX

Sharon was not injured, but Rondell was pronounced dead at the scene.

Authorities said the suspect had three handguns at the time. They also reported there have been four previous calls regarding a domestic dispute at the same address.

Democrat Mayor Bill de Blasio praised the two officers for their efforts to save Sharon from abuse.

“Today they saved that woman’s life,” the New York City mayor said. “I want to be crystal clear. Because those officers were there, that woman is alive. And I say God bless them.”

This came as Democrat lawmakers continue to push for ‘defunding law enforcement.’ Meanwhile, the president of New York City’s largest police union criticized those who want the police budget reduced as well as those who disrespect police officers.

Today’s events serve as a stark reminder of the dangers police face every single day.

These brave cops were there protecting a domestic violence victim, putting themselves between her and mortal danger. https://t.co/YHRpnzQtuz

Authorities will continue to investigate as they work to recover evidence from the crime scene.

The arrest of an Alberta pastor and his brother under a new public health order as they were heading home from church has serious implications for people’s rights and freedoms, a political scientist and author-researcher says. […]