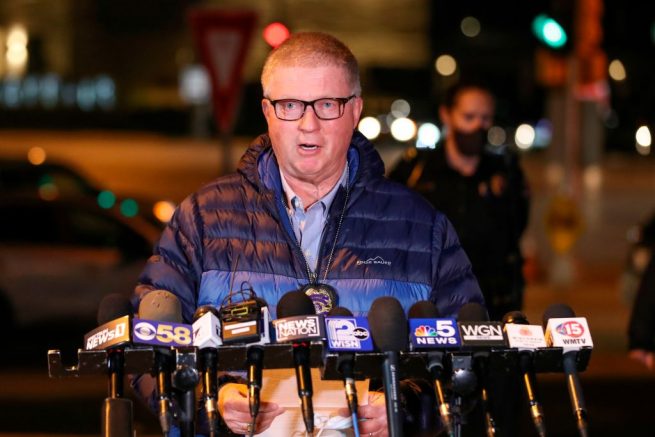 Wauwatosa Police Chief Barry Weber provides an update on a shooting that took place at Mayfair Mall in Wauwatosa, Wisconsin, on November 20, 2020. – Multiple people were injured in a shooting at the US mall on November 20, according to local media, with victims rushed to hospital but no fatalities immediately reported. (Photo by KAMIL KRZACZYNSKI/AFP via Getty Images)

The Wauwatosa Police Department made an arrest in connection to the recent shooting at Mayfair Mall, which left multiple people injured.

On Sunday, Police Chief Barry Weber announced officers arrested a 15-year-old Hispanic male. Weber said the teenager has not been identified nor have photos been released in order to preserve the investigation.

Authorities also recovered a firearm, but is unclear whether it was used during the shooting. Officers said the shooting took place after an altercation between two groups, which also injured four innocent bystanders.

“We’ve seen this in the past, where people have come to the mall and seem to want to settle their scores,” Chief Webber stated. “We do know that there was some sort of altercation and then that’s when the bullets started flying.”

In the meantime, witnesses and family members are speaking out about the tragic experience in Friday’s shooting. Bianca de las Reyes said she was working inside of Macy’s when someone suddenly dropped to the floor.

Seven adults and one teenager were shot. All of the victims were rushed to the hospital and are expected to make a full recovery, but several family members said they raced to the mall to check on their loved ones’ safety.

“Why would people do this, just run into a crowd and start shooting for no reason?” a victim’s cousin questioned. “I’m concerned about my cousin of course, but at the same time, I’m furious about this incident…why would you put people at risk?”

A number of locals expressed fear for the community’s safety amid such violent acts.

“Definitely happy that there were no fatalities, but at the same time the impact of these incidents extends far beyond the people that were directly injured,” Reggie Moore, Director of Milwaukee Office of Violence Protection, stated. “This is an injury to our entire community.”

While the Mayfair Mall has officially reopened to the public, the Milwaukee Trauma Response Team offered to counsel any families that were in the mall at the time of the shooting.

Students arrive by bus at Foundation Preparatory School for their return to school during the coronavirus in New Orleans on Monday, Oct. 12, 2020. (Chris Granger/The Times-Picayune/The New Orleans Advocate via AP) OAN NewsroomUPDATED 1:55 […]

President Joe Biden is scheduled to meet South Korean President Moon Jae-in at the White House on Friday, with a senior administration official saying that the two leaders’ discussions will highlight the “ironclad alliance” between […]

OAN NewsroomUPDATED 7:59 AM PT – Wednesday, January 26, 2022 KellyAnne Brooking, a 13-year-old conservative, is speaking out against mask mandates after getting booted from her middle school for defying COVID-19 orders. Brooking spoke with […]