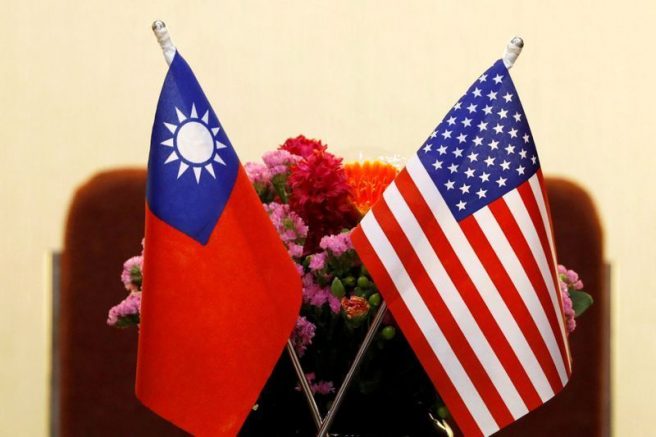 FILE – Flags of Taiwan and U.S. are placed for a meeting in Taipei, Taiwan. (REUTERS Photo/Tyrone Siu)

A U.S. Navy admiral recently made an unannounced visit to Taiwan, marking a high-level trip that could stir things up with China. Although Taiwan is a democratic and self-ruled island, Beijing claims it as its own territory.

The U.S. is Taiwan’s biggest international backer, although it has no formal diplomatic ties with the island. Support has only increased under President Trump, including a boost in arms sales. However, this latest visit could spark a furious response from China.

Back in August, Beijing scrambled fighter jets near the island when U.S. Health and Human Services Secretary Alex Azar visited the capital city of Taipei. It repeated the maneuver for a high-level U.S. State Department visit a month later.

It’s still not clear whether Admiral Studeman’s visit will be seen as an escalation by Beijing, but he could be one of the highest-ranking U.S. military officers known to have visited Taipei in recent years.

Taiwan media reported on a US high-level intelligence officer visiting Taiwan. China’s position on the relevant issue is consistent and clear: we firmly oppose any forms of official exchanges and military contact between the US and the Taiwan region. pic.twitter.com/7SrghEeryp

One analyst said that he knew of “no precedent for such a visit,” but a former defense official said the Pentagon has been sending one-star officers to Taiwan on a routine basis.

RELATED: China warns of action after Pompeo says Taiwan not part of China

Biden vows to crack down on Russia if they are responsible for recent hacking of over 200 U.S. companies

(Photo by MARK RALSTON/AFP via Getty Images) OAN Newsroom UPDATED 5:40 PM PT – Thursday, December 17, 2020 As the number of coronavirus deaths continues to grow, one coroner said many of the deaths listed […]