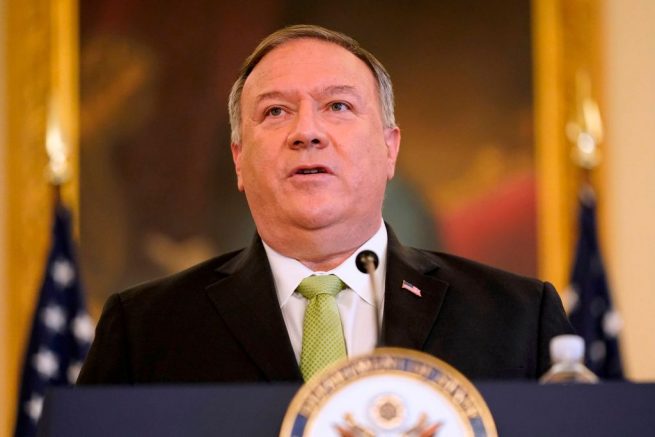 US Secretary of State Mike Pompeo speaks during a news conference to announce the Trump administration’s restoration of sanctions on Iran, on September 21, 2020, at the US State Department in Washington, DC. (Photo by PATRICK SEMANSKY/POOL/AFP via Getty Images)

On Wednesday, Secretary of State Mike Pompeo announced the sanctions in a statement and targeted three officials and a so-called charitable organization over their roles in a crackdown on anti-government protests last year.

A year ago, Iran’s regime massacred as many as 148 Iranians in Mahshahr. Today, I designated Heidar Abbaszadeh and Reza Papi for their role in gross human rights violations by Iranian security forces as well as other agents of regime oppression. We will never forget their crimes.

Pompeo said the Iranian regime maintains its grip on power through brute force, with no concern for the well-being of the Iranian people. The U.S. Secretary of State also mentioned Iran losing influence thanks to new agreements like the one between Israel and Bahrain.

“These agreements also tell malign actors like the Islamic Republic of Iran that their influence in the region is warning that they are ever more isolated,” Secretary Pompeo said. “And shall forever be until they change their direction.”