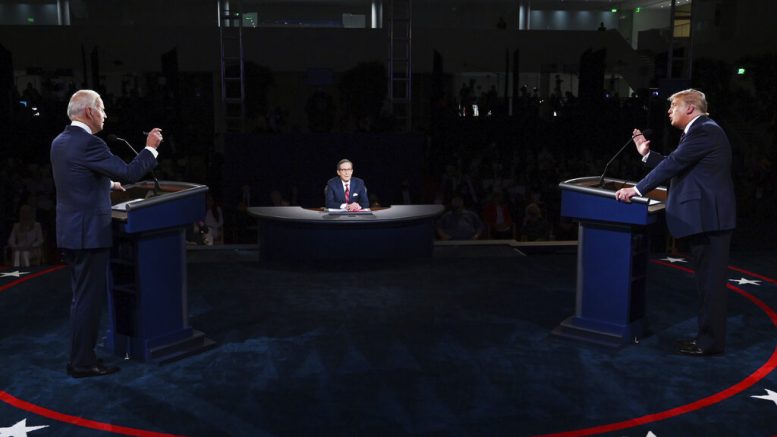 With their podiums being spaced out for social distancing, President Trump and Democrat presidential nominee Joe Biden traded blows during the first presidential debate. Facing off for the first time Tuesday in Cleveland, Ohio, the President and Biden addressed the issues voters consider to be most important.

While addressing the COVID-19 pandemic, the President responded to attacks from his Democrat opponent by highlighting the close work he has carried out with researchers to ensure all Americans have access to an effective vaccine. He also pointed out political motivations on the other side of the aisle are hindering development.

“Well, I’ve spoken to the companies and we can have it a lot sooner,” President Trump stated. “It’s a very political thing because people like this would rather make it political than save lives.

The President also defended the importance of a strong economy in any crisis.

Meanwhile, Biden highlighted his tax plan for companies while promising to reverse the tax cuts implemented by President Trump.

“By the way, I’m going to eliminate significant number of the tax,” said the former vice president. “I’m going to make the corporate tax 28 percent, it shouldn’t be 21 percent.”

Biden’s defense of so-called “equity” was brought up again when the conversation shifted to national unrest.

“Yes, there is a systemic injustice in this country in education and in work and in law enforcement and the way in which it was enforced,” he stated. “…But there are some bad apples and when they occur when they find them they have to be sorted out.”

The President, who has used the phrase “law and order” as a rallying cry during the election, said Biden wasn’t capable of saying much less enforcing “law and order” in the cities facing violence.

“It’s crazy what’s going on and he doesn’t want to say ‘law and order’ because he can’t because he’ll lose his radical left supporters,” stated President Trump. “…But if he ever got to run this country and they ran it the way he would want to run it…our suburbs would be gone.”

Joe Biden said “I am the Democratic Party right now.”

But when he was asked whether he lifted a finger to tell Democrat mayors to stop letting far-left rioters destroy their cities, he lamely said, “I don’t hold public office now.” pic.twitter.com/EIbIR49J0n

While shifting focus from order in our cities to the highest legal court in the land, the President maintained his position that it was his constitutional responsibility to carry out his duties for a full term. This is a stance also held by late Justice Ruth Bader Ginsburg.

The candidates will have a second chance to discuss the issues during the second debate on October 15 in Miami, Florida. One America News will provide full coverage of the event.

Four North Carolina deputies who were placed on administrative leave in the aftermath of the fatal shooting of Andrew Brown Jr. have been permitted to return to duty after body-camera footage showed that they didn’t […]

America First Legal (AFL), a group led by a former Trump adviser, has criticized a proposed grant priority by the Biden administration seeking to promote controversial racial concepts in the classroom. AFL submitted a formal […]

FILE – In this April 16, 2020, file photo, President Donald Trump speaks about the coronavirus in the James Brady Press Briefing Room of the White House in Washington, as Dr. Deborah Birx, White House […]